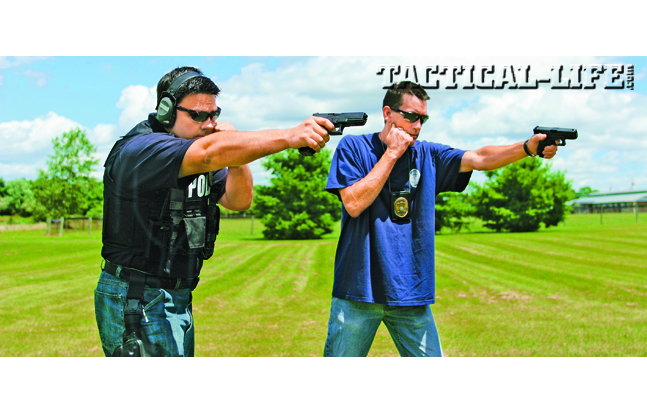 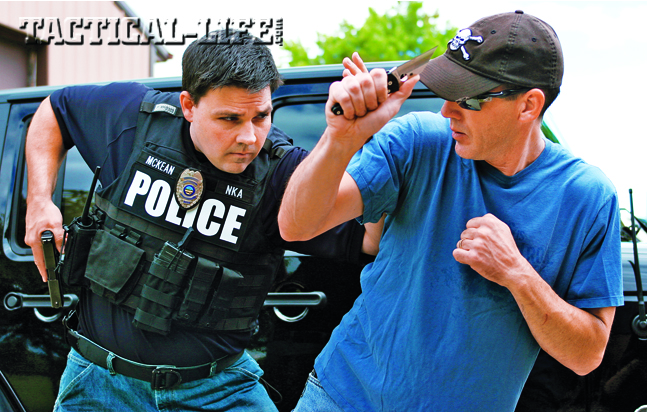 2 of 4
One-Handed Shooting | Gunfighting 2
In extreme close quarters, you may have to defend against an attack with one arm before accessing your weapon. 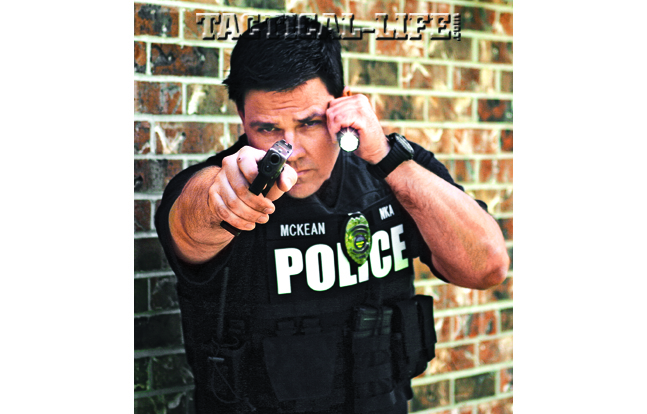 3 of 4
One-Handed Shooting | Gunfighting 3
Training to shoot one-handed can allow you to be more effective with a flashlight. Cant the pistol if needed for more torque. 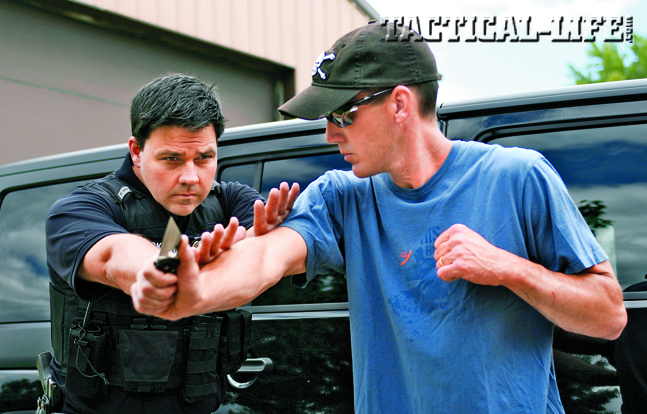 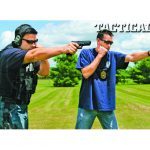 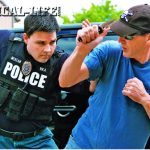 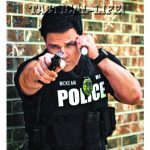 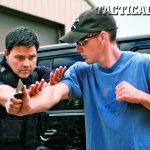 The need for effective, one-handed shooting skills has been demonstrated time and time again. You only have to peruse one of many police-related magazines or websites and you will quickly find several incidents in which officers were shot in their primary gun hand. These officers had to transition to their other hand to neutralize the threat.

Also, remember that life happens! A friend of mine broke his primary gun hand a short period of time before attending an advanced three-day, handgun class. This class was already paid for and was only scheduled once a year. Instead of waiting a year, he went through the class and, due to the cast on his strong hand, only used his non-primary gun hand. If you carry or shoot a gun, especially on a regular basis, then one of life’s many surprises may cause you to have to be able to operate, manipulate and accurately fire a gun with only one hand.

There are three additional factors you need to consider when it comes to becoming proficient with one-handed shooting. These factors are off-hand shooting, the startle response and third-party protection.

Probably the biggest challenge to being able to effectively shoot with only one hand is doing so with your “off hand,” “weak hand” or “non-gun” hand. I personally believe that using these words or similar vernacular creates an unconscious handicap in the minds of many people. What we are telling ourselves is that if we are right-handed, then our left hand is basically useless by itself. This couldn’t be further from the truth, especially if we spend some of our range and training time using the other hand!

Getting comfortable with your “other” hand can and should start with solid, consistent dry-fire practice. When done safely, this training starts to build muscle memory, especially when it comes to your grip. A one-handed grip does come with some inherent disadvantages, so you may find that you have to hold the gun slightly different in one hand as opposed to the other.

This was the case with me. I tried and tried to get my one-handed grip to be the exact same no matter which hand I was holding the gun with, but it felt so wrong and really affected my accuracy on the range, especially when firing multiple-shot strings. Through hundreds of dry-fires and live rounds, I have found a one-handed grip for each hand that works naturally and repeatedly for me with a high degree of accuracy.

Since the majority of my law enforcement career has taken place in the dark, I have spent a lot of time training for and researching low-light combat as well as weapons handling. Preferred methods for flashlight use usually bring about the same emphatic zeal that pistol calibers, gun manufacturers and muscle cars tend to do. Most everyone has a method, maybe two at most, that they ritually use and will defend that method to the very end.

Another consideration for the use of a flashlight and one-handed shooting is the effective use of cover. The first priority in maximizing cover means exposing as little of yourself as possible while providing you with the greatest field of view possible. This priority becomes even more of a challenge in a low-light setting. To use cover to the greatest extent possible, you may have to use the flashlight hand independently from your gun hand.

You can easily challenge this principle safely in training. Grab a couple of buddies, turn the lights off in the training room and do some force-on-force training. Use your favorite method of flashlight-handgun use and see how you do against live opposition. Take time to compare notes and techniques with the other participants. Also be willing to try other methods as well. Not only will you develop your skills to greater effectiveness, but I believe you will also discover that some methods work better than others in certain situations. I know that I did, and now I tend to transition between three or four different methods during a single building search.

There are many situations in which a police officer or armed citizen may not have the opportunity to get two hands on the gun before needing to fire it multiple times. In fact, this reality has actually affected the firearms qualification requirements at many police departments. The specific requirement that I am referring to is known in many circles as close-quarters retention shooting. This is where the officer has to draw his or her pistol, pull it tight to his or her body and fire several rounds into a target that is just a few short feet away. This qualification simulates a startle response to a threat that is up close.

But what about longer distances? What I have learned is that when a person is startled and this person does not already have their gun out, the tendency is to draw his or her gun and immediately drive it towards the threat while firing. The person who was startled then fires one or two shots one-handed before bringing their second hand to the gun, if they do so at all. Distance from the threat is usually not a factor when a person is shooting after being attacked. Their subconscious mind takes over, and they react to the threat presented.

When speaking with those involved in a stressful situation, whether it is in training or a real-world event, it is not uncommon for the person who fired their gun one-handed to not even realize that he or she had done so. I have even seen participants argue that they never fired one-handed until they were shown video evidence. For a person who consistently trains and shoots two-handed, it is hard to comprehend that he or she would ever shoot one-handed under stress.

Consdering the situations faced by officers, I think that third-party protection principles should be a regular part of everyone’s training and thought process. Going through your day, take an honest look at what you do with your hands. Notice how many times throughout the day that you have something in at least one of your hands and that hand is occupied to the point where you would not be able to get both of your hands on your gun.

When it comes to protecting another person, you may have to steer or direct that person away from the threat while you meet it. Many times, directing another person’s movement is done with one hand while you are using your gun in the other hand in order to stop the threat. If a threat is presented at extreme close-quarters, essentially within arm’s reach, your immediate response may require you to employ an empty-hand technique to disrupt the attack. Then, once the initial attack is thwarted, you can draw your firearm in order to neutralize the threat. Many times the close-quarters retention shooting position mentioned earlier will have to be used in order to do so.

Having the skills, ability, and willingness to use your firearm one-handed greatly increases your odds during a violent encounter. Being able to do so with either hand essentially doubles your odds of prevailing during such an encounter. Make one-handed practice and training a regular part of your firearms regimen. Your life, or the life of someone that you care about, may be at stake. 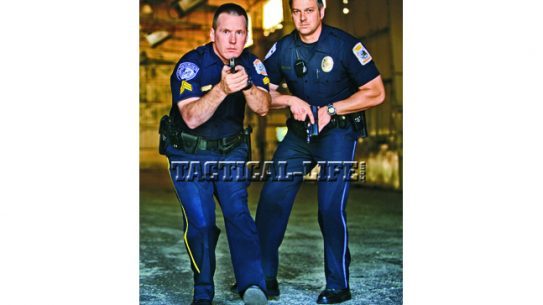 Make the right choice when picking a patrol sidearm — it can mean the...