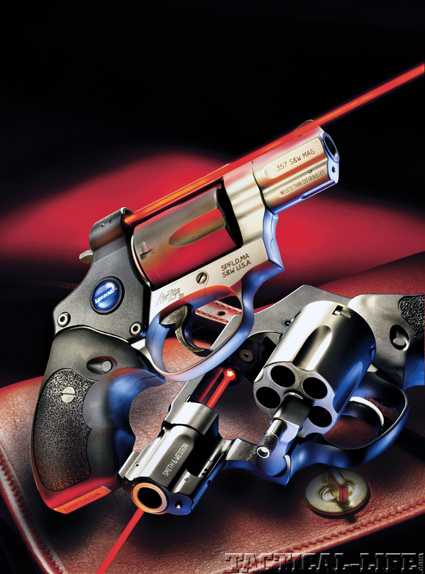 When it comes to personal protection and home defense, it pays to use the accessories that can help increase accurate shot placement, such as LaserMax J Max grips, rubber grips, night sights and fiber optic sights. Ichiro Nagata Photo

When you are unfamiliar with the different kinds of firearms that can be used for personal protection and home defense, selecting your first weapon can be overwhelming. You want to make the right choice. More importantly, however, you need the right training to use the gun properly.

I had to go through this process when I advised my wife, my daughter-in-law, my two sons and other novices and less knowledgeable shooters who needed different degrees of assistance when they wanted to select firearms for protection. While all of this is second nature to me, I recently got my wife to kick things up a notch and transition to a semi-automatic pistol in addition to the .38 Special revolvers that she is already comfortable using.

Transitioning
Because my wife now suffers from a touch of carpel tunnel syndrome, she is only barely able to retract the slides on my 9mm SIG 228, my 9mm SIG 226 Navy Model, my 9mm Glock 17 and my friend Larry’s 9mm Glock 19. So far, between the SIGs and the Glocks, my wife clearly shoots a 9mm SIG 228 the best. Naturally, I hope that with continued training it will become second nature for my wife to use the decoking lever to lower the hammer and make her pistol safe if she ever has to fire a few rounds from the 9mm SIG 228. I also plan to continue to train my wife to use my 9mm Glock 17 in lieu of the Glock 19, which produced too much felt recoil for her liking.

My other concern is that my wife may not be able to clear a stoppage or execute a slingshot combat reload in the event that one magazine worth of ammunition is not enough to take care of a serious threat. The important thing is that my wife wants to become a more proficient shooter.

Even when I had my wife operate my Beretta Model 70S .22 LR caliber Mossad Pistol or a full-size stainless steel 9mm Springfield Armory 1911, we still ran into problems. My wife had to deal with the slide-mounted, thumb-activated safety lever that needed to be lowered when it came time to discharge a SA (single-action) pistol. This could be a serious problem because anyone who delays or forgets to lower the slide-mounted thumb safety lever on any SA pistol can lose their life in a deadly force situation.

Tricks Of The Trade
Personally, I was hoping that my wife would find it easy to manually operate the slide on either a soft shooting 9mm Glock or a 9mm SIG 229 with a DAK trigger so she would not have to worry about decocking a cocked hammer once she stopped firing a DA/SA 9mm SIG 228 or SIG 226. Unfortunately, the problem with a DAO or DAK pistol is that you have to override the hammer when you rack the slide to rear on an unloaded pistol. One trick that I showed my wife is to point a DA/SA SIG pistol in a safe direction then cock the hammer before she manually racks the slide back, while keeping her finger out of the trigger guard. I showed my wife this method of operation because I knew she would never be able to rack the slide on a DA/SA pistol without some help.

The bottom line is that after trying every option at my disposal, I have come to the conclusion that my wife is better off using a Smith & Wesson six-shot .38 Special revolver for personal protection and home defense. Even if she is physically unable to reload a DA/SA 9mm SIG pistol, in a real emergency, she can accurately empty a 14-shot 9mm SIG 228 into a man-sized target at 10 to 21 feet. 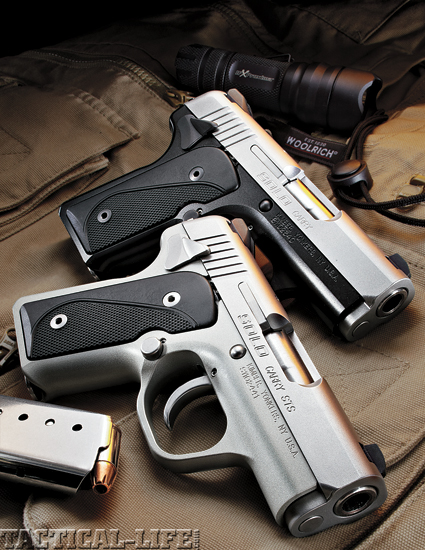 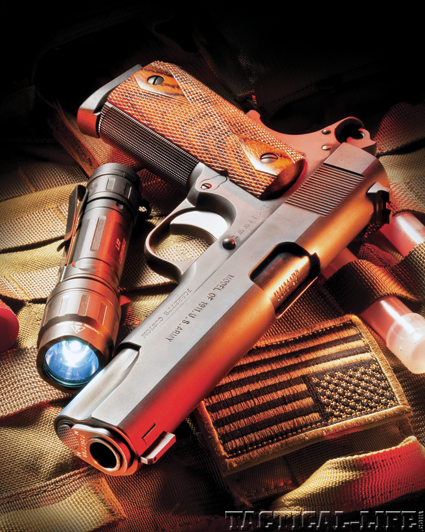 Home Alone
My wife is not the only member of my family who I have had to help with issues regarding trying to find the right handgun. When my oldest son—who is a city police officer—got married, I wanted my daughter-in-law to be well armed and protected when our son was not home. Since her father is a retired police sergeant my daughter-in-law is someone who has been around firearms her entire life.

As soon as my daughter-in-law became a member of our family, I wanted to make sure that the daughter my wife and I always wanted to have in our family was able to protect herself with a handgun. One comment that I made to family members was that using a pistol equipped with an accessory rail makes it possible to attach a tactical light to your sidearm so you can have one hand free to carry a child to safety or call 911 with a cell phone. It is also harder for an intruder to reach out and grab your handgun than it is to reach out and grab a rifle barrel or a shotgun barrel as you walk by a room in a dark hallway.

I initially loaned my daughter-in-law a five-shot S&W Model 60 .38 Special revolver, but the trigger on J-frame S&W wheel guns can be on the heavy side (except for the Centennial models). Even though the trigger on the six-shot .38 Special Model 64 with a 2-inch barrel that she used for a while was a dramatic improvement, the pistol my daughter-in-law ended up liking the most was a 9mm SIG 229 with a DAK trigger, with night sights and an accessory rail. When she trained more and proved that she could kick things up a notch, my son gave his wife a SIG 229 with night sights and a DAK trigger in .40 S&W caliber to use for personal protection and home defense. 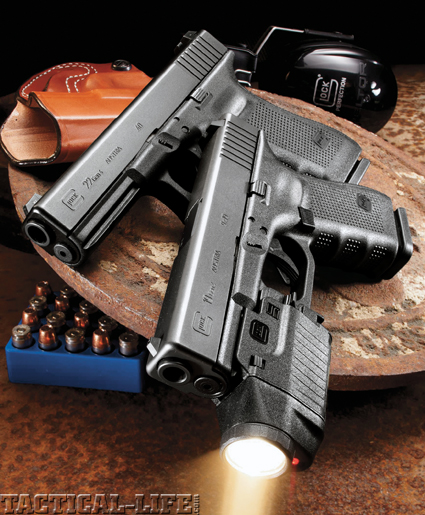 Gaston Glock has been handling civilian shooters’ needs for decades. Shown are two new Gen4s: Glock 22 in .40 and a Glock 19 in 9x19mm. Steve Woods Photo

Training My Sons
As the father of two sons who are now 29 and 24 years of age, I know what it is like to train your children to safely and effectively use various kinds of firearms for personal protection, recreational shooting and home defense. I started training our sons to shoot at an early age because they grew up in a home where firearms were “accessible” and always present because I was a police officer who later went on to make a career as a federal agent in the U.S. Customs Service.

When my sons were old enough to comprehend the true meaning of the word “hot,” I decided it was time to let them know that when it came to firearms the rules in our home were very simple. Rule #1: My sons could ask to inspect, touch and even hold any of my issued or personally owned firearms, as long as they were unloaded and I was present. Rule #2: My sons would never violate rule number one until they were old enough to legally own, possess and carry firearms on their own.

After displaying my collection of issued and personally owned firearms, I began to teach my sons about different handguns, rifles, carbines, submachine guns and shotguns. We had these show-and-tell sessions on a regular basis. My plan was to take the mystery out of the handling of firearms by letting my sons know that my guns were the tools of my profession, and that they required a certain level of proficiency in order to be possessed. After I explained how various firearms worked I let my sons physically examine and handle every firearm in my collection. I also let them watch me clean my firearms to show them the importance of properly maintaining your equipment at all times. When the time was right—a parent will know that time—I took them shooting and trained them to become proficient marksman. 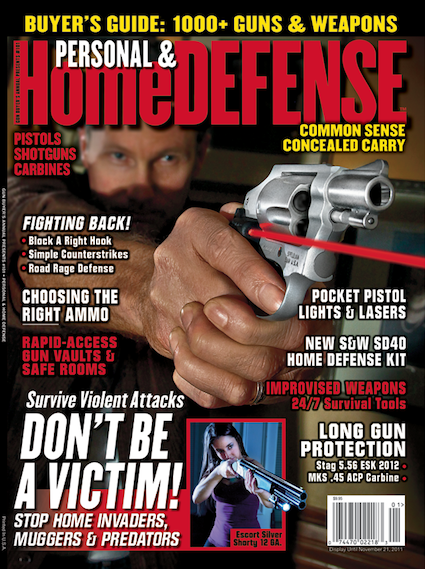 I started training my oldest son at age 8 to safely operate and shoot a Walther PPK in .22 LR caliber. Later on, when both of my sons were old enough to train together, I issued them a pair of Beretta Model 70S .22LR “Mossad” pistols with two spare magazines each. I also allowed my sons to train with a pair of six-shot single-action Colt Peacemaker revolvers with fixed sights in .22 LR caliber.

Once my two sons displayed an appropriate level of skill and they expressed the desire to kick their training tempo up a notch, I laid out a course of fire in a remote area in the high desert that could only be accessed by a 4×4 vehicle. For safety purposes, I had both of my sons walk through the course of fire with me by their side so they knew the layout of the training area. Initially, I had each of my sons run through this maze of arroyos and hilly terrain by themselves. I stayed close by to relay commands and keep an eye on my sons as they engaged numerous targets and executed two combat reloads while taking the appropriate cover. When they were ready, I had my sons operate as a team with me close enough behind them to intervene if either of my boys forgot the safety rules. As a father, I was very impressed with the way my two sons performed individually and as a team.

Once my sons got a bit older we started training with law enforcement service handguns in various calibers such as 9mm, .40 S&W. .357 SIG and .45 ACP. Both of my sons did well and eventually completed college and became armed professionals who carry Glock pistols on a daily basis.

Train hard for the responsibility of carrying a firearm that you may be compelled to use to protect life and property.

When it comes to personal protection and home defense, it pays to use the…