by Tactical-Life
in Tactics & Training
0

GATOR WHISPERING
As part of changes to the 2012-2013 Statewide Hunting Proclamation, the Texas WPD has adopted rules permitting the use of suppressors for hunting alligators, game animals and game birds. Those choosing to use suppressors for hunting must comply with federal NFA regs. “These devices are already legal for hunting feral hogs, and there is no resource- or enforcement-related reason to prohibit these devices for hunting alligators, game animals or game birds,” said TPWD Assistant Chief of Wildlife Enforcement Scott Vaca. (tpwd.state.tx.us)

SUPPRESSOR SCHOOL: Created by AAC, Can U is an interactive website designed to educate the general public about current suppressor laws and regulations. Complete with an Undergraduate section for civilians and a Graduate section for dealers, Can U will teach you everything you need to know about suppressors, from benefits to legality, and functionality to history. Upon completion of the “courses,” you will take a short “Final Exam,” after which you will forever be a member of Can U. With your Can U membership in hand, you will have access to special deals and discounts that your friends can only dream about. (aaccanu.com)

LOUISIANA BICENTENNIAL RUGER
Louisiana celebrates 200 years of statehood this year. Lipsey’s, located in Baton Rouge, has decided to recognize this milestone anniversary by producing a limited edition commemorative Ruger 10/22. Lipsey’s wanted to celebrate the state’s distinct heritage, diverse culture and the freedom of the Second Amendment the state offers its residents. The .22-caliber Bicentennial Ruger 10/22 features custom etching and engraving of the official Louisiana Bicentennial logo on the rifle’s hardwood stock. Only 198 have been produced, and the suggested retail price is only $289. (lipseysguns.com; 800-666-1333)

BARRETT RAISES $69,415 FOR HAVA
To help celebrate 30 years in business, Barrett teamed up with the Honored American Veterans Afield (HAVA) for a charity event that invited consumers to donate and enter for a chance to win a 30th-year tribute M107A1. The nickel-Teflon-coated .50-caliber rifle was engraved with the Barrett 30th Anniversary logo and the denotation “Rifle 1 of 1.” This piece of history is marked serial number 30 and came packaged in a Pelican Storm Case complete with a specially designed foam insert. A man from Houston, Texas, won the rifle, and the event raised $69,415. All of the donations benefitted HAVA. (barrett.net; 615-896-2938) 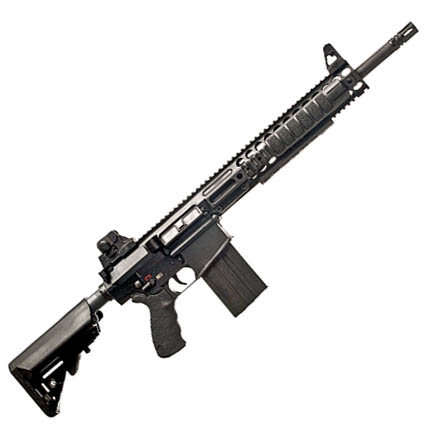