What would happen if you took some of the foremost experts in shooting, fighting, and carrying a revolver and put them in the same place for three days? You’d get the 2021 Revolver Roundup, hosted by Gunsite.

What is the Revolver Roundup?

As it’s properly called, the 2021 Pat Rogers Memorial Revolver Roundup, was the third year of a training event that focuses on shooting and carrying a revolver. It was founded by Darryl Bolke and Wayne Dobbs of Hardwired Tactical Shooting. In 2021 the event moved to the legendary training facility Gunsite Academy. The Roundup’s three day format is breaks down into different blocks, with each instructor teaching multiple two hour blocks on their given area of expertise.

I was deeply honored when Darryl asked me to teach a block at 2021’s event. Being included in a group of instructors as talented as this represents the pinnacle of my shooting career. Each instructor focused their block on specific areas that they had personal, real world experience with. Blocks were also complimentary; a shooter could learn manipulations from Mark Fricke, fundamentals from Wayne Dobbs, then speed shooting a revolver in my block. Or on a concealed carry track, Darryl covered pocket carry, and Chuck covered ankle carry in a separate block. Former LAPD officer Dave Dolan had an excellent block on real world deep concealment. Dave also has an unbelievably good eye for spotting a concealed gun on a person, a skill he picked up from decades of undercover work in Los Angeles.

One of the most interesting blocks of instruction in the 2021 Revolver Roundup was a talk given by Darryl about the guns used during the killing of Bonnie and Clyde. As Darryl puts it, “I love The Highwaymen movie, but they got a lot wrong.” Even ardent history buffs would learn a thing or two from his talk.

2021 saw the Revolver Roundup move from Dallas to Gunsite Academy. If you’re not familiar with Gunsite, a search on this site alone will turn up tons of background information. But to save you time, Gunsite is the single most important training site in the firearms community. Gunsite is where the Modern Technique of the Pistol was born, where Jeff Cooper taught, and it still carries his legacy to this day. Events at Gunsite feel special. Maybe it’s the connection to history, maybeit’s the facility itself, or maybe it’s something in the water. Regardless of the feeling, Gunsite is an impressive facility. The Roundup spread out over four of its ranges, one of its shoot-houses, and the classroom facility.

I ​was able to observe several blocks of training across the three days, in addition to teaching my blocks on training days 1 and 2. The training that I observed was Wayne’s fundamentals, Chuck Haggard’s block on living with revolvers in the real world, Darryl’s pocket carry, and Greg’s strong hand only shooting block. Each block was jam-packed with what might be considered lost knowledge, if it wasn’t for these instructors trying to preserve it. See, the heart of the Revolver Roundup isn’t just teaching, it’s about preservation.

T​here was a time when revolvers were tactical; they were the primary fighting weapon for American law enforcement. But because this time was before the internet, before all knowledge was digitized and packaged online in a slick 5-minute YouTube video, the tricks of the trade of fighting and carrying a revolver run the risk of being lost to time. And those tricks are just as relevant today as they were in the 1920s-1980s, because revolvers still have a place as a primary weapon for armed citizens. Obviously, in a world of 20 round semi-automatic pistols, carrying a revolver involves a level of compromise. But one of the lessons from the Revolver Roundup is how to manage those compromises while maximizing what that the revolver does better than a semi-automatic pistol.

The largest crowd of any block gathered on training day 3 for Chuck Haggard’s ballistic gel tests. Understanding how bullets react in a consistent medium is important when you’re attempting to make informed choices about self-defense ammo. Many modern hollow point bullets don’t expand when fired from extremely short snub-nosed revolver barrels. This is why many of the instructors at the Revolver Roundup carry full wadcutter target bullets in their small 38 Special revolvers. The projectile penetrates well and has minimal recoil, even if it doesn’t expand. One of the most interesting test results from the gel tests was with Federal 158 grain lead round nose ammo. In Chuck’s tests, this common projectile would yaw 180 degrees in gel and end up backwards near the back of the block. This produces a permanent wound cavity that’s significantly larger than what you’d normally expect from a LRN projectile.

T​he event will be back in 2022, once again hosted at Gunsite. It will be even bigger and better than 2021’s Roundup, with more opportunities for training, shooting, and preserving the knowledge of the wheelgun. 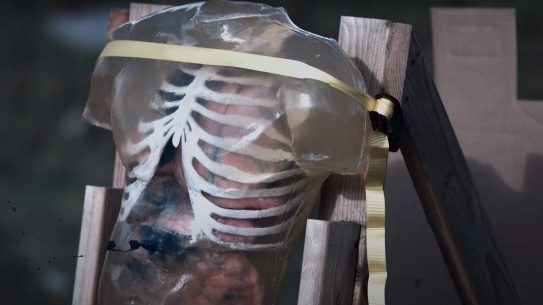