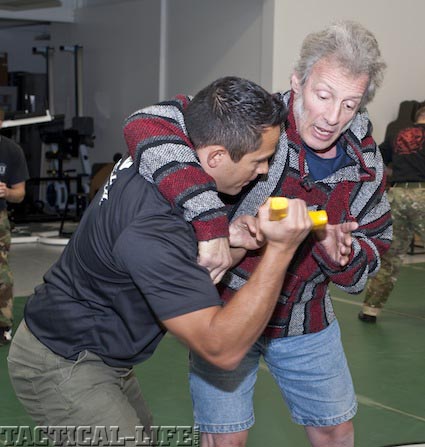 Schools of Thought—and Action
Jared Wihongi’s experience in the Pekiti-Tirsia family of Kali is long and impressive. He also has an extensive background as a tactical operator. Jared brought all this together when he created the Pekiti-Tirsia Tactical Association, and through it he has been training operators in knife, baton and weapons techniques. Although originally geared toward military officers and tactical teams, his training also translates to the civilian world.

Meanwhile, Marc “Crafty Dog” Denny and the Dog Brothers Martial Arts are well known for the simplicity and real-world applicability of their teachings and, above all, for the short learning curve. Their Die Less Often series of videos is the epitome of simple and effective self-defense. There is no need to be a Kali expert in order to apply Marc’s techniques. 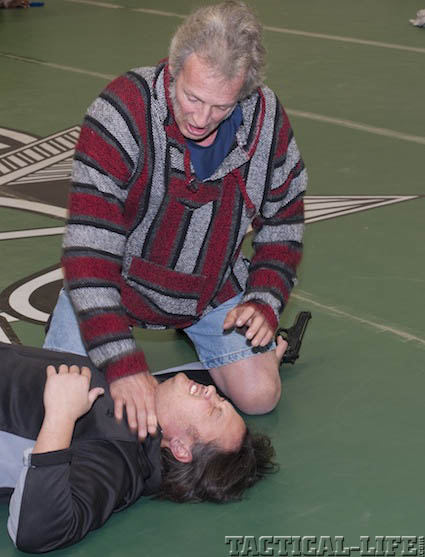 Gaining the Advantage
Marc’s emphasis is on what works “with the least amount of skill necessary.” In fact, he constantly points out the need for uncomplicated tactics that can be applied under high-stress and high-adrenaline conditions. The whole idea is to end the fight as fast as possible, which means that simplicity and efficiency reign—there is just no time to apply a complicated series of classical movements. 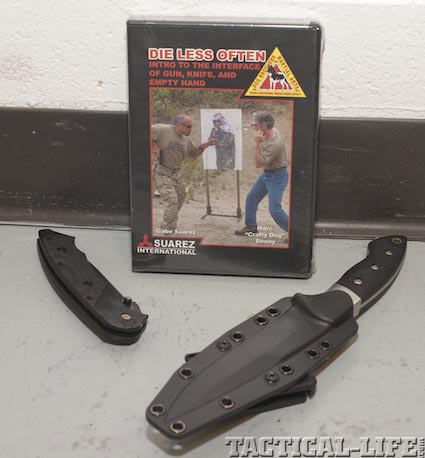 Starting with the unarmed defender, Marc points out the need to read the pre-confrontation signs. It is often difficult for good people to start the conflict. In fact, most often they are reacting to conflicts that have already started. By reading the signs, you’ll be able to get ahead of the curve. Hesitation will get you killed, so recognizing these signs is critical, whether or not you carry a weapon for work or self-defense. Many attackers will first clench their fists, look away from you or tense up. Someone taking a stance or martial arts posture is also a good pre-confrontation sign. Be aware, and give yourself as much time as possible. 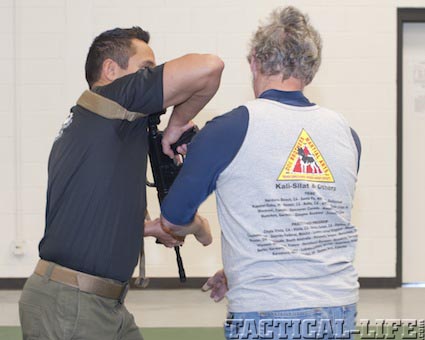 On the premise of taking some preemptive action, training is all about moving quickly and decisively. You want to take a position behind the aggressor—Marc tries to get to this position whenever possible. In most cases, it is a true advantage, especially with weapons. It all starts with Marc’s “dog catcher” method, a simple means of stopping and redirecting a truly motivated threat, almost without regard to where he or she attacks. Grab the attacking appendage and move in—it is simply about gaining a position of advantage. After stopping the attack, it’s time to redirect it. Marc also teaches a couple of great disarms that are simple, practical and easy to execute and require no previous martial arts knowledge. Once students are proficient at gaining a positional advantage unarmed, weapons are added to the equation. If you are carrying a gun, rather than fight for control of a knife you want to gain position and bring your handgun to bear. 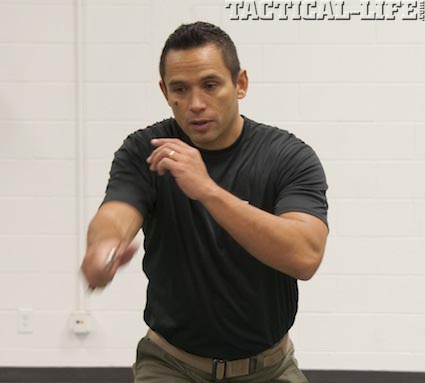 By the end of the day, we were applying these techniques, including several means of gaining control of aggressors and removing their weapons. It was a great day: We got some very simple and effective tactics to put in our tool bags.

Strikes & Thrusts
Given Jared’s time in classical Kali, he starts with using the stick. He demonstrates how all the techniques are based on the same movements—the item in hand is the only thing that changes. Using the fundamental concepts of Filipino martial arts, three basic strikes and some basic thrusts were practiced. These first involve sweeping moves across the body. With a stick, the movement is a strike; with a knife, a slash. The strikes are simple thrusts, which allow you to thrust forward then reverse the weapon and thrust in the reverse position.

Utilizing the same movements, Jared teaches how the pistol can be deployed as an impact tool. Nothing new to learn here, just a different tool. The same slash, same thrust movements are used. This is really a strong lesson in reality. Whether a professional or simply defending your home, deadly force is not always justified—situations are fluid. 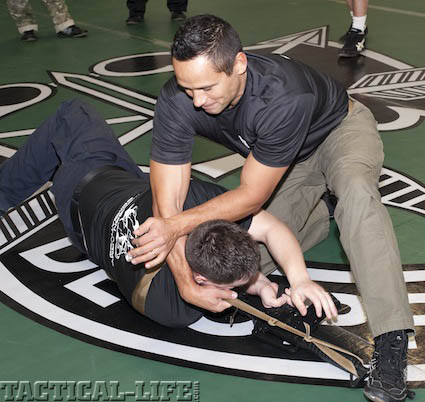 Long Gun for Impact
Lastly we moved to the long gun. For the most part, the movements are the same and enable you to use your rifle or shotgun as an impact tool. This training provides a solid base for the next step: using your weapons against someone who may attempt to use them against you.

It is certainly never good when you find yourself fighting for your life, against an armed aggressor. Nor do you always have time to bring your weapon immediately to bear—you may need to control your assailant’s weapon first. The idea here is to win the fight, and that may require hands-on action to gain an advantage. Jared and Marc provide as many different methods as possible, to do just that. Many training sessions include this type of training with a handgun but seldom with a long gun. For an officer or someone who uses a long gun often, this is really good stuff. The techniques were simple to learn, easy to apply and very effective. Unlike many that require complicated series of movements, these were fast, brutal and effective. Following the same methods as before, you trap the weapon by grabbing it and moving into your opponent. At that point, it is all about getting behind them and getting them to the ground. When it comes to handguns, same thing—grasp, control and gain the positional advantage. 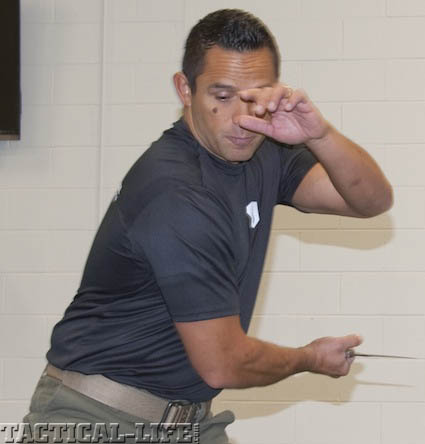 The Roundup
Both Jared and Marc are incredibly well-trained and qualified fighters. Their backgrounds include decades of traditional training supplemented with less-structured application. More importantly, they are excellent instructors, and their material was easily understood and well thought-out. For more information on training with Jared Wihongi or visit facebook.com/pages/Pekiti-Tirsia-Tactical-Association. Dogbrothers.com. 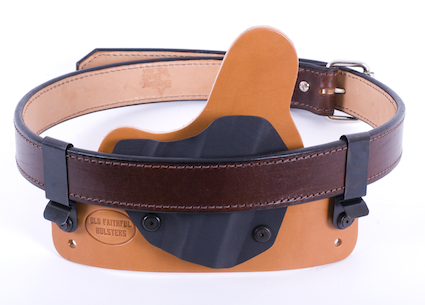