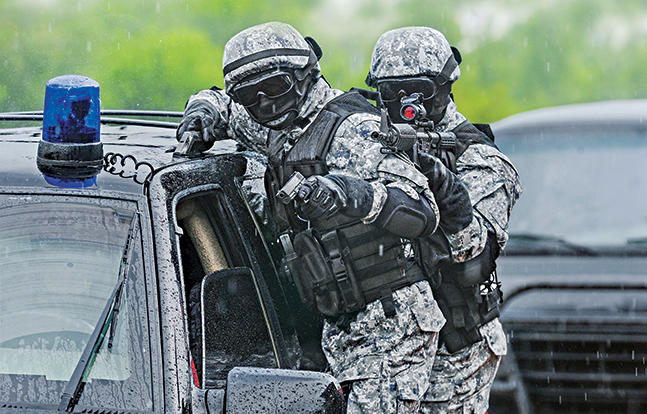 1 of 2
Survival Tactics of First Responders at the ILEETA Conference
The 10th Annual ILEETA conference offered insight into modern threats facing LEOs, such as active shooters and how officers must work together to stop the threat. 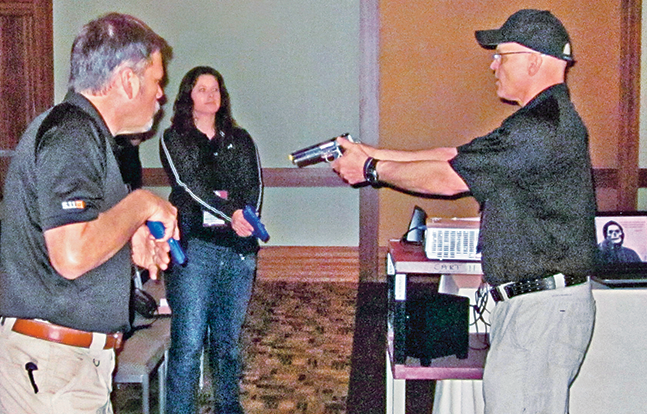 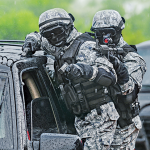 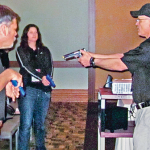 The 10th Anniversary Conference of the International Law Enforcement Educators and Trainers Association (ILEETA) drew more than 700 police trainers from all over the U.S. and several other countries. It was an inspirational opportunity for all of us to “recharge our batteries” with the best and the brightest in the profession. There were also sad goodbyes: Shortly before the seminar, Sgt. Brian Stover passed away, only a day before his scheduled retirement. A master instructor in multiple disciplines, Sgt. Stover worked for the Los Angeles County Sheriff’s Department and did much good work for ILEETA, and before that, for the American Society of Law Enforcement Trainers (ASLET).

Since “The Job” often puts you in “damned if you do, damned if you don’t” positions, ILEETA gives instructors tools for explaining their officers’ actions to the public and the courts. In an excellent presentation on police/media relations, Rick Rosenthal told us of Case One, in which a department spokesman did a perfect job of explaining why his officers had done what they did. Then, when the reporter said they were done, the cop and reporter chatted comfortably, with the lawman now leaning back in his chair with his feet on the desk. The camera was still running, though, and the TV station showed him in that position with his voice from earlier playing over it. “It made him look overly casual in dealing with a serious matter,” Rosenthal pointed out. The lesson? You can never be sure what’s “on the record.”

Risk management expert Steve Ashley pointed out that police instructors can be their agencies’ best risk managers. He cautioned that excited utterances in the heat of the moment can come back to haunt cops as well as criminals, citing Case Two. Here, the pursuit of a dangerous escapee ended with the suspect hanging off a bridge. He was Tased, lost his grip, fell a considerable distance and was seriously injured. In a world of turned-on microphones, one officer was recorded saying, “See that [expletive] fall?” Another officer was recorded saying, “Some idiot up on the bridge shot him with a Taser.” None of this helped the involved department in the subsequent lawsuit.

Police were already dealing with severe training budget shortfalls when the “ammunition drought” hit. Many agencies reported projected waits of nearly a year before their ammunition orders would be in. Case Three: a Federal agent reported that ammunition was in such short supply, it looked as if his agents would only have enough to qualify with in the coming year, not enough to actually train with. Case Four: a federal agent from another organization mentioned that his agency was looking at cutting firearms qualifications from quarterly to three times a year.

“An entire panel of experts was devoted to responding to mass murderers in public places, with emphasis on the role of first responders.”

Many of the instructors suggested dry-drawing and dry-firing time, while others were purchasing airsoft equipment for training purposes. Some recommended that rather than eliminating training sessions when ammunition was short, the time be used to emphasize hand-to-hand and weapon-retention drills. Defensive tactics and firearms instructor Larry Hahn gave an excellent block on teaching action/reaction principles and retention methods with dummy guns. He cited Case Five, in which a deputy’s dashboard camera recorded him being shot in the face during a “routine” traffic stop. The deputy went down, and his attacker jumped from the car and tried to shoot him again, but his pistol had jammed. He pistol-whipped the cop, then tried to get the officer’s Glock. The wounded officer successfully retained his pistol, then drew it and took the fight to his opponent. The attempted murderer is now serving a 60-plus-year sentence. The officer survived and went back to work.

An entire panel of experts was devoted to responding to mass murderers in public places, with emphasis on the role of first responders. We were reminded of Case Six, in which Deputy Justin Garner was able to shoot down a mass murderer in a retirement home, using his Glock .40 service pistol to drop the shotgun-armed suspect at a range of 114 feet. And Case Seven, where the first responder to a mass murder at a USAF base was a lone officer on bicycle patrol, Andy Brown. Under fire from a man with a drum-fed, semi-auto AK-47 rifle at 70 yards, Brown was able to fatally shoot the man and end the killing with just his Beretta 9mm service pistol.

Many on the panel noted that the current term “active shooter” poorly describes these incidents. “Active killer” is the term preferred by panelist Ron Borsch, the retired SWAT cop who pioneered the lone-officer protocol for first responders aggressively hunting down such murderers. We were told that the Department of Justice is now using the term “active threat” for these incidents. Nor is “shooting” per se involved in all such attacks. As the conference hosts were setting up, Case Eight took place on a college campus near Houston, Texas. Armed with a box-cutter-type “razor knife,” the perpetrator slashed 14 victims.  And none of us needed to be reminded of the horrors of Case Nine, the September 11, 2001, terrorist attack perpetrated by multiple suspects armed with box-cutters.

ILEETA membership is open to those who train in the law enforcement/corrections/criminal justice community. Visit the ileeta.org website to see the incredible breadth of the training offered. For example, each conference includes multiple full instructor certification schools in various disciplines, and assorted armorer’s schools. This column barely touches the surface of the treasure trove of cutting-edge information that the International Law Enforcement Educators and Trainers Association has become world-famous for delivering to our LEOs.

This article is respectfully dedicated to the memory of Sergeant Brian Stover of the Los Angeles County Sheriff’s Department. 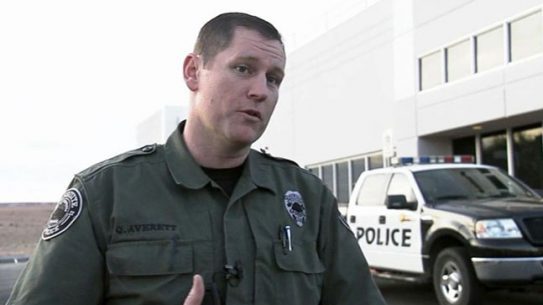 Boy saved from choking on Jawbreaker candy as an officer from Nevada's Mesquite Police...