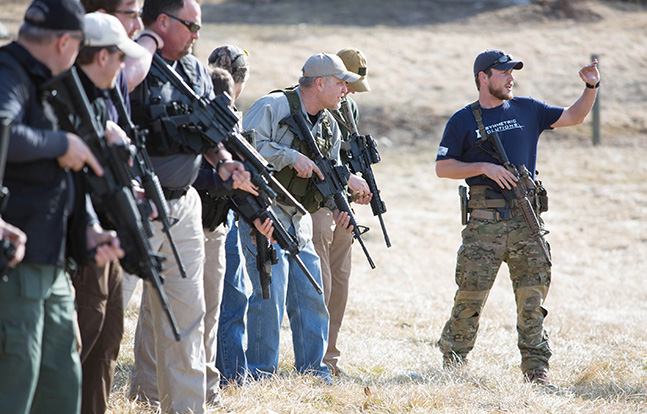 The saying “a man who represents himself has a fool for a client” can apply to self-taught firearm shooting range work. As a youth, while I enjoyed shooting and could generally hit what I wanted, I wish very much that I could have learned from a real shooting instructor who could have expanded and improved my abilities early in my shooting career. Instead, I picked up some horrendous habits. Later on in life, I tried competing at local matches and realized I had no chance against other shooters with proper training. Honestly, I almost gave up shooting and did not touch a gun for years. However, there were not a lot of experienced tactical shooters back then. Now, with so many LE and military operators turning their experience back into the shooting community, there is a plethora of opportunities to have excellent, knowledgeable and superbly qualified instructors teach gun-owners the right way to shoot.

One of those top-tier instructional facilities is Asymmetric Solutions in Missouri, just south of St. Louis. Asymmetric Solutions has a full compound of 1,800 acres in a wooded valley that includes classroom facilities, a live-fire shoothouse, several pistol and carbine ranges and even a long-distance rifle range. Asymmetric Solutions instructors are all experienced operators with backgrounds in the most elite military units; not only can they talk the talk, but they have walked the walk. There are no “one-tour wonders”—just seasoned professionals dedicated to helping shooters seeking to better themselves. Their course offerings cover a broad range of experience levels. Some courses are designed to help seasoned warriors prepare and perfect their skills, while others will warmly welcome new gun-owning civilians, both men and women, looking for help in asserting their right of self-protection and defending their own “castle.”

The primary name behind Asymmetric Solutions, Grady Powell, is a familiar one that came to the public’s attention first on the NBC show Stars Earn Stripes (winning the competition for his selected charity, the USO) as well as being chosen to represent the military on the National Geographic Channel’s Ultimate Survival Alaska. He and his friend and Asymmetric Solutions coworker, Jared Ogden, successfully worked through some very tough and demanding challenges in the Alaskan forests in unforgiving weather—all under the camera’s unrelenting eye. Grady Powell, who is as nice as he seems on TV, is a former U.S. Army Special Forces soldier (a second-generation Green Beret) who served several tours in Iraq and West Africa. Jared Ogden is a graduate of the U.S. Naval Academy and a former U.S. Navy SEAL officer. He operated in both Afghanistan and the Arabian Gulf, and was awarded the Bronze Star (with a “V” for valor) while with SEAL Team One. The other great instructors at Asymmetric Solutions have equal (or better) qualifications under their belts.

I attended two carbine classes at Asymmetric. The first course, Carbine I, covered the basics of using a carbine, while the second course, Carbine II, dealt with advanced carbine tactics, including working in groups.

The basic carbine class consisted primarily of shooters who had never experienced any previous firearms training at all but wanted to learn, right off the bat, the best techniques and habits possible. Like most professional training organizations, the instructors didn’t talk about whatever they wanted; they used the established and formalized Asymmetric Solutions curriculum, which has been developed through years of use and experience. I didn’t find talking heads waxing about pet peeves, personal preferences or lengthy war stories, but professional instructors who admitted that, in many instances, there are different ways to succeed, that what works best may differ between shooters, and that they always learn from their students as much as their students learn from them.

“They show you how to be fast and smooth at the same time. They teach stuff that will stay with you forever and give you skills that will help you stay alive.”

The Carbine I course begins with basic points of performance, including safe weapon manipulation, obtaining a solid stance and grip, target acquisition and discrimination, and understanding and managing recoil. Within these parameters, Powell slowly brought up the student shooters’ confidence, capabilities and marksmanship—first by using the underrated technique of dry-fire practice. Powell first demonstrated each of the elements to the students with an unloaded carbine. His carbine of choice is a 10-inch-barreled Black Rain Ordnance PG in 5.56mm NATO with a drop-in BRO trigger, a Hex muzzle brake, a 9-inch modular handguard, a Magpul stock and an Aimpoint CompM4. After first showing each technique, Powell then had the students perform under his watchful eye. As a result, each student began to develop the consistent and correct muscle memory to position themselves and their carbines for first-round hits. Over and over, the students practiced with their empty guns so that, even when they were fatigued, they correctly presented their carbine regardless of whether the threat was ahead, behind them, to the left or to the right.

Powell also showed us how to reload to mitigate the loss of fine motor skills that occurs during high-stress incidents like a timed match or in the heat of a firefight. Throughout the day, the students, using established Asymmetric Solutions metrics, were taught dynamic techniques to improve their performance using training aids that can be found in most homes, with each successive drill building on what was already presented. Some of the other skills included shooting and moving, alternative shooting positions, efficiently dealing with malfunctions and how to properly select and use available cover and concealment. It all culminated in a skills challenge where students had to demonstrate that they absorbed the material presented and qualify to attend higher-level courses and receive more advanced training.

During the weekend I was with Asymmetric Solutions, they ran several other courses, including a basic women’s defensive shooting course, a class for people wanting to obtain a Missouri CCW permit, a winter survival course and an AK operator’s class. Those were all run in addition to the carbine courses, which included close-quarters combat in their multi-room shoothouse and advanced carbine skills where students learned how to operate as a mobile, efficient team. The cadre also performed a live-fire demonstration involving an explosive breach, a dynamic entry and the clearing of a multi-room structure. It was all loosely based on the Osama bin Laden SEAL operation. Operators and instructors conducted the real-time exercise to show students the results of developing extensive tactical skills. The tight team maneuvered through and dominated the “hostile” structure using their heavily practiced marksmanship—each member effectively used their weapons to place lethal shots exactly where needed.

Utilizing superb training facilities, such as Asymmetric Solutions, is crucial if you have made the decision to take an active role in the security of yourself and your family. Although there were a few novice shooters with their new “Christmas guns,” most course attendees were experienced shooters. Some were even seasoned shooting competitors.

The large number of repeat students serves as proof of the training’s usefulness as well as the satisfaction of attending. One Asymmetric Solutions’ recurrent alumnus was Steven Stielow, who was learning how to better use his FN SCAR 16S with an EOTech 512 holographic sight. Stielow noted, “The instructors are awesome. You can’t get any better than this. They show you how to be fast and smooth at the same time. They teach stuff that will stay with you forever and give you skills that will help you stay alive.”

Another great reason for participating in organized, dynamic training became apparent when I witnessed a good parent, Steve Mensing, and his son, Brian, shooting side-by-side on the range, both learning how to better handle their carbines. I asked Steve about why he had brought his son to this training class. Mensing said, “I have taken several classes with my son so we can share a common interest and have quality time together.”

As I have seen at shooting events all over the country, the shooting sports can be just as much a family event (even more so) than accompanying them to soccer or baseball games, as you can stay right with your son or daughter and enjoy an exhilarating experience. Also common in the class were couples and paired friends having fun, which highlighted their boost in knowledge, the confidence resulting from meeting a challenge and the satisfaction of learning a difficult skill. When asked if the class was worth it, one attendee laughed, saying that the cost and time spent taking the class was “kind of like playing a round of golf with your pals, but learning new skills instead of breaking your putter across your knee on the 14th hole!”

As with any shooting class, all the attendees started as individual shooters but ended as friends. Each student bonded with other shooters over the exuberance of success, the sound of ringing steel and the smells of gunpowder. They all walked away pleased with their group effort to be better as a result of the superb instruction by the great guys at Asymmetric Solutions.

American Tactical has introduced its new Omni-Hybrid AR-15 Pistol chambered in 5.56mm with a...