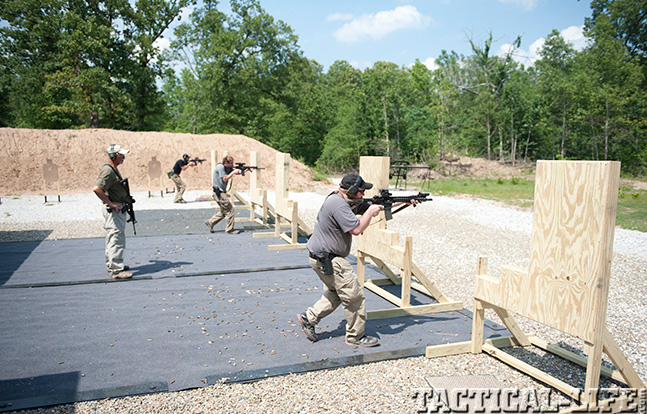 Over the course of the last couple years, the 9mm round has experienced a pretty consistent increase in popularity. Many are giving up their issued pistols in .40 caliber in favor of a personally owned 9mm pistol. Subcompact 9mm pistols are quickly supplanting many of the small .380 pistols so popular before. Even tactical teams are moving to high-capacity 9mm pistols. This scenario is playing itself out all over the country, and for good reason.

Although I carried a .40 caliber on occasion, the majority of my career was spent with either a 10mm or .45 ACP pistol. I never jumped on the .40-caliber bandwagon and never saw the point. As a longtime 10mm fan, the .40 simply seemed less effective. Providing no definitive advantage over a .45 ACP in terms of effectiveness, .40s typically had higher capacities. And considering the accuracy level of many shooters, that simply translated to more rounds to miss with. The accuracy potential of the 9mm was clear, but bullet construction at the time was such that effectiveness, at least in theory, was compromised. The 9mm offered reliability, as many of the early .40-caliber pistols were prone to malfunctioning. In all, I’ve been a longtime advocate of the .45 ACP with a love for the 10mm Auto and a moderate appreciation for the 9mm.

“Hackathorn acknowledges the value of topping off your gun, but only when there is a lull in the fight or it is over. During the fight, you shoot, reload, shoot and repeat as necessary.”

Time, age, and a huge improvement in the manufacture of ammunition have caused a bit of a shift for me, however. Penetration and bullet weight retention are now roughly equal amongst 9mm, .40 and .45 ACP ammo. In my world, that makes the 9mm a far more viable option. It adds capacity, retains reliability and accuracy, and has a couple of added bonuses. Ammunition is less expensive and recoil is minimal, especially with a 1911 or other full-sized pistol. The lack of recoil not only makes follow-up shots easy, but it lessens the wear and tear on the joints for those of us who shoot all the time. As a dyed-in-the-wool 1911 guy, I just needed to find a platform in the 9mm chambering that worked.

The 1911 pistol in 9mm has been around for decades. For years, it was quite the collectors’ piece, with a few seeing some more mainstream use. With factory magazines, they were mostly reliable, but choices were few. As more divisions in competitive pistol sports are created to accommodate carry pistols, the 9mm cartridge came back with a bit of a vengeance. It was time for me to see if one of these could make it through a solid test. All the time on the range has taken a toll on my elbows, so a move to a tactical 1911 in 9mm seemed like a logical step—it just needed to work.

I was already planning to attend a three-day pistol/carbine course taught by one of the most experienced instructors on the market, Ken Hackathorn, at Bill Wilson’s Circle WC Ranch in Texas. There simply is no one better at wringing out a 1911 pistol than Hackathorn, and considering Bill Wilson would also be attending, this was sure to be a great experience. Wilson Combat is back-ordered for months, so a new pistol was out of the question. But luckily Bill Wilson allowed me to use one of his 9mm CQB pistols.

The Wilson Combat CQB is one of the best-selling pistols in the company’s lineup. It is a no-nonsense combat pistol with a minimalist approach. Chambered in 9mm, this pistol is a 5-inch-barreled, full-sized, all-steel version of the CQB. The pistol features a high-cut frame with 30-lpi checkering on the frontstrap and mainspring housing. A combat mag well was added to facilitate magazine changes under pressure.

My test CQB also had a crisp and predictable 4-pound trigger and Wilson Combat’s Bullet Proof internal parts. A single-sided safety was installed as well as a slightly oversized magazine release. The slide was simple and housed a match-grade, fully supported barrel. The match-grade barrel was held in place with a matching bushing and a standard guide rod and spring. For targeting, the pistol used a green fiber-optic front sight and a Wilson Combat’s Ultimate Speed Sight at the rear. The pistol was coated in a grayish, flat Armor-Tuff finish and given black G10 Starburst grips. I was also provided six Wilson Combat 10-round magazines.

The class was set up as an intermediate/advanced class with two days of pistol training and one day with carbines. Along with the 9mm CQB, I used my Primary Weapons Systems (PWS) MK110 with a few additions, including a Triad flash suppressor and a Wilson/Rogers Super-Stoc.

Ken Hackathorn has served as a small arms instructor with the U.S Army Special Forces, the FBI, and he has trained tactical units all over the world. His LE training background is extensive, and he remains a deputy. As one of the first instructors at Gunsite, he has been providing training for well over 35 years. Using his experience in the field, his training is completely dedicated to practical application.

Given that Hackathorn is a founding member of both the IPSC and IDPA, he certainly understands the pistol game, but his emphasis is on what works in a fight. He starts by making a clear delineation between a shooting and a gunfight. It’s pretty simple: In a gunfight, people are shooting back. That dynamic is huge and changes much of what you do.

The first day of the course focused on accuracy and properly manipulating the pistol. Hackathorn likes to make sure all your manipulations are accomplished without ever losing sight of the threat. So all the reloading and clearance drills are accomplished with the pistol in your “workspace.” This lets you do what is needed to stay in the fight without losing track of whomever you are fighting. We practiced reloading from slide-lock and talked a bit about tactical reloads. Hackathorn acknowledges the value of topping off your gun, but only when there is a lull in the fight or it is over.

“The last day, pistol training began with the use of some tape. The front and rear sights were taped up to make a point.”

The second day of the course focused on movement. Most people tend to move when being shot at, so this day was spent performing the previous day’s skills while on the move. Hackathorn also believes that everyone needs to be able to shoot one-handed. The hands and extremities are often the first things struck in a gunfight, especially if you serve on an entry team. Your arms are attached to the gun, and that is what people see and shoot at. This means you need to be able to stay in the fight with one hand. Most of Hackathorn’s drills were performed strong-handed, weak-handed and on the move.

We brought out the rifles in the afternoon, and Hackathorn’s philosophy remained consistent. He likes his equipment simple and reliable, with as few bells and whistles as necessary. Red-dot sights and optics are encouraged, but only with backup iron sights in place. Hackathorn even prefers that the irons are up and ready for use. If the rifle is brought to bear and the red dot fails, there may not be enough time to flip up your sights. Having them at the ready means they can be accessed immediately, and this will keep your eyes accustomed to looking for them.

The last day, pistol training began with the use of some tape. The front and rear sights were taped up to make a point. Although Ken is a strong advocate of using the sights when you can, he recognizes that you may not be able to. By using a solid and repeatable stance and hold, you can still be very accurate. This is a good way to acquire and practice a natural point of aim. Removing the tape made most of us that much more accurate.

That afternoon we transitioned back to our rifles, engaging targets from 25 to 100 yards from various positions. The rest of the day was spent moving in and around the nicest barricades I have ever seen. Reloading, clearance drills and other manipulations were completed as needed. Hackathorn also spends a good chunk of time shooting the rifle from the off-hand side.

Ken Hackathorn has a fantastic demeanor when teaching. He is relaxed, confident and clear. Stress was added through the use of time constraints and some mild competition—there was no yelling or other distractions. All of Hackathorn’s instruction is born from real-world experience, and it made complete sense. I’ve attended many other schools where Hackathorn’s tactics have been taught, and it was truly enjoyable to learn them from the original master.

The CQB was flawless. It was a true joy to shoot. After three solid days and a good 600-plus rounds, there was no pain in my elbows. The CQB was incredibly accurate and operated perfectly. I used three different types of 9mm ammunition, yet there were no issues or failures.

Hackathorn did a great job, and anyone heading into harm’s way should seek him out at Alias Training & Security. His tactics are simple and proven. You’ll come away with drills you can practice at home. 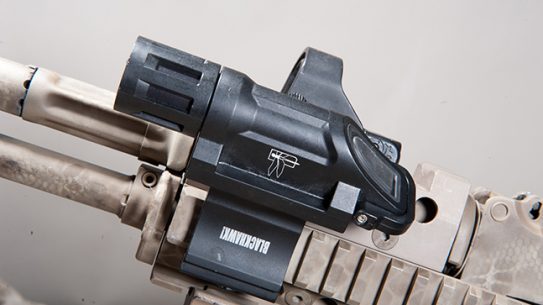