by Len Waldron
in Tactics & Training
0

Days two and three of Dynamic Carbine 2 built both on the first day and the first course (Dynamic Carbine 1). Haley and Costa put the class through drills and created scenarios that utilized the same set of fundamental weapons manipulation skills, but required the shooters to work in two and four man teams as well as make decisions on target choice. Movement with weapons increased and the transition to secondary weapons was a part of each drill. 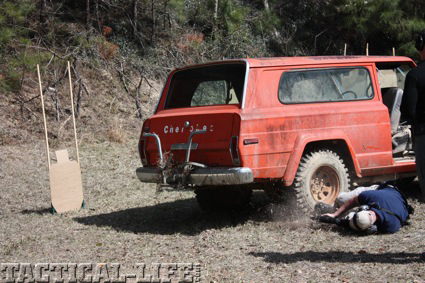 MagPul Dynamics student fires from the urban prone aka -urban fetal position- from against the wheel of a vehicle.

As advanced shooters, the Dynamic Carbine 2 students are expected to cover one another for reloads, movement and weapons malfunctions. Commands of “check” (cover my area as I am working on my weapon or reloading), “ok” (I heard you and am covering your area while you work), and “ready” (my gun is up and back in the fight) now fought through the constant controlled chaos of the increasingly complicated shooting scenarios. Shooters learned about themselves, their shooting skills and their reaction to stress and adrenaline with each variation. The instructors (Haley, Costa and Olivella) did an impressive job of maintaining control and safety as students pushed their limits on marksmanship, concentration and endurance. 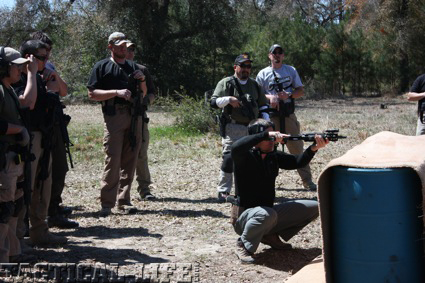 The final and much anticipated set of drills revolved around vehicles. A Toyota Camry and Jeep Cherokee were rolled onto the range and students ran drills that required firing pistols from inside the car, efficiently exiting the vehicle, and sourcing the carbine from the trunk or back seat to engage threats both close-in and at distance. Real-life scenarios such as car-jackings and stalled vehicles were rehearsed and practiced. The drills were challenging but fun, made so in no small measure by the coaching and in-character “coaxing” from the instructors who managed to customize stress for each student. 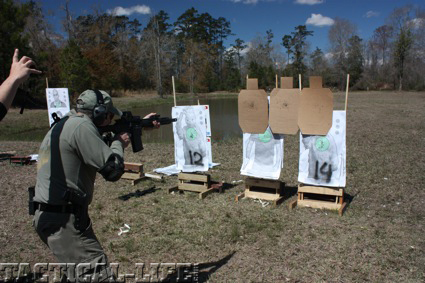 After six straight days of training, I was physically smoked. But the skills I learned from MagPul Dynamics have made me not just a better shooter, but more importantly a confident shooter mindful as much of his surroundings, abilities and limitations as any single technique or tactic. 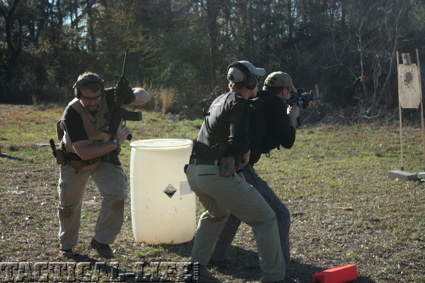 Student team shoots and moves as Haley applies stress to the drill. 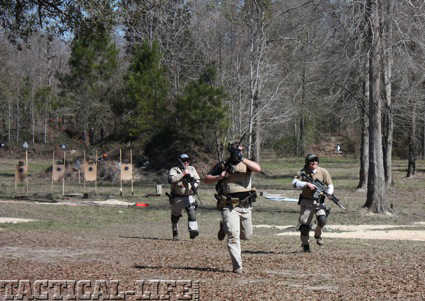 MagPul students sprint back to a secondary firing position in a team movement drill.

Five things I learned at MagPul Dynamcs’ Dynamic Carbine Course.
1. Consistency equals improvement.
2. Chris Costa’s beard can deflect small arms fire.
3. Shooting is an upper body event. Tight core equals tight groups.
4. It is inadvisable to get into a gun fight with the Louisiana State Police (Troopers swept most of the speed and accuracy contests…in both courses).
5. Secondary weapons: Quick to the gun sure of your grip, quick to the draw sure of your sights.