This article was originally published by Coffee or Die on Feb. 20, 2021. For more stories like this, visit www.coffeeordie.com.

The names Elmer Keith, Jeff Cooper, and Jack O’Connor are legend in the shooting world. If you Google “famous gun writers,” they’re among the top results. If you scroll a good ways, you’ll come to a fella named Ed McGivern. The only thing he ever wrote of note is a tough-to-find book called Fast and Fancy Revolver Shooting, published in 1938. However, a lot of police officers and federal agents across the US back in the 1930s knew McGivern well from the training they received from this one-time trick shooter and legendary pistol expert. 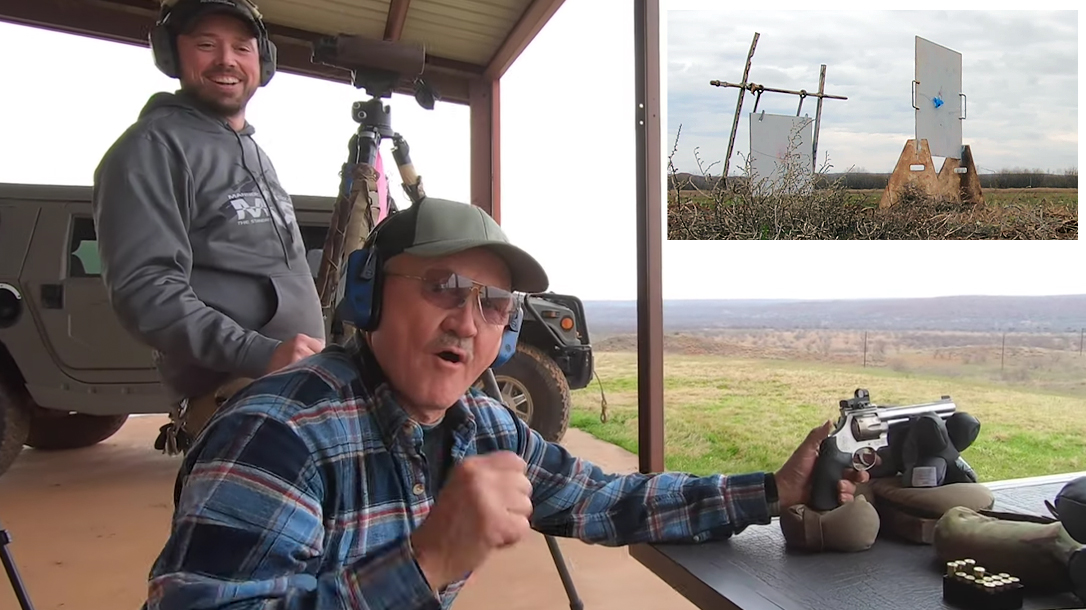 When it came to pistol shooting, especially revolvers, there were few who wielded a hand cannon with more speed and skill than McGivern. His shooting feats were nothing short of superhuman: The man clearly had eyesight and reflexes that were far keener than the average person’s. The fantastical shooting and quick-draw abilities of fictional pistoleers were present in the very real-life McGivern, though he didn’t exactly cut the typical figure of a gunslinger. At just 5-foot-6, he was a small, barrel-shaped man who was the fastest gun on the planet during the years between the two world wars.

McGivern bolstered his income performing as a trick shooter in the 1920s and ’30s, traveling all over the United States to put on astonishing displays for giddy crowds. He routinely shot at an assortment of stationary and airborne targets, like clay pigeons and lead disks the size of a quarter. You want to really understand how good McGivern was? Go to a safe shooting area, throw a tin can in the air, and see if you can draw and hit it before it lands on the ground. Unless you’re Jerry Miculek or Julie Golob, you probably didn’t even get close.

McGivern could hit the can six times before it hit the dirt, on the draw. He could also throw playing cards in the air and cut them in two, edgewise, with a bullet. He could hit two aerial targets with two revolvers at the same time. Like I said, he was superhuman.

He set a revolver world record while on tour in 1932 that remains unbroken to this day and got him into the Guinness Book of World Records, until Guinness removed all shooting records a few years ago. McGivern fired two consecutive, five-shot groups from a revolver at a distance of 15 feet that “could be covered by a half-dollar piece” in a blinding 0.45 seconds (as clocked by shot timer). The diameter of a half-dollar was a hair over 1.2 inches.

But this pistol prodigy went largely unnoticed for much of his life, working primarily as a sign painter in the small Montana town where he lived for 30 years.

Unfortunately, arthritis eventually put an end to McGivern’s trick shooting career in his late 50s, so he decided to travel around and spread his knowledge instead of entertaining folks.

He worked with law enforcement personnel all over the country. He taught marksmanship to police officers and federal agents from various LE agencies, including at the FBI’s training headquarters in Quantico, translating his exhibition-shooting experience into practical skills that focused on putting a lot of rounds on a target, accurately and quickly, under varying circumstances. At the time, most law enforcement in the US were still carrying double-action revolvers, McGivern’s specialty.

He started his trick shooting career using semi-auto handguns but realized he could shoot quite a bit faster with double-action revolvers. If there’s any doubt this is generally true, check out Miculek firing 12 shots from a revolver in under three seconds back in 1999.

When it came to training law enforcement, McGivern taught them how to shoot fast and accurately at close targets, but he was a firm believer that a .357 Magnum revolver, with proper technique, could be used to effectively engage man-sized targets with repeatable accuracy at distances of 600 yards. He preferred to use a gun outfitted with a small-diameter rear aperture sight with a gold bead front sight for this kind of shooting, though he experimented with various peep sights and telescopic scopes.

In fact, McGivern was friends with Elmer Keith and was instrumental in creating the earliest magnum revolver cartridges. While Keith was (most likely) integral to the creation of the .357 Magnum, he ultimately went on to deride it when he developed the .44 Special into what would become the .44 Remington Magnum, a superior cartridge in his mind. McGivern, on the other hand, believed the .357 Mag was the ultimate revolver cartridge and devoted a whole lot of his time and effort to pushing the round to its limits with what would have been considered a service revolver at the time, both in terms of speed and close- and long-range accuracy.

Time has proved that McGivern may have ultimately been correct in his assessment of the .357 Magnum. Despite Keith’s proselytizing, the .44 Mag was always considered too overpowered for law enforcement use, while many departments and agencies adopted .357 wheelguns as replacements for or as an alternate option to .38 Special revolvers.

Today, despite a foray into use of the more powerful .40 S&W for semi-autos, the 9 mm chambering, with modern ammunition, reigns supreme in the LE and military worlds—and the characteristics of a 9 mm +P cartridge are more similar to a .357 load than they are to a .44 Mag. Perhaps McGivern was more on the money because he focused on volume of fire and LE applications, whereas Keith was more hunting focused.

Here’s a quick list of some of McGivern’s most famous shots with a double-action revolver. Think you could pull off any of them?

Jerry Miculek is one of the most remarkable competition shooters of our day, and it’s a privilege to see him shoot in person, as I imagine it must have been to see McGivern put on one of his trick-shooting displays.

Miculek has broken several of McGivern’s long-standing records, but there’s one he can’t beat. When Miculek tried to top the record of 10 shots in 0.45 seconds, he couldn’t score a better time than 0.57 seconds. McGivern set that record back in 1932 when he was 57 years old — and if Miculek can’t beat it, I don’t know who can.