Art and military action each have been catalysts for transformational change, but usually at opposite ends of the human experience. This year, they will come together for “Veterans Reclaim Armistice Day: Healing Through the Humanities,” a free event sponsored by the Kurt Vonnegut Memorial Library on Nov. 11, 2012, at the Indiana War Memorial.

Funded by Lilly Endowment Inc. and supported by veterans groups throughout Indiana, “Veterans Reclaim Armistice Day” combines lectures, performances, sculpture, readings, painting and interactivity in an exploration of how artistic expression can help veterans and military personnel communicate their experiences to others.

The event, taking place on the final day of the citywide Spirit and Place Festival, is a natural fit for the Vonnegut Library, says its executive director, Julia Whitehead.

“Kurt Vonnegut was huddled captive in a former meat locker when the bombs fell that leveled Dresden, Germany, in World War II. He was forced to pull out dead men and women and children and pets, and he was a 22-year-old kid. It’s why he wrote Slaughterhouse-Five,” Whitehead says.

Dr. Jonathan Shay, who holds a B.A. from Harvard and an M.D. and a Ph.D. from the University of Pennsylvania. After joining the U.S. Department of Veterans’ Affairs outpatient clinic in Boston, he says his work there “utterly redirected his life.” He shifted from neuropathology to the study of post-traumatic stress disorder.

Mark Vonnegut – yes, Kurt Vonnegut’s son – who has written “vividly and personally,” NPR Books said, about surviving bipolar disorder and “returning to a reality that’s been snapped” in the memoir Just like Someone Without Mental Illness, Only More So. His first, The Eden Express, A Memoir of Schizophrenia, has been called an “artistic account of spiraling into psychosis and the social tumult of the 1960s.” This pediatrician and fascinating speaker earned degrees at Swarthmore and Harvard.

Steve Inskeep, co-host of NPR’s (National Public Radio) Morning Edition, the most widely heard radio news program in the country. He is known for his probing questions to the famous and powerful and for his passion for the stories of the less famous, including soldiers. He covered the war in Afghanistan, the hunt for Al Qaeda suspects in Pakistan and the war in Iraq. He is the author of Instant City: Life and Death in Karachi. Inskeep grew up in Carmel, Ind., and graduated from Morehead State University in Kentucky.

Renee Klish, former Army art curator and former director/curator of the Chaplain Museum for the U.S. Army. She holds a bachelor’s degree in journalism from the University of Missouri-Columbia. Among other works, she has written Documenting Military History Through Artists’ Eyes and in Their Own Words.

Ehren Tool, a Marine veteran of Desert Shield and Desert Storm. He began studying drawing at the University of California, Berkeley, when he left the Corps in 1994. Now a ceramicist, he throws cups from clay and them imprints them with military scenes that range from insignia to shockingly violent. “If some of these scenes were on a 6’x6’ painting,” he says, “they’d be too much.” As he has at other artist-in-residence appearances, he will give the cups away as he creates them while in Indianapolis as a way to provoke conversations about war.

Christiane C. O’Hara, Ph.D., of the ArtReach Foundation, who has watched her oldest son deploy to Afghanistan and Iraq with the U.S. Army. She says expressive art is an enormously effective means of helping people cope with trauma because it allows them to express anger, loss, pain and resentment – to work through emotions and discover hope. She is a Red Cross consulting psychologist to the Eisenhower Army Medical Center in Fort Gordon, Ga., serves on the Georgia Paving the Way Home for Veterans steering committee and is a USO Georgia volunteer. She earned her degrees at the University of Georgia, the Atlanta Veterans Administration Medical Center and the Emory University Center for Rehabilitation.

Tom Hubbard, painter, photographer, ceramicist, from Semper Fidelis: How I Met My Father. Hubbard’s dad was killed in Vietnam when the artist was just 2; what followed, he says was 30 years of not talking about it, thinking about it or, most importantly, feeling it. This exhibit represents his journey to come to know his father.

Jason Poudrier, an educator, poet and Oregon native now living in Oklahoma. In 2003 he was deployed to Iraq, wounded in action, and awarded the Purple Heart. After an honorable discharge in 2005, he completed a BA in English with an emphasis in creative writing and went on to complete his MEd in education. Poudrier’s poems have appeared in New Mexico Poetry Review, the Connecticut Review and Sugar Mule. His recently published book of poems is entitled Red Fields – Poems from Iraq.

The agenda for the day:

A Message from Andy Jacobs 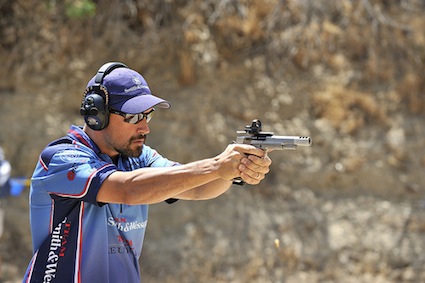 Art and military action each have been catalysts for transformational change, but usually at…