The story of the Horse Soldiers—the legendary group of Green Berets from the 5th Special Forces Group’s Operational Detachment Alpha 595, aircrew members from the 160th Special Operations Aviation Regiment and Air Force Combat Controllers who were the first American troops on the ground in Afghanistan as part of Operation Enduring Freedom in the weeks following the 9/11 terrorist attacks—is finally coming to the big screen in a new film called “12 Strong.” Check out the trailer above.

The team, known as Task Force Dagger, was given the mission to link up with the Afghan Northern Alliance and assist in coordinating the effort to take down the Taliban. Upon arrival, they soon learned that the easiest way of navigating the mountainous terrain of Northern Afghanistan was by horseback. Faced with no other options for transportation, the members of Task Force Dagger mounted up on horses provided by local Afghan tribes. They would be known from then on as the Horse Soldiers.

Directed by Nicolai Fuglsig, “12 Strong” is based on the book “Horse Soldiers” by Doug Stanton and stars Chris Hemsworth, Michael Shannon, Michael Peña, Rob Riggle and others. See the official synopsis below.

12 Strong is set in the harrowing days following 9/11 when a U.S. Special Forces team, led by their new Captain, Mitch Nelson (Chris Hemsworth), is chosen to be the first U.S. troops sent into Afghanistan for an extremely dangerous mission. There, in the rugged mountains, they must convince Northern Alliance General Dostum (Nvid Negahban) to join forces with them to fight their common adversary: the Taliban and their Al Qaeda allies. In addition to overcoming mutual distrust and a vast cultural divide, the Americans—accustomed to state-of-the-art warfare—must adopt the rudimentary tactics of the Afghani horse soldiers. But despite their uneasy bond, the new allies face overwhelming odds: outnumbered and outgunned by a ruthless enemy that does not take prisoners. 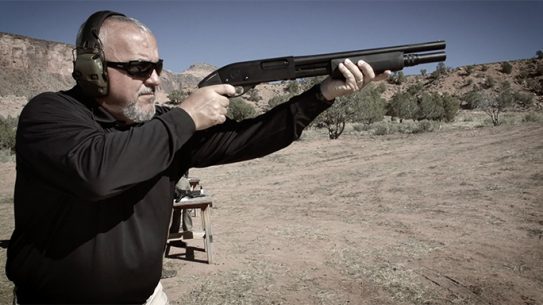 The 'pistol grip firearm' market continues to grow and the Nighthawk Tomahawk is chock...