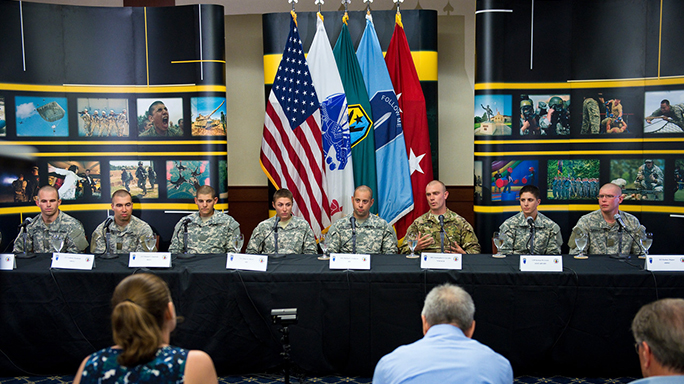 The following is a release from Army News Service:

For the first two women who earned the Ranger tab, attending the Ranger School was all about honing leadership skills and being better leaders for the Army.

“I knew how badly I wanted to go [to Ranger School] when I was a second lieutenant, before I became a platoon leader,” Griest said, during an Aug. 20 press conference. “I was hoping to go to this course because it is the best training the Army can provide, and I wanted to have that training before I had a platoon.”

Haver, an AH-64 Apache pilot, said she wanted to go to Ranger School because she knew it would make her a better leader for her Soldiers.

“The reasons I chose to come were the same as the men here: to get the experience of the elite leadership school … and to give me the opportunity to lead my Soldiers the best that I can,” said Haver. “I think if females continue to come to this course, they can be encouraged by what we have accomplished, but hopefully they’re encouraged by the legacy that the Ranger community has left.”

Maj. Gen. Austin S. Miller, commander of the U.S. Army Maneuver Center of Excellence, said during a news conference that the two women accomplished every trial and test, both physically and mentally, that was exacted upon the 94 men who also finished.

“Up front, what we’ve been very consistent on is we’ve said there will be no change to the standards … and there weren’t,” he said. “We also said … we’re going to be professional and objective as we work our way through this process, which is exactly what you would expect from a Ranger-qualified instructor or anybody else in the Army.”

While Grist and Haver are the first two women to graduate Ranger School, they said it was evident from their male classmates that their performance in the school — and as teammates — was more important than their gender.

Haver said that during the course, it might have been a natural assumption that the female students would have wanted to band together for support, but that was not the case. Instead, she said, support came from those Soldiers closest to them — as it would be in combat.

“We immediately integrated in our squad and became teammates that way,” Haver said. “It was never about the women trying to beat the men through Ranger School, or the women banding together for any reason in Ranger School. When you are sucking, it’s the person immediately next to you [that you rely on.] And how we were dispersed throughout the companies didn’t afford for a woman to be there. And quite frankly, I didn’t think we needed that support. We needed support from our Ranger buddies next to us. We intentionally tried to rely on our squad mates, because they are the closest to us, and not the females around us.”

Fellow Ranger School graduates said they were impressed with Griest and Haver’s abilities, and that it didn’t make a difference that they were women.

2nd Lt. Erickson D. Krogh, an infantry officer, said “at the end of the day, everyone was a Ranger and it was the same throughout as long as the team pulled through and accomplished the mission.”

“When we were given resupply and you’re given 2,000 rounds of machine-gun ammo, the last thing you’re caring about is whether your Ranger buddy is a man or a women — because you’re not carrying all 2,000 rounds by yourself,” added 2nd Lt. Michael V. Janowski, also an infantry officer.

Spc. Christopher J. Carvalho, who serves as a medic, also earned his Ranger tab. He said that he saw that the two women had finished some tasks ahead of the men.

“I know my first experience with the women in Ranger School was during RAP week. One event in particular was the 12-mile ruck march in which we had about 50 pounds-plus whatever weight we carried in water on our backs,” Carvalho said. “These two women finished well ahead of some of the males and well ahead of 60 other men who didn’t complete their ruck march. So right then and there, that’s what validated it for me … these women are for real, they’re here to stay, and they’re doing the same stuff we are. That really solidified it for me.”

For the future, Griest said she wants to consider further roles in combat arms that might one day open to women. Already she said she is looking into civil affairs, a part of the special operations community. She said she is open to doing more.

“I am interested to see what new doors open to women,” Griest said. “I think Special Forces is something I would definitely be interested in, if my timeline permits for that. Currently I am trying to pursue civil affairs, which is under the special operations umbrella, and which is open to women. But there are also several other options out there. I am honestly not very decided about it. It is something I am looking at pursuing if more opportunities open to women.”

Haver said she wants to stay in aviation, to be the best she can be, and to go as far as she can.

“I think in the past decade … females have served in those combat roles. I myself am attack aviation, which I plan to continue to serve in, in my role as an aviator. I can’t speak to what other females will decide to do if those doors are opened. But I can say I plan to stay with aviation as far as that will let me go, and hope to serve as far as leadership will let me in my positon.”

Griest says for other women that want to attend Ranger School — and she knows a few — perseverance and confidence is the key to making it through.

“I personally know a lot of women interested in going, and for whatever reason, whether it is timing or deployment or they are in some school at this point in time, they weren’t able to go to this assessment. But I know many very qualified women that I can think of that could pass the course or at least make a very good attempt. I would encourage them to go. And I would say keep doing what they are doing. They are motivated. It is definitely more of a mental challenge than physical. If you mentally know you want to get through — and you have to want to get through — than you will make it.”

The Army plans to run another Ranger School assessment in November which will also be open to women. 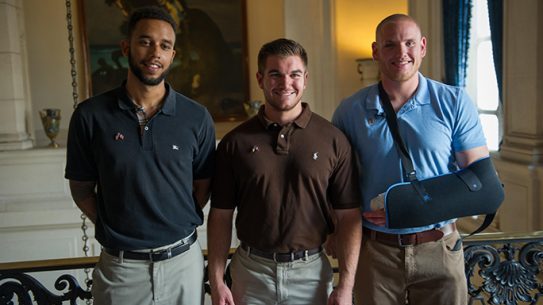 Airman 1st Class Spencer Stone put his own life on the line when a...