Without firearms, but armed with loudspeakers, posters and “Don’t Tread On Me” flags, about 2,000 gun-rights advocates assembled near the Washington Monument yesterday to warn the government to stop infringing on their right to keep and bear arms.

“I think it’s good to let the government know the Second Amendment is important,“ said Bruce T. Jackson of Stafford County, one of more than 100 Virginians who boarded three buses to the nation’s capital chartered by the Virginia Citizens Defense League.

The Second Amendment March was scheduled yesterday to commemorate the first shots fired in the Revolutionary War at Lexington and Concord on April 19, 1775.

But it also fell on the 15th anniversary of the bombing of the federal building in Oklahoma City by Timothy McVeigh. Several hundred yards from the rally, American flags ringing the Washington Monument flew at half staff to mark the Oklahoma tragedy.

Against a backdrop of a large American flag onstage and less than a mile from the White House, speakers fired up the crowd, telling them their rights were under attack, and urging them to seek justice through the ballot box.

“We’re in a war,“ said Larry Pratt, head of the group Gun Owners of America, which helped sponsor the event.

Earlier, across the Potomac in Arlington County, a much smaller group of activists, some carrying loaded handguns, and others carrying rifles that were unloaded in accord with Virginia law, staged a “walk to the line” at Gravelly Point Park. They protested the ban on carrying firearms or ammunition in the District of Columbia.

Many of those participating in the Washington rally wore their empty holsters as a form of protest.
“I feel under-dressed,“ said Terrell Prude Jr., who typically carries a .357 Magnum, but yesterday toted a pastel-colored sign that read “San Francisco Liberal with a Gun.“

A number of attendees dressed in Colonial militia uniforms, while Richmond-area actors Kevin Grantz and Gerry Notare, were paid to appear as George Washington and Patrick Henry, respectively.

The actors, neither of whom carry guns, addressed the crowd, with Notare delivering Henry’s famous “Give me liberty, or Give me Death” speech to cheers.

Michael Alcock drove five hours from Connecticut and was disappointed with the turnout. “It should have been five times this size,“ said the 65-year-old draftsman, who is also a Colonial re-enactor. Yesterday, he wore a “Don’t tread on Me” T-shirt, and said it is important to demonstrate that reasonable people support the gun-rights cause. “These aren’t a bunch of nuts here,“ Alcock said. “These are normal, regular people who for one reason or another like the shooting sports or like the comfort associated with having a sidearm with them or a gun in the home where they can protect themselves.“ 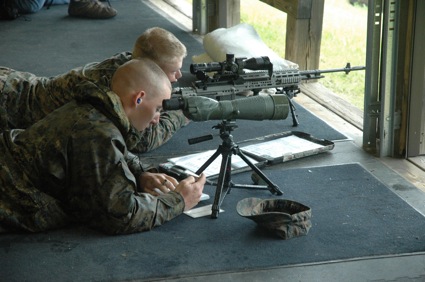 Without firearms, but armed with loudspeakers, posters and “Don’t Tread On Me” flags, about…