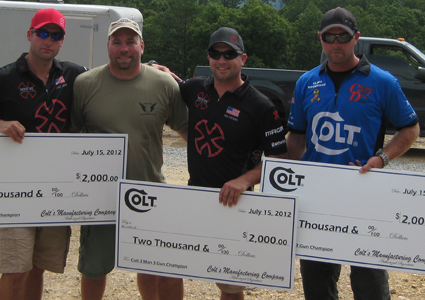 This is the first year the 3-Man 3-Gun Championship was run in a two-match format. The final match consisted of seven stages, including three rolling thunder stages and four relay stages. The winning team was determined by the highest combined score at the end of both events. Upchurch, Jones and Romero had captured the lead after the first round of competition in May, and went on to secure victory at the final stage of competition on July 14 and 15.

“The 2012 Colt 3-Man 3-Gun Championship was an exciting and challenging competition,” said Upchurch. “It was a thrill to shoot alongside Jansen and Rob on the various stages, and I am excited to see the continued growth and popularity of 3-gun shooting.”

The 2012 Colt 3-Man 3-Gun Championship featured teams of three competing against each other in 3-gun shooting competitions over two rounds. More than 55 teams from across the United States and Canada participated. The first event was held on May 20 at the Topton Fish & Game Association in Topton, Penn., and the final stage of competition took place on July 14 and 15 at the Colt-sponsored Peacemaker National Training Center in Gerrardstown, West Virginia.

“It was an honor to support an event that highlights top shooters and brings exposure to the 3-gun sport,” said Joyce Rubino, Vice President of Marketing for Colt’s Manufacturing. “We are looking forward to sponsoring more events this season and watching Clint’s continuing success.

The winners received a $6,000 cash prize, split equally amongst them, courtesy of Colt’s Manufacturing.