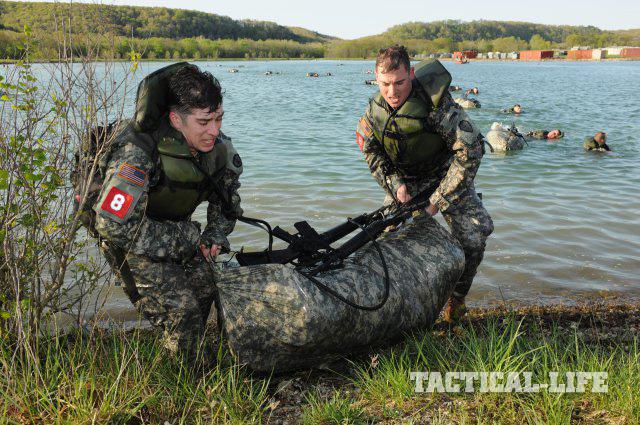 Sgt. Clint Currier and Capt. Gregory Shepard drag their poncho raft out of Training Area 250 lake after swimming across it during the 2015 Best Sapper Competition.
(Photo by Melissa Buckley (Leonard Wood))
Comment(s)

The following is a release from Mrs. Melissa Buckley of Fort Leonard Wood:

“We didn’t expect to win, because we had a very short notice that we were going to be teammates,” said Sgt. Brandon Loeder, who participated in the competition with 1st Lt. Daniel Foky. The Soldiers are assigned to Company B, 127th Airborne Engineer Battalion, 1st Brigade Combat Team, 82nd Airborne Division.

Foky’s original teammate was not able to compete.

“A week before the competition Sgt. Loeder stepped up to the plate,” Foky said. “We just came to compete and see how well we could do. We are definitely surprised and pleased with the outcome.”

Foky sought out Loeder as his partner weeks before. However, Loeder just finished Fort Leonard Wood’s 28-day Sapper Leader Course at the end of March, and was unsure if his body would be recovered in time to compete.

“As an instructor organizing one of the very first competitions, a competitor in 2007 and a team sponsor in 2012 – I wanted to improve on those experiences,” Wiseman said.

“The competitors did not know what was coming up next, and they were constantly on the go. This was a non-stop competition,” he said.

Under the cover of darkness, 92 Soldiers started with a non-standard physical fitness test.

Sappers immediately continued on to the nine-timed tasks that made up the round-robin phase, beginning with a poncho raft swim. The rest of the day was spent navigating from one event to the next on foot, covering more than 12 miles.

From expedient climbing to the Claymore mine challenge, the tasks were designed to push Sappers past their mental and physical breaking points – filtering the smartest and strongest Sappers to the next level of competition.

Following the round robin of events, the Sappers were narrowed down to the top 33 scoring teams.

Through the first evening, the Sapper teams participated in land navigation, those scores cutting the teams to 20 for day two – Sapper Stakes.

The seven events of Sapper Stakes tested the competitors on their basic Soldier and combat engineer specific skills with tasks including a stress shoot, Jumar ascender climb and hands-on demolition exam.

“There was a zip line across the river. It was so [much] fun,” Loeder said. “We got to run and jump off a cliff. It was cool.”

Day two’s 20-mile ruck march was the hardest event, according to the winning team.

“We knew it was going to hurt, but we didn’t expect it to hurt as bad as it did,” Foky said. “The last four miles were horrible. Sgt. Loeder really carried us through the road march. He motivated me to finish.”

“We were already fatigued. So, walking 20 miles with a 60-pound ruck sack was rough,” Foky said.

Wiseman said the course was so tough that six teams dropped from the competition, meaning only three teams had to be cut to make the top 10 teams that were to compete during the last event.

With little to no sleep on the third and final morning of competition, the Sappers mustered their last bit of motivation to tackle the x-mile run, which included 10 physically demanding challenges spread across an undisclosed number of miles.

Looking weary, but ready, the final 20 competitors donned their chemical masks and charged across the x-mile run’s start line.

Teams were then met with challenges including the Skedko rescue litter drag, two separate fitness circuits and ultimately through the traditional Sapper door breach.

“The hard part wasn’t the running, it was all of the events they had interspersed. It was an 82-minute smoke session for us,” Foky said.

Overall, Foky said he was impressed with the execution of the competition.

“It was very well put together and the support from Fort Leonard Wood was huge. It made it more fun for us,” Foky said.

“Honestly, it was really awesome to be around all of the teams. Everyone who was there wanted to be there and deserved to be there. Being able to compete against some really skilled, proficient and experienced Soldiers was motivating,” Foky said.

“Rarely do we get to be around a group of people who are that hard charging. Just being able to compete with them was an honor,” he said. 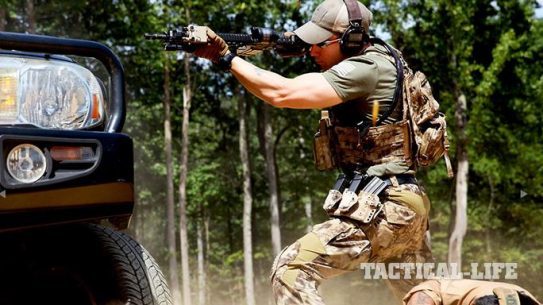 Former Marine Travis Haley, one of Bravo Company's elite gunfighters, has 15 years of...