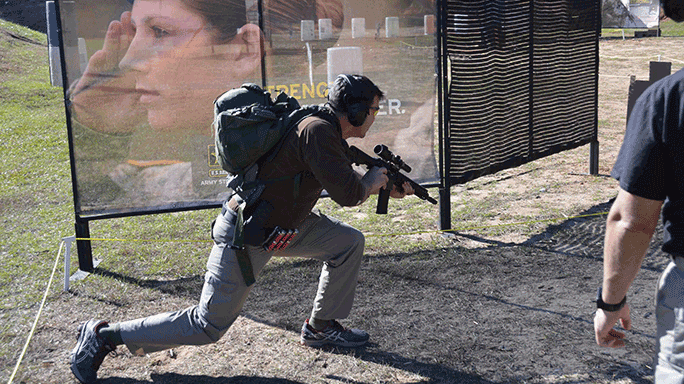 The following is a release from Brenda Rolin, USAMU Public Affairs:

The event was hosted by the Fort Benning Directorate of Family and Morale, Welfare and Recreation facilitated by the U.S. Army Marksmanship Unit, or USAMU.

During the competition, participants and spectators experienced 10 multi-gun stages designed to mimic portions of Army training, including airborne, sniper, air assault, master breacher, and survival, evasion, resistance and escape. All of the stages were built and overseen by USAMU Soldiers.

“We wanted to give people a chance to see some of the ways the Army trains and combines it with a marksman event that also showcases our action shooting team,” said Sgt. 1st Class Daniel Horner, U.S. Army Marksmanship Unit Action Shooting Team member, whose team built the stages throughout 12 days.

In action shooting, competitors move, negotiate obstacles, run, speed-reload and drive their guns through each of several courses as fast as their skill allows. Both speed and accuracy are equally important. A fast run with poor hits or misses is likely to cost the match, just as perfect shots and a slow time will probably not win. The key to success is a balance of speed and accuracy.

Sam and Aimee Horstman brought their two children, Lilly, 8, and Andrew, 6, to the challenge. Sam used to be assigned to 2nd Battalion, 69th Armor Regiment, 3rd Brigade, 3rd Infantry Division and was participating in the multi-gun event.

While dad competed, Aimee, Lilly and Andrew explored a Bradley A3, among other displays.

“This is a chance for [Lilly and Andrew] to see what their dad used to do,” Aimee said.

The Bradley was part of a stage where the competitors ran from the back of the vehicle and then engaged targets, including flying clays, with a shotgun.

Other stages included firing at targets while wearing gas masks, carrying rucksacks filled with gear, crawling beneath barbed wire, climbing over walls, escaping from the enemy, clearing a building and many other uniquely military activities.

Since multi-gun involves firing at targets with three types of weapons – rifles, shotguns and pistols – competitors had to practice both safety and accurate marksmanship skills.

All of these variables were included in a multi-gun challenge that tested the participants’ abilities to engage targets under unfamiliar and often challenging conditions, Horner said.

“Next year, I hope the walls are shorter and the barbed wire is higher,” said Jerry Miculek, professional multi-gun marksman, who competed in the senior and unlimited categories.

Another obstacle was more difficult for firefighter Greg Pruitt, who has been a marksman for about 35 years and attended with his friends and fellow sports shooters. He said the gas mask was a challenge for him.

“Being a firefighter, I wear a mask almost daily, but shooting with the mask was a problem, because normally I’m shooting water not bullets,” Pruitt said. “I think anyone who attended this would have their eyes opened as to what [Soldiers] have to do. I hope this continues; it’s definitely a great event.”

The last Fort Benning Challenge was in 2010. Based on this year’s success, plans are underway for the next challenge scheduled for Dec. 1-4, 2016.

Competitive multi-gun marksman Mike Cassidy also enjoyed the challenge and is glad it is returning next year.

“The last Fort Benning Multi-gun Challenge [in 2010] was the first competitive multi-gun match I ever shot,” he said. “The Army Marksmanship Unit’s stages are phenomenal, because they really know how to design them. Next year, I hope they get more ranges and facilities to be even more creative.”

“We intend to come up with a theme for next year’s event that can only be accomplished on a military installation and add to the overall ambiance of the match to ensure a one of a kind experience for all competitors and spectators.”

“We have received a lot of positive comments from the competitors and look forward to improving the event for next year,” said James Shoemaker, chief off Community Recreation Division.

Members of the USAMU Action Shooting Team compete in matches conducted by the U.S. Practical Shooting Association, International Defensive Pistol Association and 3-Gun Nation, among others. 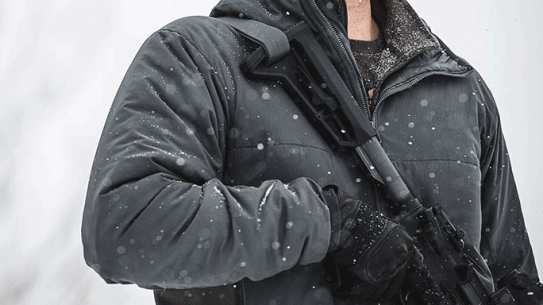 The brand new SL-K from Magpul is designed as a drop-in replacement buttstock for...