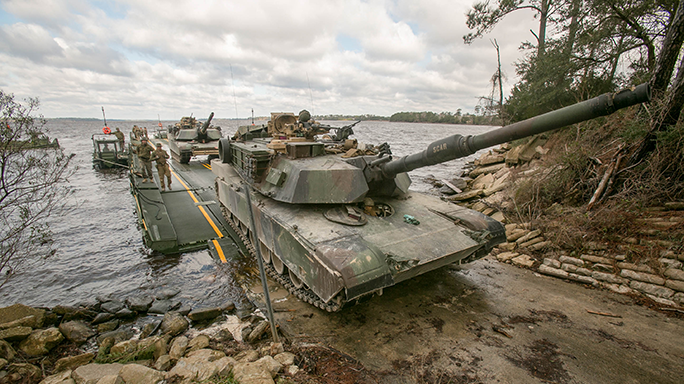 Marines with Bridge Company, 8th Engineer Support Battalion, roll an M1A1 Abrams tank off of a seven-bay raft system after being transported across New River during a water-crossing operation at Marine Corps Base Camp Lejeune, N.C., Feb. 4, 2016. The company specializes in allowing units to travel over bodies of water, which in turn increases the mobility of the unit being transported.
(Photo by Lance Cpl. Damarko Bones)
Comment(s)

Through strong winds and choppy waters, Marines with Bridge Company, 8th Engineer Support Battalion, prepared for Operation Iron Blitz by providing support to 2nd Tank Battalion by operating rafts, which allowed the tanks to cross a body of water at Marine Corps Base Camp Lejeune, Feb. 4, 2016.

Bridge Company operated two seven-bay raft systems which would each carry two tanks at the same time across New River. The operation allowed 2nd Tanks to cross the river in less than 15 minutes.

“This operation definitely increases the mobility [of a unit],” said 1st Lt. Walter Williams, a platoon commander with Bridge Company. “You will save your tanks from having to cross a civilian bridge and you can literally cross any body of water as long as the shore conditions are correct.”

Transporting tactical vehicles over open bodies of water is typically the preferred method of travel when the opportunity is afforded.

“We’re pretty much the water taxi for the [Marine Logistics Group],” said Cpl. Adam Gilliam, a raft commander with Bridge Company. “We support the MLG [with every amphibious crossing].”

The company is proficient in a wide variety of water-crossing operations and is capable of using different types of rafts.

“We can do concurrent bridging and conventional and longitudinal rafting,” Gilliam said. “We can also carry up to any two tactical vehicles from [Humvees] to tracked tanks.”

While working in a garrison environment, the company trains so they can take their capabilities overseas to a combat zone if called upon.

“Being in combat wouldn’t make a difference to us,” Gilliam said. “We wear all of our protective personal equipment and as long as we have security posted we could get it done.”

Bridge Company is an important benefit to II Marine Expeditionary Force and they are called upon to complete any water-crossing operations that any unit in the MEF may need.

“We, as Bridge Company, contribute a huge factor to the MEF,” Gilliam said. “Anything from tanks to [humvees] gets rafted by us and I would say we are a huge lifeline to the MLG.” 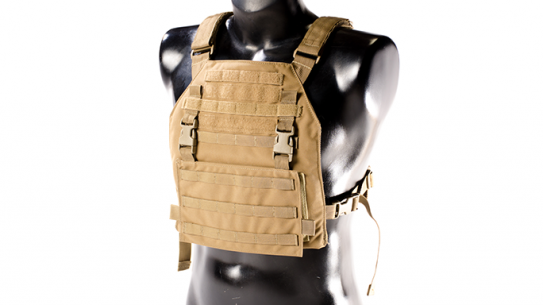