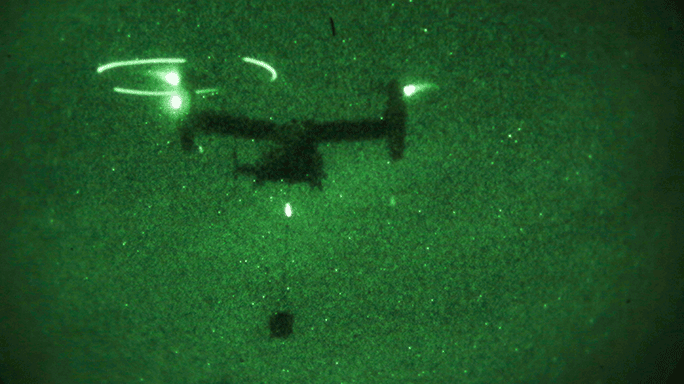 An MV-22B Osprey, operated by a crew with Marine Medium Tiltrotor Training Squadron 204, carries cargo during a night time external lifts operation at Marine Corps Base Camp Lejeune, N.C., Dec. 14, 2015. Marines with 2nd Transportation Support Battalion supported the exercise to facilitate the required flight hours for student pilots, and practice their own skills as a helicopter support team securing transportation of resources for Marines that would need it in a real-world operation.
(Photo by Cpl. Paul S. Martinez)
Comment(s)

The following is a release from Cpl. Paul Martinez, II Marine Expeditionary Force:

“Transportation of resources is the primary focus for the Marines here in 2nd TSB,” said Sgt. Brian Seate, the range safety officer for the operation. “The Marines do not have a set number requirement for their lifts, but the more we do, the more it makes them knowledgeable and confident in this military occupational specialty.”

Marines on the ground guided the landing of the aircraft through chemical trail lights that designated a field landing zone, with their netted load in the center. Working with zero illumination, the Marines then attached the cargo load, weighing approximately 1,236 pounds, to the cable hanging from the aircraft.

“During day-time, if a Marine knows what he’s doing, he’s good, but at night, you need an extra sense of awareness,” said Lance Cpl. Ian Bolz, a landing support specialist. “Our safety Marine needs to be watching, and making sure the movements and positions of the crew are okay.”

In an operational environment, landing support specialists can be expected to help facilitate the transport of supplies, ammunition, or even heavy weapons.

“We could help get meals, ready-to-eat pallets, ammunition or all the way up to an M777 Howitzer lifted to get them to the Marines that are on the front lines,” Seate said.

Seate regarded the training as mutually rewarding to the squadron and his battalion, citing that each successful operation strengthens their proficiency as landing support specialists.

“We, as well as the squadron, both benefit from this training and fulfill what is a very important military occupational specialty in the Marine Corps,” Seate said. 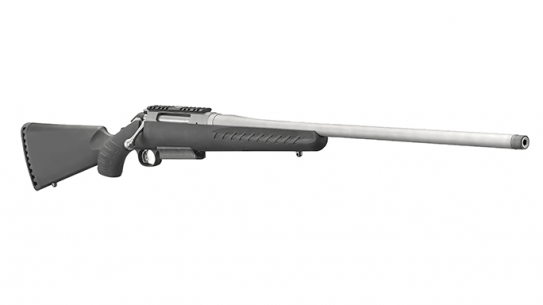