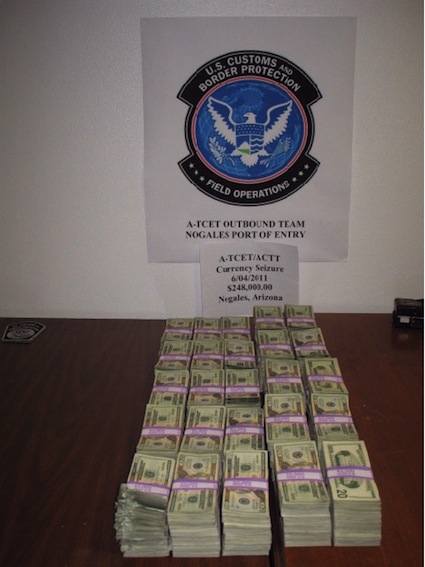 $248,000 in undeclared currency seized at the Nogales Port … Photo courtesy of US Customs and Border Protection.

U.S. Customs and Border Protection officers assigned to Arizona’s ports made several significant drug and currency seizures over the weekend. The narcotics have a combined weight of more than 1,677 pounds with an estimated value of more than $5.7 million. Along with the seizure of more than $390,000 in undeclared outbound currency, narcotics seizures included more than 1,300 pounds of marijuana, 86 pounds of cocaine, and 278 pounds of methamphetamine.

“The concerted efforts of our officers at the Arizona ports to protect our country are demonstrated day-after-day through their significant seizures of illicit proceeds and narcotics,” said Tucson Field Office Acting Director James Tong. “Their tireless work prevents illegal contraband from reaching our communities and cuts-off the illicit currency flow used to fuel the drug war in Mexico.”

On June 3, CBP officers assigned to the Nogales Rail Team conducted a non-intrusive inspection on a train entering the United States through the Nogales Port and discovered an anomaly within an auto carrier rail car. Subsequent inspection utilizing a narcotics detection canine at the Rio Rico rail yard yielded 20 bales of marijuana weighing more that 564 pounds with an estimated value of more than $282,000. The narcotics were seized and transported to the Mariposa Commercial Port for processing.

On June 3, a 59-year-old U.S. citizen female and her 18-year-old U.S. citizen son attempted to enter the United States through the Morley Pedestrian Gate in Nogales, and were referred for secondary inspections. Further inspection revealed they were both carrying packages of methamphetamines concealed on their bodies weighing a combined total of nearly three pounds with an estimated value of nearly $42,000. Both subjects were taken into custody and turned over to Immigration and Customs Enforcement’s (ICE) Homeland Security Investigations (HSI) for further investigation.

On June 4, a 41-year-old Mexican female from Cananea, Sonora, Mexico, attempted to enter the United States through a Douglas Port vehicle lane and was referred for a secondary inspection. Subsequently, a narcotics detection canine alerted to the vehicle. During further inspection, 14 bundles of marijuana were discovered concealed in the vehicle. The narcotics weighed more than 57 pounds with an estimated value of nearly $30,000. The subject was taken into custody and turned over to ICE HSI for further investigation.

$248,000 in undeclared currency seized at the Nogales Port ... Photo courtesy of US…