Federal officials told Arizona’s attorney general and a congresswoman Monday that 524 of the 1,200 National Guard troops headed to the U.S.-Mexico border will be deployed in the state by August or September.

Giffords spokesman C.J. Karamargin said the 524 troops are being trained for deployment in August, and Goddard said two drone aircraft also will be used in Arizona. Goddard called the commitment a first step.

Another 224 troops will head to California, 72 to New Mexico and 250 to Texas. A national liaison office will draw another 130.

The Arizona troops will be assigned to entry identification teams and deployed between ports of entry to help the Border Patrol spot illegal border crossers.

Brennan, Goddard said, has the job of evaluating “the whole picture. He never said this is all. He said this is what we’re going to do right now.”

The federal officials, sent by President Barack Obama, were to meet later Monday with Gov. Jan Brewer in her Phoenix office. The ,eeting resulted from Brewer’s June 3 visit to the White House, where she and Obama discussed border security and immigration. Brewer asked for specifics on how the plans apply to Arizona.

The president previously announced plans to send 1,200 troops to the border, and he asked Congress for $600 million to pay for 1,000 more Border Patrol agents, 160 new federal immigration officers and two unmanned aircraft.

Brewer said after the June 3 meeting that Obama had assured her that the majority of the 1,200 troops would go to Arizona, the state with the most illegal border-crossings.

Brewer had sought the soldiers to help stem the flow of illegal immigrants and drug smugglers across the border, and she reacted to Obama’s initial announcement by saying 1,200 Guard personnel wouldn’t be enough. She also urged Obama to send National Guard helicopters and surveillance drones to the border.

“We’ve never had the attention, and we’ve never had the response or resources along the border that we have had recently,” Estrada said after the Tucson meeting. “And once we have the right match, the right combination, I think we’ll be able to claim some victories. It’s not going to stop, the border will never be sealed. It will be safer, maybe more secure, but it will always be active.” 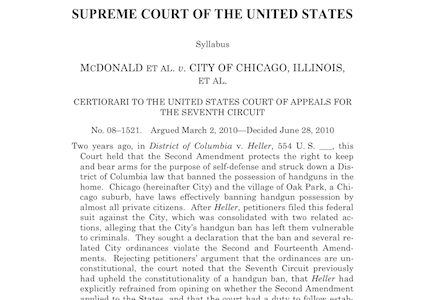 Supreme Court’s official ruling on McDonald v. City of Chicago as a PDF.