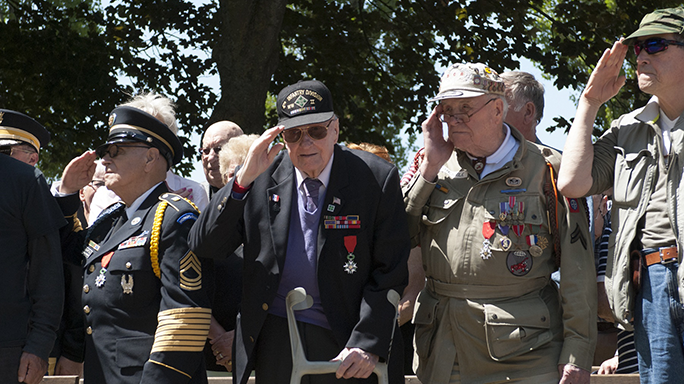 U.S. Army veterans Cpl. George Shenkle, center right, of the 508th Parachute Infantry Regiment, 82nd Airborne Division, and Sgt. Isaac Phillips, center left, of the 4th Infantry Division, salute the flag during the playing of the U.S. national anthem while at a ceremony at the Rex Combs Memorial in the Normandy region, June 4, 2015.
(Photo by Staff Sgt. Opal Vaughn)
Comment(s)

The following is a release from Staff Sgt. Opal Vaughn and the U.S. Army:

CHEF DU PONT, France (June 8, 2015) — It has been nicknamed the “longest day” and has had more movies played on the silver screen than most. But no matter how many times the stories are told, they never get old and will never be forgotten.

This year marked the 71st Anniversary of the D-Day landings, and in remembrance of that day, U.S. Army paratroopers from the 173rd Airborne Brigade, 101st Airborne Division (Air Assault), 75th Ranger Regiment, veterans, local French nationals, family and friends participated in a ceremony, at the Rex Combs memorial site in the Normandy region, as part of the weeklong celebration here, June 4.

“To see what my grandfather went through and the terrain he and many others had to fight on. It’s all so humbling,” said U.S. Army Ranger Capt. Drew Schaub, assigned to 75th Regimental Special Troops Battalion. “My grandfather, John Hamilton, was a sergeant in the 29th Infantry Division. It’s important to remember the heroism and sacrifice of that generation and the local people that also put their lives on the line.”

Most of them were young boys when they entered service but left as men. Their story of heroism and sacrifice, success and tragedy has echoed throughout history but will soon fade from living memory.

At 91 years of age, veterans Sgt. 1st Class Richard Yates and Cpl. George Shenkle, of the 508th Parachute Infantry Regiment, 82nd Airborne Division, and Sgt. Isaac Phillips, of the 4th Infantry Division, all count themselves blessed. They are among some of the last survivors of the World War II’s fighting generation.

“I’m just honored to be here,” Yates said. “It was hard times back then but if I had to do it all over again I would.”

Celebrating the anniversary of D-Day also allows new generations of paratroopers to continue the legacy. It is also an opportunity to share in the tradition of friendship.

“It’s important to jump where airborne jumping began,” said U.S. Army paratrooper Spc. Drissa Camara, assigned to 173rd Airborne Brigade Support Battalion. “It’s an honor for us to be part of these celebrations and to keep the friendship alive between the U.S. and France. I lived in France before and I never knew the history of what happened here.”

More than 380 Service members, from Europe and affiliated D-Day historical units, participated in the 71st anniversary as part of Joint Task Force D-Day 71. The task force, based in Sainte Mere Eglise, France, supported local events throughout Normandy, June 2-8, commemorating the selfless actions by all the Allies on D-Day, which continue to resonate 71 years later. 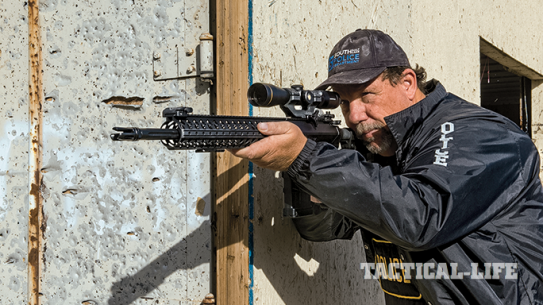