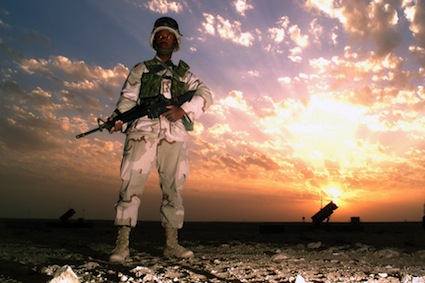 Almost 100 U.S. Army personnel will deploy to this Pacific island territory in coming weeks as the Pentagon moves one of its missile defense systems designed to knock down hostile targets in the upper atmosphere.

The move comes as North Korea in the past several weeks has threatened to fire nuclear missiles at the United States and claimed it had scrapped the 1953 armistice that ended fighting in the Korean War. But the Army won’t divulge exactly when the ground-based Terminal High Altitude Area Defense system and its 95-person crew based in Fort Bliss, Texas, will arrive here because of security reasons, said Lt. Col. Margaret Kageleiry, an Army public information officer.

“We don’t know the duration of the deployment, but what we do know is that they are ready,” Army Maj. Gen. Dana J.H. Pittard, commander at Fort Bliss, said during a Texas press conference. “They are trained, they are ready, and they will do the mission.”

US to deploy new laser weapon to Persian Gulf

Almost 100 U.S. Army personnel will deploy to this Pacific island territory in coming…