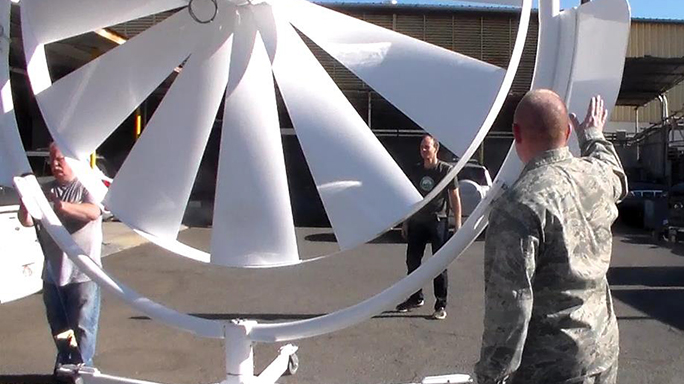 Natural Power Concepts personnel and Lt. Col. Scott Fitzner, of the AFRL Materials and Manufacturing Directorate, inspect the spoke wheel medium wind power system, one of a number of energy-harvesting technologies being installed as part of the five-year, $20 million cooperative agreement with AFRL that will establish a microgrid demonstration project at Joint Base Pearl Harbor-Hickam in Hawaii.
(Photo by Hawaii Center for Advanced Transportation Technologies)
Comment(s)

The following is a release by Holly Jordan, Air Force Research Laboratory Materials and Manufacturing Directorate:

The Air Force Research Laboratory, in conjunction with the Hawaii Center for Advanced Transportation Technologies, is exploring microgrid and alternative fuel technologies in an effort to move military operations toward greater energy independence.

Under the terms of a recent five-year, $20 million cooperative agreement, AFRL will manage and facilitate a microgrid demonstration project at Joint Base Pearl Harbor-Hickam. When complete, the project is expected to enable the Hawaii Air National Guard base to function independently of the power grid for extended periods of time.

Kevin Spitzer, an AFRL program manager, said that initial design and integration efforts at the base are currently underway, and AFRL personnel are working in conjunction with Kansas City-based contractors Burns and McDonnell to identify and quantify project requirements.

The Hawaii Air National Guard began initial grid engineering, with solar panels and batteries being installed or moved in preparation for integration with additional microgrid equipment and controls. Spitzer said if everything progresses according to schedule, this installation and integration will begin next summer.

When complete, the project is expected to yield numerous benefits for the Air Force and beyond. For the 154th Wing of the Hawaii Air National Guard, which flies F-22 Raptors out of JB Pearl Harbor-Hickam, a separate microgrid ensures continuous flight and test operations even in the event of a disruption to the traditional power grid.

“On a broader scale, this project will demonstrate the practicality of microgrids and renewable energy sources to provide energy security for military facilities across the Air Force,” Spitzer said.

The project will also aid the state of Hawaii in their effort to explore new and more accessible forms of energy. Hawaii Gov. David Ige recently committed the state to a 100 percent renewable energy standard by the year 2045 with the signing of four separate bills.

“Hawaii’s commitment to alternative energies made them the natural choice for a project like this,” Spitzer said. “Hawaii’s high fuel costs mean that for us, the return on investment is much quicker. Plus, their commitment to a greener standard makes them great partners in this effort. It’s a potential win-win for everyone involved.” 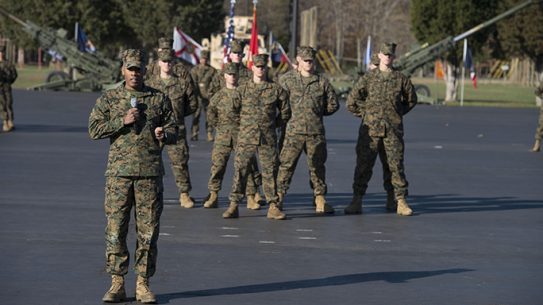 The U.S. Marine Officer Candidate School celebrated its anniversary during a graduation ceremony in...