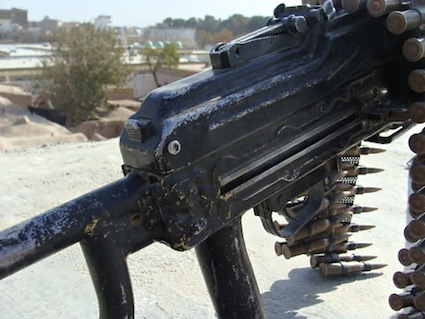 Look closely at the weapon at the top of this post. It’s a familiar sight: a PKM machine gun, one of the staples of the Afghan war (and, for that matter, most any war; this week alone I have seen images of PK variants from Afghanistan, Libya and Yemen, and that’s in just a routine skim). The PK series was first fielded by the Soviet Union in the 1960s, and like many Eastern bloc arms, it quickly spread to Soviet satellites, allies and proxies, and became one of the more commonly seen weapons of modern war. In this particular case, the PKM in the photograph was in Afghan government service guarding the walls at the main prison in Herat. It’s an easy identification to make. But do you notice anything unusual?

It’s not just that the weapon has been held together with post-factory welds, and then repainted. Look more closely. Or, better yet, refer to this other image. 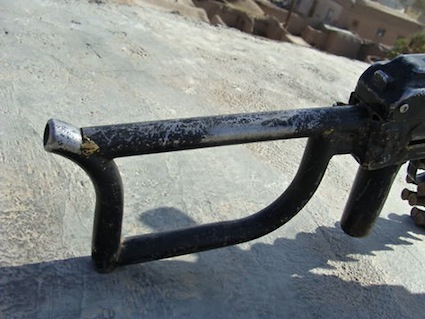 Gunspotters everywhere will recognize that as a fine observation, and a good one-liner, too. (Was that refurbished stock really cut from a bike frame? Could be.) And it certainly all plays right into one of this blog’s consistent themes.

Once infantry arms are loose in the field, they can last and last and last. Think of it. Who would have predicted back in the mid- to late-Soviet period, when these machine guns were designed and assembled, that they would a soak up scrap and then adorn guard towers at prisons run by an American-supported government in Afghanistan?

Read the rest of C.J. Chivers’ post at the At War N.Y. Times Blog. 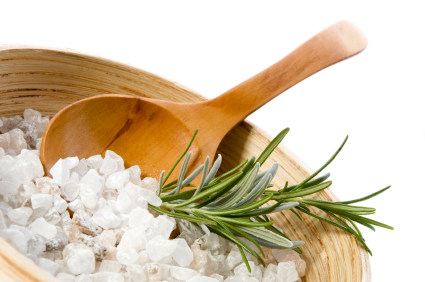 Image: Drew Schumann Look closely at the weapon at the top of this post.…