WARDAK PROVINCE, Afghanistan- U.S. Soldiers here have joined in a new program designed to increase security, empower local residents and encourage them to play a larger role in protecting their villages and keeping insurgents out of Wardak province.

Task Force Catamount Soldiers with the 2nd Battalion, 87th Infantry Regiment, launched a new program in the area known as the Afghan Public Protection Program, or AP3, a move initiated with and supported by local, elected officials. The program is a collaborative effort between the Afghan government and NATO forces to encourage responsible young men to assume a larger role in determining their future and securing a greater level of independence.

AP3 officers are instructed on several topics, including integrity, ethics, use of force, discipline, and the constitutional and police law of Afghanistan.

Keeping insurgents out of Wardak is a goal of this pioneer program, and its most recent graduates are establishing greater independence in the areas where they are located.

“This program is about empowerment and improving security and governance in Wardak,” Lyons said. “Wardak was chosen in particular so that it can be assessed during our deployment and we can accomplish the initial wave of success. It is a program that has been petitioned by [community council] members, local officials and political leaders across the country, and therefore has a strong cultural and legal foundation.”

Recently, children in the Jalrez Valley reported the location of a roadside to Afghan Public Protection Force officers. NATO forces were alerted and safely disposed of the device.

“Local residents are embracing the [program] and the concept of safeguarding their neighborhoods,” said Sgt. Maj. Patrick Corcoran, Task Force Catamount operations sergeant major. “Their cooperation shows a commitment to the coalition, their country, and the Afghan government. It has had very positive effects throughout the region, especially in the Jalrez Valley. Local residents are very receptive, and the Afghan Public Protection Force is thought of as a beneficial program.”

In many areas, villagers have been coerced into providing insurgents refuge, supplies and subsistence, because they lack the ability to defend themselves, and often are beyond the reach of Afghan security forces assistance. The AP3 program helps to remedy this problem by allowing local authorities to deny insurgents safe haven in their villages and to impede insurgent activity in their areas.

“I’ve spoken to local residents in the Jalrez bazaar,” he said. “They appreciate that local villagers patrol the area, and they believe the Afghan Public Protection Program will work. The local shop owners in Jalrez think it’s a great program, because it enables local residents to provide for their own security while simultaneously defending their communities and their country.” 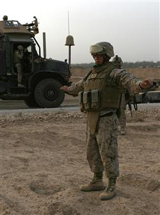