When one thinks about effective bulletproofing materials, things like Kevlar spring to mind. You know what doesn’t spring to mind? Goo. Yet an Air Force Academy cadet and a professor have garnered all sorts of attention for creating a thick gooey gel capable of enhancing body armor.

Cadet 1st Class Hayley Weir’s journey began in 2014 when her professor gave her an assignment to stop a bullet by combining carbon fiber, Kevlar and epoxy. She wanted to create an armor that was thinner, lighter and more flexible than the body armor commonly used today. To get started, she researched material for a prototype.

According to the Air Force Times, the Academy put her in touch with a chemistry advisor who suggested using a shear thickening fluid instead of the epoxy that hardens when dried. The fluid, which is called a “non-Newtonian fluid,” changes viscosity depending on if stress or force is applied to it. Essentially, the material is gooey until struck by something like a bullet. At that point, the material hardens and stops it.

Weir did six months of research on the project, but she nearly gave it up when she had to switch majors from materials chemistry to military and strategic studies. Fortunately, that’s when she met Dr. Ryan Burke, assistant professor with the USAF Academy’s Department of Military & Strategic Studies. Burke, the Academy says, holds a doctorate in public policy, is an expert in research and is a former Marine who knows his way around body armor.

“When she came to me with this idea, I said ‘let’s do it,’” Burke said. “Even if it is a miserable failure, I was interested in trying.”

Burke thought the idea of combining Kevlar and carbon fibers with shear thickening fluid to create bulletproof material had already been attempted.

“The armor industry is a multibillion dollar industry with people studying this on a daily basis as their main profession,” he told the Air Force Times.

But when Weir and Burke did a review of previous studies, but they couldn’t find anything similar.

“We knew Hayley had stumbled onto something unique here and innovative,” Burke said.

The two went to work. Using the Academy’s firing range, bullets, weapons and a high-speed camera, they tested multiple prototypes. After 20 failed attempts, their prototype stopped a 9mm round.

Weir and Burke’s work caught the attention of the U.S. Air Force, who invited the duo to the Air Force Civil Engineer Center (AFCEC) to present their findings.

Obviously they liked what they saw, because AFCEC researchers are now taking over and funding full development of the material, according to an Air Force press release.

Dr. Jeff Owens, a senior research chemist with AFCEC’s requirements, research & development division, has been blown away the results.

“We’re very pleased,” said Owens. “We now understand more about what the important variables are, so now we’re going to go back and pick all the variables apart, optimize each one and see if we can get up to a higher level of protection.”

In addition to stopping a 9mm round, the material is also capable of stopping a .44 magnum round at close range. This means it can be certified as type-3 body armor, which is usually worn by Air Force security forces personnel.

Owens and his team hope the material can eventually be used to stop rifle rounds and ballistics that require heavy and rigid armor. The material can be applied as a protective lining on objects ranging from body armor to tents and vehicles, the Air Force said.

“I don’t think it has actually set in how big this can get,” Weir stated. “I think this is going to take off and it’s going to be really awesome.”

Weir and Burke’s material is now patent pending. They have a year to improve the technology before filing for an official patent, the Air Force Academy said. 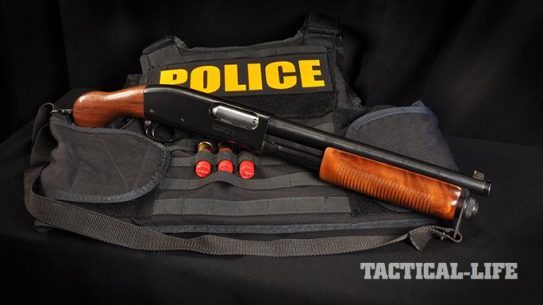 Meet the Witness Protection 870, the short-barreled shotgun carried by US Marshals throughout the...