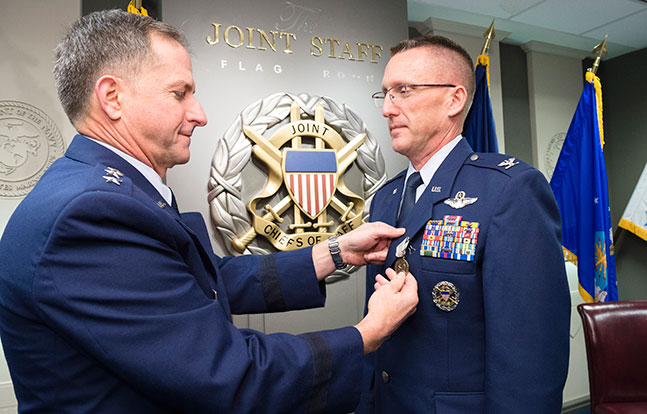 Lt. Gen. David L. Goldfein pins the Airman's Medal on Col. Richard Poston Dec. 10, 2014, in a ceremony held at the Pentagon in Washington D.C. Poston was recognized for his heroic actions on July 6, 2013, when he saved a young female from drowning in the Potomac River. Goldfein is the director of the Joint Staff and Poston is the assistant deputy director for political military affairs, strategic plans and policy, J-5 DD-Africa. (Defense Department photo/ U.S. Army Staff Sgt. Sean K. Harp)
Comment(s)

As then-Lt. Col. Richard Poston came around the bend while biking on the Mount Vernon Trail off Gravelly Point July 6, 2013, he could see something floating out in the water, but couldn’t quite make out what it was.

He continued down the path, only to have his recreational bike ride interrupted by a crowd of people looking out across the Potomac River.

“I slowed down and came to a stop … and I asked a lady what was going on,” said Poston, who has since promoted to the rank of colonel and is the assistant deputy director for political military affairs, strategic plans and policy, J-5 DD-Africa. “She said, ‘a boat sank and some people are trying to get to shore.’”

As he stood there, he saw five people stranded in the water, about 125 yards from shore. Furthest from him were three people yelling for help as they hung onto a life jacket to stay above water. Between the group and Poston were two younger females, slowly swimming to the shoreline.

Shocked to see that no one had made their way into the water, Poston reacted quickly, taking off his shirt and shoes and crawling down the river bank.

“I never really thought about endangering myself when I went out there,” Poston said. “I grew up around the water. My family water skis and all three of my boys have been lifeguards. I am comfortable in the water and knew how to do rescue swimming.”

Before he could get into the water, Poston said another biker followed him down the bank and offered his assistance, but he couldn’t swim.

“OK, don’t go out over your head and make sure you can touch,” Poston told him.

The man agreed and said that if Poston could get them close enough, he would help get the others to shore.

Assessing the situation, he noticed that the group of three appeared to be safe for the moment, so he changed course.

As he approached the girl, Poston understood that one of the most dangerous parts of a water rescue is when the victim tries to grasp hold of the rescuer. He did what he could to calm her down.

“I asked her if she could float on her back and she said, ‘yes.’ She rolled on her back really quickly and I grabbed her … (with) a cross-chest carry. I started towing her in, but about every third stroke, a big wave would wash over us and she would cough and panic,” he said.

To keep her calm, Poston assured her that she would be fine and that he wouldn’t let her go.

As they both swam back, Poston said that another man had gone in to assist the first girl while a third man was already swimming out to the farthest group. As Poston got closer to the shore, the guy who originally offered to help Poston was waiting to pull them to safety.

Once he made it to land, Poston noticed that the third man had reached the farthest group at about the same time as a Washington D.C. police boat. The police lowered their bow door, helped the stranded people aboard and brought them ashore.

Recognizing Poston for his act of heroism, Lt. Gen. David L. Goldfein, the director of the Joint Staff, presented him with the Airman’s Medal Dec. 10, in a ceremony held at the Pentagon.

“This is a rare opportunity to highlight the courageous efforts of an Airman,” Goldfein said. “This medal is the highest recognition for an act of heroism outside of combat. There are only a few of these given out each year.

“Col. Poston performed a courageous act. … As a result, a young girl is still with her family today,” Goldfein said. “It is an honor to have the privilege to present this decoration to Col. Poston.”

Even though Poston said he is honored to be recognized, he is convinced that most military members would have done the same thing. 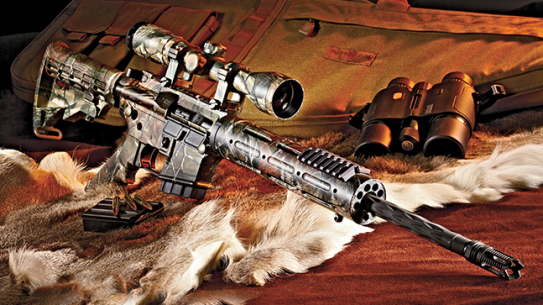