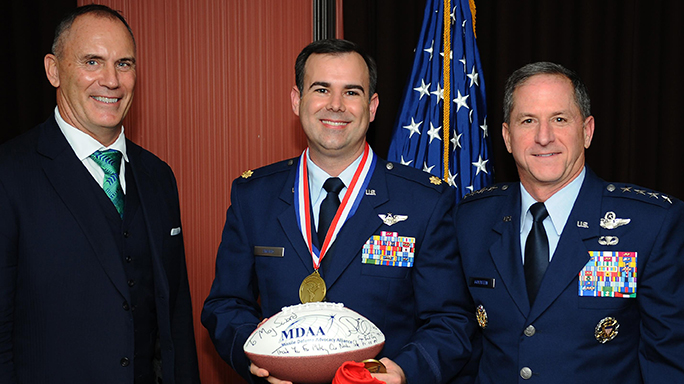 The following is a release from Secretary of the Air Force Public Affairs Command Information:

“This is a classic story of a young man with vision, a young man with credibility, and a young man who has great intellect,” Goldfein said. “He’s able to translate that into real plans that are now (being executed) in ways to better defending the (PACOM) region.”

According to Col. S. Edward Boxx, the Space and IAMD Division chief, Sward synchronized non-kinetic activities with active defenses by integrating offensive cyber capabilities into Pacific air and missile defense operations, and coordinated for the analysis of U.S. defenses with high-fidelity, advanced and emerging threat assessments.

While Sward has many more accomplishments contributing to his selection for the Air Force’s Defender of the Year, the vice chief remembered him from 2011 when he served on the integrated air and missile defense team supporting Goldfein, who served as the U.S. Air Forces Central Command commander at the time.

Goldfein was concerned about the threats that could potentially launch missiles throughout the region and needed to develop a response to this emerging threat. Sward assisted Goldfein in developing relationships with the Gulf Coalition Council and orchestrated bringing them together to create what Goldfein called the Gulf Combined Air Operations Center.

After Sward received the award, he thanked PACOM leadership for the support he has received and said he represents everyone that serves on Integrated Air and Missile Defense team in the Pacific.

“I’m extremely grateful for PACOM’s confidence, trust and ability they give our team to do this mission in the Pacific,” Sward said. “I’m fortunate to work with an innovative team at PACOM where we can touch policy where we can touch acquisitions and requirements and get after closing those gaps and write the plans and develop the courses of action to succeed in defense … it’s a ‘no fail’ mission.” 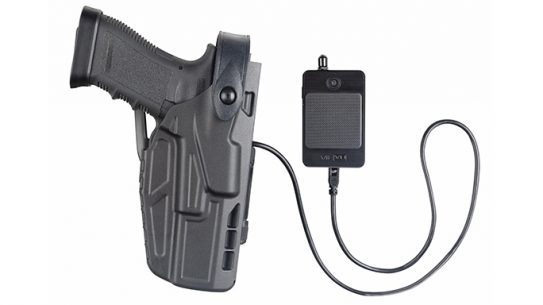 Auto-activation technology would cause body camera to record once weapon is drawn from the...