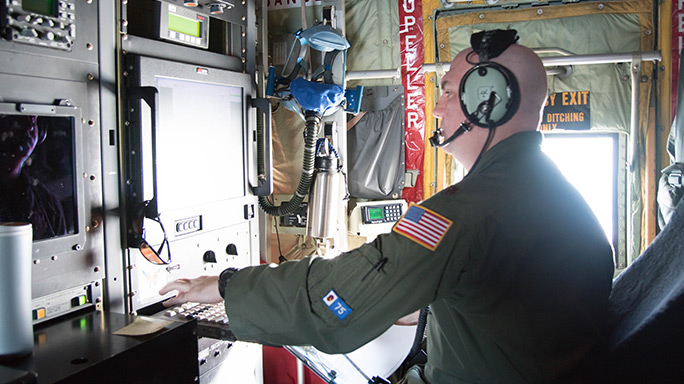 The Air Force Reserve’s 53rd Weather Reconnaissance Squadron flew a fix mission Sept. 1 out of Keesler Air Force Base into Tropical Storm Hermine, which was upgraded to a hurricane mid-flight.

In the afternoon, Hermine had max wind speeds of 70 mph at the surface, with a center about 110 miles due south of Panama City Beach, Fla., and was heading north, northeast at 16 mph. Hermine is the first named storm to hit the Gulf in the 2016 hurricane season and the first to hit the Florida coast since 2005.

“We stay as low as we safely can,” said Lt. Col. Jeff Ragusa, the aircraft commander for the recent mission.

A typical Hurricane Hunter crew includes two pilots, a navigator, an aerial reconnaissance weather officer and a dropsonde loadmaster. The pilots and navigator work together to get the plane in the air and through the storm in what’s called an alpha pattern, which is an “X” that crosses through the center of the storm. The first two passes are used to find the exact center of the storm.

“That’s where the hunting comes in in Hurricane Hunters; we’re hunting for the eye of the storm,” Ragusa said.

Throughout the flight, the navigator constantly analyzes the radar and makes recommendations to the pilot about which course to take and when a patch of weather should be avoided. Colors on the radar indicate how intense a patch of weather can be. Green indicates rain, yellow indicates moderate rain and red typically represents thunderstorm-like conditions.

Only 12 airplanes in the world can fly in the red and the Hurricane Hunters have 10 of them, said Ragusa, adding that everyone else is required to fly around severe weather. Due to the nature of the weather reconnaissance mission, the 53rd WRS has a special waiver that allows them to fly through strong storms. The other two planes are P-3 Orions that belong to the National Oceanic and Atmospheric Administration.

Once in the center of the storm, the loadmaster prepares a dropsonde to be launched from a tube within the WC-130J Hercules and fall to the surface of the ocean recording wind speed, air pressure and storm rotation. That data is then collected and recorded by the ARWO and sent to the National Hurricane Center in real time via GPS.

“These missions are important because they increase the accuracy of a forecast by 20-30 percent,” said Tech. Sgt. Tom Barnby, a 53rd WRS loadmaster.

Because of the data the crew sent to the National Hurricane Center, the tropical storm was upgraded to a hurricane, giving people who might be affected a better idea of how to prepare for it.

To keep up with the storm and the Hurricane Hunters mission, check out the plan of the day or visit the National Hurricane Center. 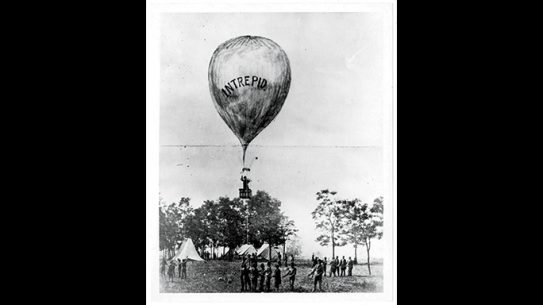 Marking the first use of a forward artillery observer, hot air balloons were an...