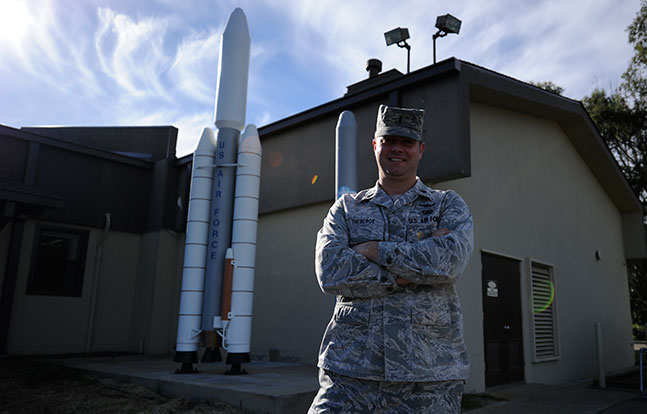 An Air Force lieutenant, stationed at Vandenberg, assisted in the rescue of a woman involved in a vehicle accident near Santa Barbara, California, Dec. 1.

On leave and intending to meet his girlfriend for lunch, 1st Lt. Tyler Theberge, the 4th Space Launch Squadron deputy chief engineer, noticed something awry as he approached an intersection on State Route 154.

“I decided to take the scenic route to Santa Barbara and as I approached the intersection of 154, I noticed there were several cars parked along the road,” Theberge said. “When I pulled up to the stop sign I saw that there was an SUV in the ditch, on the other side of the road. It appeared to have struck an embankment and had rolled onto the driver’s side.”

After he assessed the situation and realized fellow bystanders at the scene were not approaching the vehicle, the lieutenant decided to intervene.

“As I was waiting for traffic to pass at the intersection, I noticed that all the bystanders were on their phones and still in their cars, probably calling 911,” Theberge said. “At that point I knew I had to step in.”

Once he parked his own vehicle a safe distance from the scene, Theberge said he advanced toward the vehicle. Assisted by two fellow bystanders, he then entered the vehicle to reach the victim.

“When I finally reached the car I was met by two other individuals who held the door open while I entered the passenger side of the vehicle,” Theberge said. “Since the vehicle was on its driver’s side, it was a tremendous help to have extra hands hold the door open. When I entered the vehicle I found one female victim – the driver. I squeezed her hand and called out to her to check for responsiveness, but there was nothing. I also didn’t see any signs of bleeding, so at that point I had one of the bystanders retrieve my first aid kit from my vehicle. I then checked for breathing and circulation while (making sure) not to move her – in case of a head, neck or back injury.”

Shortly after having trouble finding a pulse, Theberge said he noticed the victim had also stopped breathing, so he swiftly administered CPR.

“With the vehicle partially on its side, there was no easy way to extract the driver so I reclined the driver’s seat and immediately began CPR,” Theberge recounted. “Luckily, after several minutes of doing solo CPR, another bystander with first responder training arrived, at which point we switched to buddy CPR. The two of us continued this for several more minutes until the fire department arrived and we stepped back and let the professionals do their job.”

Theberge’s leadership said they couldn’t be prouder of his actions, and believe he is a testament to Air Force character.

“As a leader in the 4th SLS, seeing this type of heroism makes me feel proud to be associated with a unit that has such outstanding individuals,” said Maj. Lawrence Ware, the 4th SLS director of operations. “His quick thinking and preparedness for the situation, shows how the Air Force continues to seek out and train individuals who will rise up to any challenge and situation.”

The lieutenant not only attributes his reaction to training he received before joining the Air Force, but also what he’s learned since.

“Training really played a key part,” Theberge said. “I have been fortunate enough to have 10 years of trauma training spread across my time as a life guard, national ski patroller and military member. I know Air Force training can be tedious at times, but it really was what helped give me the skills and tools to act. There is a reason we train like we fight – because it works.”

For some, Theberge’s actions came as no surprise and highlight the importance of Air Force training, for all Airmen.

“Knowing lieutenant Theberge, I wouldn’t have expected him to act any other way in a situation like this,” Ware said. “I think his actions show other Airmen that no matter what they are doing, or what time of day it is, they may need to push their own interests aside and act on their instincts and training.”

Although those around him commend his heroism, Theberge remains humble and credited everyone involved.

“I feel strange receiving praise for my actions because the credit truly needs to go to everyone who played a part that day,” Theberge explained. “From the person who made the first 911 call, to the bystanders who helped me with the victim, to the emergency dispatcher who sent help and everyone else who responded and played a role. I didn’t do anything extraordinary — I just contributed where I could.” 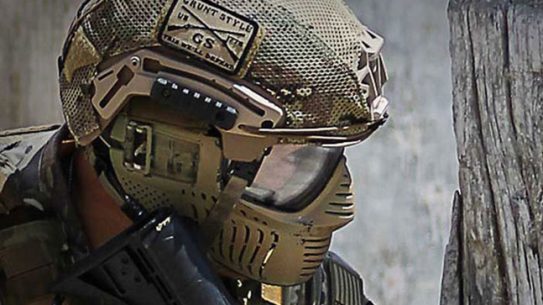 Paintball allows civilians who are interested in military-style combat to safely participate and learn...