The following is a release from Jeremy Gerlach, Joint Base San Antonio-Lackland Public Affairs:

In July 2011, Staff Sgt. August O’Neill, a pararescueman, was sent to rescue a group of Marines pinned down in Afghanistan when enemy insurgents opened fire on his team’s helicopter.

A round bounced off the helicopter’s door, tearing through both of O’Neill’s lower legs and critically wounding his left. Over the next three-and-a-half years, doctors performed 20 surgeries as they tried to save the limb.

O’Neill finally told doctors to remove his left leg last year, but he remains determined to continue his career as a pararescueman.

“I haven’t looked back since,” said O’Neill, who’s training with the 342nd Training Squadron at Joint Base San Antonio-Lackland, as he prepares to requalify for assignment to a pararescue team.

“I knew I wasn’t done doing this job,” he added.

Pararescue isn’t an easy job for any Airman, let alone one who’s had their leg amputated just above the knee. But O’Neill believes he’s still up to the task.

“There are going to be issues that come up here and there,” he said. “But I’m sure I’ll make it back on a team. Just like anybody who hasn’t been in their job for a long time … I basically need to make sure everybody else knows that I’m capable of doing the job, and … I need to make sure I haven’t lost anything that I need.”

Pararescumen serve in one of the most physically demanding fields in the armed forces, with the journey from basic training to joining an operational unit spanning almost two years, according to the technical training course guide.

O’Neill said he isn’t expecting any special treatment as he trains over the next few months to demonstrate his mission readiness.

“I wouldn’t want to do this job if I couldn’t meet the same qualifications as everybody else, because that would put the people on my team at risk,” he explained. “You’re only as strong as your weakest member, so if I can’t keep up with them, that means they’re carrying me and that’s not something that I want.”

Living with a prosthetic is a minor annoyance in terms of his daily routine, O’Neill said. He doesn’t sleep with the leg on, for example, so he has to hop to the bathroom or the refrigerator when he wakes in the middle of the night.

“It’s just finding a ‘new normal’ for all the things I was able to do with two legs before,” he explained. “I’ve just been finding ways to get everything done.”

That minor annoyance turns into a bigger challenge during pararescue training, where O’Neill will have to depend on his ingenuity and adaptability to meet the other demands to the job.

“Anything from picking up a patient — where I can’t just roll down on a knee and lift them up — I have to find a different way to brace myself to get people up and move out,” he said. “Everything is challenging, but it’s just a matter of finding out how to do it.”

As if navigating this “new normal” wasn’t enough, O’Neill said his training has been grueling.

“It’s tough mentally and physically,” he said. “You aren’t pushed to your limit — you’re pushed beyond that — to the limits that the instructors know you can reach. There are so many qualifications that you need to keep up with that you … can’t do so without being mentally prepared.”
One thing, at least, hasn’t changed for O’Neill since returning from his injury.

“I don’t like running,” he said, laughing. “I’ve never been a distance runner and after four years of not running … that’s still difficult, but I can still run. It’s not as pretty as it was before, but I’m able to at least get the job done.” 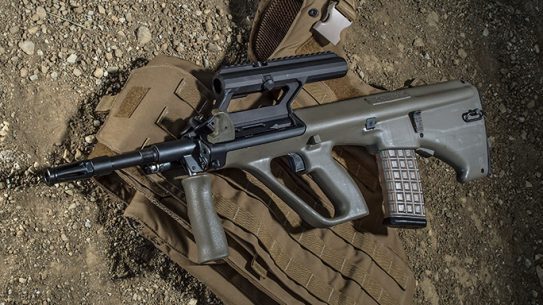 Whether for those in uniform or someone looking for 24/7 home defense, the Steyr...