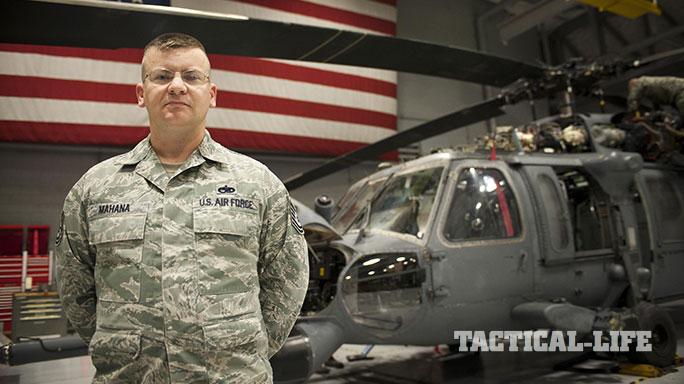 For Tech. Sgt. Justin Mahana, the 823rd Maintenance Squadron support section chief, life is about helping those in need.

When the 17-year veteran learned a coworker’s truck had broken down two-and-a-half hours away in Lake Havasu, Arizona, he volunteered his truck, trailer and time to help the Airman get it back to his Las Vegas-area residence on Jan. 6.

However, the ride back home would not go as smooth or uneventful as he originally planned.

“After loading the truck up on the trailer, we were on our way back and stopped at a gas station to get air in our tires and make sure everything was good to go,” Mahana said. “While we were at the gas station, which was literally around the corner from where we loaded up the truck, I heard a loud crack so I turned to see what happened and I saw a big cloud of dust. I stepped out to look a little closer and saw a black SUV across the intersection that looked like it had hit the median and was immobilized.”

After observing the vehicle for about 30 to 45 seconds, Mahana noticed nobody had exited the vehicle.

“That’s the first thing that kind of triggered me something wasn’t right,” he said. “Nobody else stopped or anything, and the car was by itself.”

Mahana told his passenger he was going to run across the street to see if anyone needed help. As he made his way across the intersection, Mahana could hear the vehicle’s engine revs reverberating off the cool desert floor, so he hollered back for the Airman to call 911.

“It sounded like the accelerator was stuck, so I kind of picked up my pace a little bit to see if whoever was inside was okay and I could see a lady in the driver seat kind of moving around,” Mahana said. “Her windows were up so I was motioning to her to cut off the vehicle, but she wasn’t responding to me. About the time I started around the back of the vehicle, the engine rpms were way high — it was just against the rev limiter and then finally the engine let go.”

An avid mechanic and car enthusiast, Mahana said he picked up on what was going on with the vehicle, so when the engine blew, he knew it would crack the engine block and released oil would drench the ground below.

“That’s when the fire started; like two big puffs of black smoke and then just flames came out from underneath the car,” Mahana said. “It didn’t engulf in flames or anything, but it was still smoldering underneath. I ran around the car, opened the driver’s door, asked her if she was okay, but she didn’t want to get out of the car — she was holding on to the steering wheel with a death grip.”

As the flames grew more intense with each failed attempt to coax the shocked woman out of the car with words, Mahana knew they were running out of time, so he took a different course of action.

“I checked the passenger and back seats to see if there was anybody else in the car — there wasn’t — so I finally just hooked my arm around her and pretty much just yanked her out and got her away from the car,” Mahana said. “I don’t think she would’ve gotten out of the car on her own because she was in shock and just didn’t know what was going on.”

As the first responders arrived on scene, the fire grew worse, but Mahana was only focused on consoling the middle-aged woman he had just pulled from the burning vehicle.

“I was trying to keep her from going further into shock,” he said. “There was tons of smoke and the smell of burning plastic was bad.”

After being thanked by the first responders, Mahana was back on the road.

“I’m not surprised at all that sergeant Mahana was able to carry out those necessary actions, because it’s part of his mantra to put others before himself in everything he does,” said Master Sgt. Heather Gray, the 823rd MXS maintenance flight chief. “And you can ask anybody around here and they’ll tell you the same thing.”

Seventeen years ago, Mahana entered the Air Force because he wanted to make a difference in the lives of others.  While his everyday job ensures he gets to do that — the 823rd MXS is responsible for the maintenance and upkeep of HH-60G Pave Hawks that are utilized by pararescuemen when conducting combat search and rescue missions as well as humanitarian relief operations — it’s his actions away from the job that shows exactly what kind of man Mahana is.

“I help out wherever I can; it’s just the way I was raised,” Mahana said. “I don’t do anything for the recognition; it’s just because it’s the right thing to do. Whatever is written up about this whole thing is going to be more than I expected and really more than I wanted.” 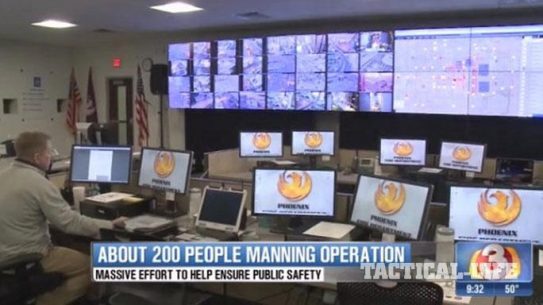 Law enforcement personnel in Phoenix will be able to monitor multiple crowded areas during...