The following is a release from Sean Kimmons, Air Force News Service:

The head of Operation Inherent Resolve’s air campaign said Feb. 18 the “most precise air campaign in history” has severely hurt terrorist plans across Iraq and Syria, with more airstrikes to come.

“There is no doubt coalition airpower has and continues to dramatically degrade Daesh’s ability to fight and conduct operations,” Lt. Gen. Charles Brown Jr., commander of U.S. Air Forces Central Command, said of the terrorist group also known as the Islamic State of Iraq and the Levant (ISIL).

Ongoing missions by the 19-nation air coalition is exploiting ISIL’s weaknesses, as its leaders and fighters flee in large numbers due to effective airpower, said Brown, who serves as the operation’s combined forces air component commander.

“As the coalition has garnered a greater understanding of the enemy, our airpower efforts have evolved and it’s clear airpower is a vital element to this fight,” Brown said from Al Udeid Air Base, Qatar.

There are no plans for the air campaign to be impacted by a possible ceasefire to let nongovernmental agencies deliver food and medicine to starving civilians in besieged Syrian towns.

“It doesn’t stop operations against Daesh or ISIL,” Brown said of the relief effort. “The areas where most of the humanitarian aid is going are areas where we don’t operate.”

The general also denied coalition involvement in the Feb. 15 bombing of four hospitals and a school in northern Syria that left dozens of people dead.

“There are only two people flying in that area — the Russians and the Syrians,” Brown said of the non-coalition forces. “I can guarantee you that it wasn’t the coalition.”

Brown also touted successful airstrikes against ISIL-controlled oil facilities and monetary centers, saying that they’ve crippled their financial resources. This has resulted in ISIL cutting funds to its fighters and combat operations.

“I think it surprised Daesh because we were able to do very precise weaponeering in order to strike them and also minimize civilian casualties,” he said.

Eight coalition nations recently dropped about 80 precision-guided bombs at the heart of terrorist command and control, logistics and sanctuary areas in Al Qaim, Iraq, and Abu Kamal, Syria, during another set of strikes, according to the general.

“The objective of the coalition airstrikes was to restrict Daesh movement throughout the Euphrates River Valley,” he said.

Airpower has been instrumental in ground operations, particularly in Ramadi, a former stronghold for the extremists.

“The recent success of Iraqi Security Forces in clearing Ramadi comes after months of supporting ground forces with close air support,” he said.

Brown credited airstrikes with helping take back the city of Sinjar in northern Iraq, as well as Hasakah and the Tishreen Dam in Syria.

“We are making progress,” he said. “We will continue delivering airpower to destroy and eventually defeat Daesh.” 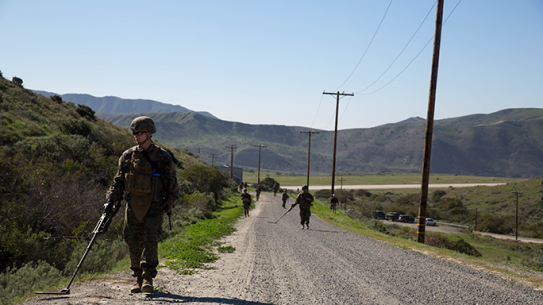 The new counter-IED training course was designed to create a more streamlined and geographically...