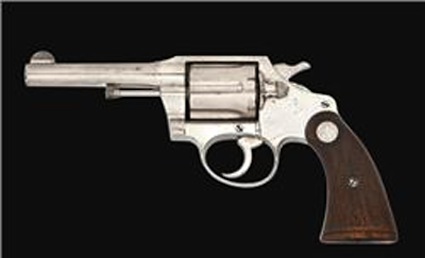 Christie’s is auctioning off a collection of guns and other American memorabilia including, most notably, a pistol once owned by infamous gangster Al Capone.

It’s expected to sell for as much as $115,000, and comes with a letter and signed affidavit from Capone’s brother’s widow, stating the gun was owned and used by Al Capone, according to the auction house.

From Christie’s Auction House:
Al Capone’s Revolver — Perhaps the most famous American gangster of all time, Alphonse Gabriel “Al” Capone (1899 –1947) has been immortalized in numerous books and articles, as well as countless films. The stereotypical mobster image – blue pinstripe suit, tilted fedora – is based upon photographs of Capone, and his personality has been used as a template for copious fictional criminal masterminds. Capone’s revolver has exceptional provenance and is being sold by a Private Collector. Colt records indicate that this pistol was manufactured in May 1929, a significant date in Capone’s life – the same year as the famous St.Valentine’s Day Massacre. At that time this would have been amongst the most reliable and concealable handguns available. The revolver is to be sold with an original personal letter from Madeleine Capone Morichetti, widow of Al’s brother, Ralph Capone confirming that the gun “…previously belonged to and was only used by Al Capone while he was alive”, as well as a copy of the affidavit sworn by her, on 25th March 1990. The oath confirms that the revolver was previously owned by her brother-in-law. Capone was simultaneously regarded a folk hero and a public enemy – despite his illegitimate occupation, he was regarded by many to be a ‘modern-day Robin Hood’, due to his various charitable endeavors using the money he made from his activities.

Police: Guns were destroyed during probe of Detroit crime lab.

Image: Christies Christie's is auctioning off a collection of guns and other American memorabilia…