A pistol-packing grandmother in Decatur hopes intruders will think twice before messing with her again.

Police say 69-year-old Ethel Jones shot 18-year-old Michael O’Neal Bynum in the abdomen when she said she found him inside her bedroom. Bynum lived less than 200 yards from Jones, but she said she didn’t know him.

“I hope this will make people have second thoughts before they break into a home in our neighborhood and stop some of the crime we’ve had around here,” she told The Decatur Daily.

Jones said she sleeps with her gun under a pillow next to her. She said she was going to the bathroom shortly before 3 a.m. Monday when she thought she heard someone at her back door and then her front door. She grabbed her gun as a precaution and came out of the bathroom to find someone in her bedroom with a pen light.

“I shot three times, and he ran away bleeding,” she said.

Police said Bynum returned to his residence and went by private vehicle to Decatur General Hospital. Then he was transferred to Huntsville Hospital, where he was listed in stable condition.

Police says Bynum, who was on probation for a burglary conviction, faces a charge of second-degree burglary. Officers said it appears he got into the home by removing a window air conditioner from a back window.

Jones, who’s retired after 27 years as an auditor with Copeland Corp., said she’s had a gun for years.

“I’m glad I had it,” she said. “I don’t know what he would have done when he didn’t find what he was looking for. He might have killed me. You can’t ever tell what people might do these days.” 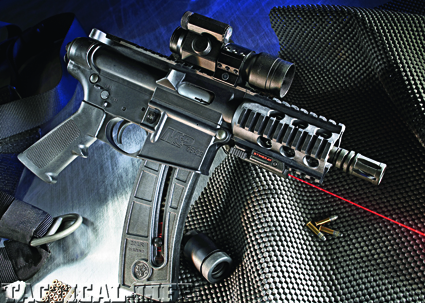