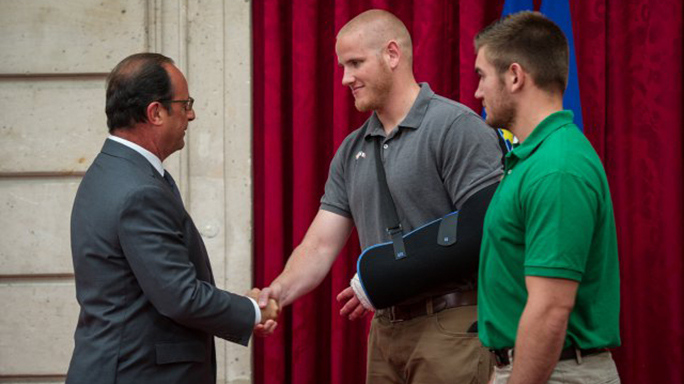 The following is a release from the National Guard Bureau:

Spc. Aleksander R. Skarlatos, one of three Americans who subdued a heavily armed gunman on a Paris-bound train, will be awarded the Soldiers Medal – the U.S. Army’s highest award for acts of heroism not involving actual conflict with an enemy.

Senior Army leaders announced Tuesday that Skarlatos, a member of the Oregon Army National Guard, will receive the award after reviewing information submitted by the National Guard Bureau.

Skarlatos was traveling from Amsterdam to Paris when a gunman emerged from a train lavatory carrying an AK-47 and a Lugar pistol. After hearing the sound of gunfire, Skarlatos called to others on the train to act, then charged the gunman.

He then “forcefully wrestled the two firearms from the gunman’s possession,” according to the award submission. “As the gunman fought relentlessly, wielding a box-cutting razor, Spc. Skarlatos seized the assailant’s own rifle to employ as a blunt weapon,” knocking the gunman unconscious, then securing him “with makeshift restraints.”

“Spc. Skarlatos’ actions that day epitomize what we mean by a Soldier of character – one who lives by a personal code where dedication to duty and taking care of others is sacred,” said Army Secretary John M. McHugh. “His actions, and those of his fellow serviceman and passengers, exemplify the highest standards of selfless service. We are proud to count him in our ranks.”

Skarlatos and two of his childhood friends, Airman 1st Class Spencer Stone and Anthony Sadler, were on vacation traveling from Amsterdam to Paris on the train. Skarlatos is a member the Oregon National Guard’s 41st Infantry Brigade Combat Team.

He is being awarded the Soldiers Medal “for extraordinary heroism above and beyond the call of duty” and the medal’s citation reads, in part, that “Specialist Skarlatos distinguished himself in a courageous manner, voluntarily accepting risk to his own life,” and that his “brave actions prevented a potentially catastrophic loss of life.”

“On behalf of our Army, I commend Spc. Aleksander Skarlatos for his heroic actions Friday that saved hundreds of lives by awarding him the Soldier’s Medal,” said Army Chief of Staff Gen. Mark A. Milley. “His extraordinarily heroic effort, at the risk to his own life, truly exemplifies our Army values. I am proud to call you a hero and a Soldier.”

Stone has been similarly nominated for the Airman’s medal, the U.S. Air Force’s highest non-combat award.

“While the investigation into the attack is in its early stages, it is clear that their heroic actions may have prevented a far worse tragedy,” President Barack Obama said in a statement.

“We often use the word hero, and in this case I know that word has never been more appropriate,” said Jane D. Hartley, the U.S. Ambassador to France. “They are truly heroes. When most of us would run away, Spencer, Alek and Anthony ran into the line of fire, saying ‘let’s go.’ Those words changed the fate of many.”

News reports indicate that after opening fire in an adjacent car the attacker stopped to reload. That’s when Skarlatos spotted him emerging from the lavatory.

Stone described the scene: “I was asleep with my headphones on and my friend, Alek, was sitting to the left of me and Anthony was sitting to my right across the aisle. I wake up and I see Alek moving around saying ‘oh crap! Oh crap!'”

Skarlatos motioned to the gunman, who had entered the cabin brandishing an AK-style assault rifle.

“I kinda turn around and see the guy,” Stone said, “and he’s got the AK, he’s trying to charge it. I just throw my headphones off and turn around in my seat, get low and kinda look around.”

At this point the gunman had passed Stone and Skarlatos. It was at that moment their lives changed.  ”Alek taps me on the shoulder and says ‘go get ’em!’ and that’s when I got up and I sprinted at him.”

For Skarlatos, it was a split-second decision to act.

“It wasn’t a conscious decision,” he said. “We didn’t even have time to think about it. We just acted.”

Stone reached the attacker first, tackled him and began to grapple with him.

“I was feeling for the gun and couldn’t find it,” Stone said. “I felt it a couple times but he kept taking it away. So I just put him in a rear naked choke to protect myself and my friend, Alek [Skarlatos], came up and took the [rifle].”

Stone was injured when the attacker slashed him with a box cutter, nearly severing Stone’s thumb and causing him to lose his grip on the attacker. Skarlatos, Stone and Sadler then were able to surround the attacker and finally subdue him, Stone said.

“If it wasn’t for Alek and Anthony, I’d be dead,” Stone said. “I wouldn’t have been able to do it by myself. He definitely woulda’ got me.”

“He seemed like he was ready to fight to the end,” Stone said. “So were we.”

Once the gunman was down the trio began assessing any other threats in the area and provided medical attention to a passenger who had been injured by the attacker.

Officials said the actions of Skarlatos and Stone would be reviewed and the two would be presented with any appropriate U.S. awards for their actions. Awards aside, others were glad somebody intervened in the attacker’s plans.

“It’s fantastic that no matter who it was, someone stepped up to stop such a horrific event,” said Maj. Stephen Bomar, a spokesperson with the Oregon National Guard. “We’re absolutely proud that it happened to be someone from the Oregon Army National Guard.”

“These men are true heroes. The Oregon National Guard is very proud of Spc. Skarlatos. His quick reaction, his courage, and his bravery undoubtedly saved many lives, for which we are thankful beyond words. He is a true citizen soldier who displayed the courage each of us would hope to find in ourselves,” said Brig. Gen. Michael E. Stencel, acting adjutant general, Oregon. 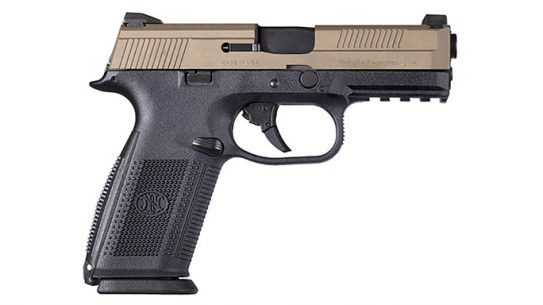