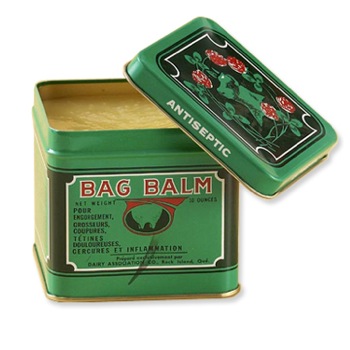 “I’ve been here 14 years,” said accounts-receivable clerk Shawna Wilkerson, the other half. “The oddest one I’ve heard was somebody who reloads his ammunition. He puts Bag Balm on the bullet casing and it makes it easier to reload ’em.”

Developed in 1899 to soothe the irritated udders of milking cows, the substance with the mild medicinal odor has evolved into a medicine chest must-have, with as many uses as Elmer’s glue.

According to Bag Balm lore, the stuff went from barns to bedrooms when dairy farmers’ wives noticed how smooth their spouses’ fingers were after using it on cows’ udders. The wives were jealous.

Bag Balm went to the North Pole with Admiral Byrd, to Allied troops in World War II, who used it to keep weapons from corroding, to Ground Zero for the paws of cadaver-sniffing dogs searching the World Trade Center rubble, and to troops in Iraq and Afghanistan.

Sold off pet care shelves and at farm stores for $8.99 per 10-oz. green tub (with cow’s head on the lid), it’s made of petrolatum, lanolin and an antiseptic, 8-hydroxyquinoline sulfate – substantially the same formula used since John L. Norris bought it from a Wells River druggist before the turn of the century.

It is made in a one-room “plant” by the family owned Dairy Association Co., Inc. – six employees, two officers and no sales force – operating in a cluster of converted railroad buildings in this small (pop. 1,215) northern Vermont town.

Petrolatum is shoveled from 50-gallon drums into a large vat and blended with lanolin from Uruguay, then heated to 95 degrees. A machine quickly squirts the goop into metal cans that are cooled, capped and packaged.

The plant is inspected annually by the U.S. Food and Drug Administration, though the product is marketed for use by animals, not humans.

Distributed by wholesalers and sold retail in farm stores, national drugstore chains and general stores, its popularity has grown largely with word-of-mouth advertising as converts becomes users and then devotees.

Read the rest of the AP story via CBS here.

"I've been here 14 years," said accounts-receivable clerk Shawna Wilkerson, the other half. "The…