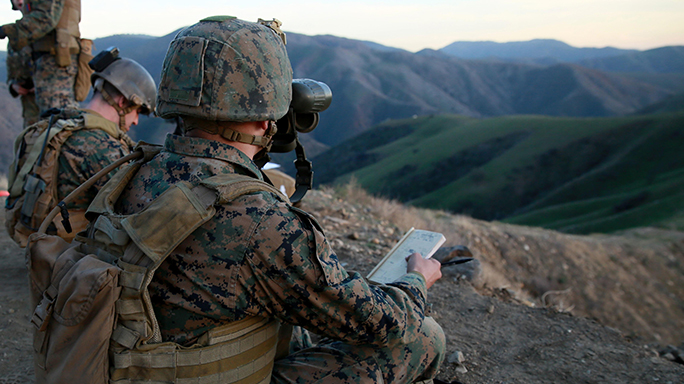 A Joint Fire Observer watches the impact of an 81 mm mortar round to forward corrections needed to accurately hit a target during training on the hillsides of Marine Corps Base Camp Pendleton, California, Jan. 13, 2016. The JFOs work hand-in-hand with the Joint Tactical Attack Controllers to accurately and effectively strike targets with either artillery or aircraft. The Marines are with 1st Air Naval Gunfire Liaison Company, I Marine Expeditionary Force.
(Photo by Lance Cpl. Timothy Valero)
Comment(s)

The following is a release from Lance Cpl. Timothy Valero, I Marine Expeditionary Force:

The distant roar of a helicopter could be heard faintly drawing closer. Far beneath its whirling blades, a unit of Marines, unfazed by the noise, sat patiently with their attention focused off in the distance. A piercing sound broke the never-ending roar of the helicopter.

Over the radio, a pilot yelled, “Rocket out.” Within seconds, the ground rumbled, as the thundering noise of the rocket hit its target. Another voice cracked over the radio, “Good hit, good hit.” The target met the devastating power of the AH-1W Super Cobra attack helicopter.

The Marines of 1st Air Naval GunfireLiaison Company, I Marine Expeditionary Force, are often found training to call for air support and fire from artillery. The ANGLICO Marines perfected their skills coordinating fire onto targets across the hilltops of Marine Corps Base Camp Pendleton, Calif., Jan. 13, 2016.

The mission of the training was to allow the Joint Terminal Attack Controller and Joint Fire Observers the opportunity to refresh their skills with directing fire from various forms.

“I want [the Marines who recently joined the unit] to understand and grasp the concept of how calling for fire actually works,” said Gunnery Sgt. Paul Smith, a fire support man and a weapons and tactics instructor with 1st ANGLICO. “I want them to see it, I want them to hear it, and I want them to be involved and immersed in it.”

Calls for fire teaches Marines the skills and information needed to attend and be successful in the classes to become a JTAC. The job of a JTAC is to coordinate different methods of fire from data received from the JFO who gathers and records the target data.

“As a JFO, we work hand-in-hand with the JTACs,” said Sgt. Alex Schargorodsky, a field radio operator and JFO with 1st ANGLICO. “Our responsibility is to effectively and correctly gather and record target information and control fire from artillery pieces.”

ANGLICO Marines trained into the early hours of the morning, taking turns requesting and directing fire onto targets scattered along the hillsides. They used maps and range-finding devices to send a hail of fire from mortars, machine guns and rockets from helicopters providing air support.

“This training is a refresher in order to keep the Marines’ skills sharp, because this is a very perishable skill,” said Smith, a New Orleans native.

The Marines of 1st ANGLICO did not train alone on the hilltop. JTACs from the Air Force as well as the Navy came to Camp Pendleton to perfect their own skills while sharing experiences and learning new techniques from fellow service members.

“It’s not often we cross-train with other U.S. military branches,” said Smith. “We frequently conduct training with our coalition forces. Throughout the year, we will be training with units from Britain and Japan during various exercises. The training doesn’t only aid the Marines of ANGLICO, but also the partnering.”

Being an observer for only several months, Schargorodsky said he valued the training and knowledge received from the experienced Marines and values the opportunities to teach and mentor the junior Marines as they grow and move through the ranks of ANGLICO.

“We are out here trying to learn and become better from the more experienced Marines,” said Schargorodsky. “We are a unit that possesses unique experiences, and we need to be constantly ready and on top of our training. Everyone looks to ANGLICO to get the job done. We have a reputation of excellence to uphold.” 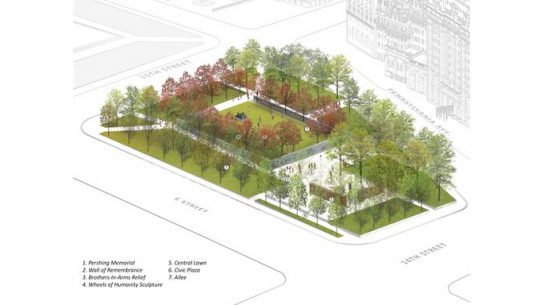 The World War I Memorial will be located in Pershing Park, near the White...