Pakistan’s intelligence service has arrested the owner of a safe house rented to the CIA to observe Osama bin Laden’s compound before the U.S. raid that killed the al-Qaida leader, as well as a “handful” of other Pakistanis, a U.S. official said late Tuesday.

In Pakistan, a Western official confirmed a New York Times report that five of the Pakistani informants who fed information to the CIA before the May 2 raid were arrested by Pakistan’s top military spy agency.

The officials spoke to The Associated Press on the condition of anonymity to discuss sensitive intelligence matters. A spokesman for the Pakistani spy agency declined to comment.
The Times, in an article posted on its website late Tuesday, said detained informants included a Pakistani army major who officials said copied the license plates of cars visiting bin Laden’s compound in Pakistan in the weeks before the raid.

The fate of the CIA informants who were arrested was unclear, but American officials told the newspaper that CIA Director Leon Panetta raised the issue when he visited Islamabad last week to meet with Pakistani military and intelligence officers.

Source: Kimberly Dozier and Kathy Gannon for The Associated Press. 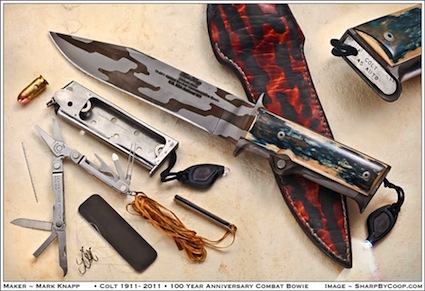 The Mark Knapp 1911 Combat Survivor Knife is a custom-built bowie design based on...