According to Liz Wylie, spokeswoman for the MVPD, when the father arrived to his 240 Ortega Ave. apartment at around 10:48 p.m. on Aug. 2, “he heard running and someone coming up behind him.”

As the victim, 43, stepped into his apartment the first suspect, a black male with a shaved head about 5 feet 8 inches tall who carried a small black semi-auto handgun, allegedly grabbed him from behind and put his arm around his neck.

The suspect pointed the gun about two inches from the victim’s head.

Wylie explained that the victim “instinctively grabbed the barrel of the gun and tried to force it out of the suspect’s hands or tried to point it away from his head.”

The victim’s son, 15, who was inside the apartment with a friend, “immediately got up from a chair and started walking towards his dad to help him,” said Wylie.

Allegedly the suspect then pointed the gun at the son. Then two more suspects approached the father from behind and began to search him.

At this time, the son’s friend–who happen to have had a BB gun in his hand as he sat on the couch–pointed the BB gun at the gun-wielding suspect and “drew the slide back and released it, which made the BB gun sound like he had just loaded a round into the chamber of a real gun,” Wylie said.

When the suspects saw the son’s friend, 15, point the BB gun at them, they backed out the door. 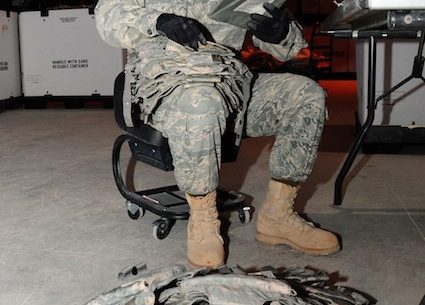 According to Liz Wylie, spokeswoman for the MVPD, when the father arrived to his…