Three U.S. Navy pilots were recently awarded the Armed Forces’ Air Medal for valor after their quick thinking and reaction saved a plane and potentially their own lives.

The pilots, assigned to the “Screwtops” of Airborne Early Warning (VAW) Squadron 123, were awarded the medal aboard aircraft carrier USS Dwight D. Eisenhower (CVN 69) (Ike) following a flight deck mishap March 18, according to a Navy release.

Lt. Cmdr. Thomas Browning, Lt. Cmdr. Kellen Smith and Lt. Matthew Halliwell were given the award “for reacting in time to prevent the loss of an aircraft by maintaining positive control during the mishap,” according to the release.

The award is presented for heroic actions or meritorious service while participating in aerial flight.

With Halliwell in the pilot’s seat, the Hawkeye touched down on the flight deck and caught the wire. As they began to decelerate, the arresting cable snapped and they found themselves rolling ever closer to the edge of the landing area.

“It all happened in about eight seconds,” Smith said in a statement. “While we were decelerating we heard a loud snap. When we would normally be coming to a stop, we weren’t. Our years of training kicked in and we reacted on instinct. I slapped back the ditching hatch (Hawkeyes do not have ejection seats) as we cleared the deck and began a deep settle (significant descent). I would guess we were about 10 feet from the water before we lifted back up, but Lt. Smith expertly kept us climbing away. It was a sigh of relief when we were back in the air. It helps to know that at the critical moment, all we practice for this scenario actually works. The experience has made me much more confident in my training.”

After steadying the aircraft, Smith’s focus turned to the crew on the flight deck, who were not so lucky.

The Navy Times reported that while the pilots avoided serious disaster with the aircraft, the crew on the flight deck was not so lucky.

Two Ike sailors and six VAW-123 maintainers were hit by the cable as it whipped across the flight deck. Six were medically evacuated from the ship and treated for injuries ranging from a sprained ankle to broken limbs, a fractured skull, a broken pelvis, torn ligaments and a collapsed artery that almost cost one mechanic his leg.

“The flight back to Norfolk afterwards was long,” Smith said in a statement. “Once we realized the plane was fine, we started to think about the people back on the ship. The Screwtops are a tight-knit family and the pilots are close to our maintainers. We knew some had been hurt and it was a relief to learn those injured were being taken care of.”

The Navy Times also reported that multiple sailors has been disciplined for the mishap.

A command investigation laid the blame with an improperly programmed No. 4 cable, which had thrown an error code earlier in the day. Three sailors in the arresting gear were disciplined for improperly troubleshooting the code, according to the investigation, which caused it to let out too much wire and fail to absorb the force of the landing Hawkeye.

While the incident may have been avoidable, Screwtops’ Executive Officer, Cmdr. Darryl Martin, reminded everyone that it could have been worse had it not been for the three pilots.

“Due to their years of practice and trust in vetted procedures, the crew was able to develop skills and survive the dangerous situation they were presented,” Martin said. “If the right lessons were not captured from the past or if the crew had not paid attention to them, they would not be here today. I am humbly grateful for their proven professionalism, resilience, and respect for the dangerous environment in which we find ourselves daily.” 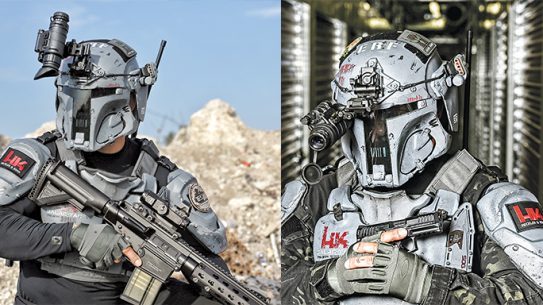 The fantasy world of Star Wars just got much more real as seven manufacturers...