An armed robbery suspect lead Tulsa Police on a wild, seven-minute chase in Oklahoma recently, ramming an officer’s cruiser before fleeing on foot. Police eventually stopped and apprehended the suspect after scaling several backyard fences during the neighborhood chase.

Police arrested Joshua Shamlin for several offenses beside the car chase, according a report published on the department’s Facebook page. The suspect allegedly pulled a box cutter on a female in a parking lot, demanding her purse. Also, authorities believe the suspect pulled the same box cutter at a second location, a male victim. The suspect was finally spotted in a third parking lot, allegedly robbing a third victim. Further, it was here that officers spotted the suspect, according to the report.

Officer dash cam and body cam footage clearly shows a white Ford F150 tearing through a neighborhood, with police in pursuit. Additionally, footage shows the F150 ramming the officer’s cruiser violently, before the suspect fled on foot. Subsequently, police converged on the area, going yard-to-yard, as officers continued attempting to corral the suspect.

Authorities charged Shamlin with two counts of armed robbery, attempted armed robbery, felony eluding, hit and run with an injury, assault with a dangerous weapon, and possession of stolen vehicle. 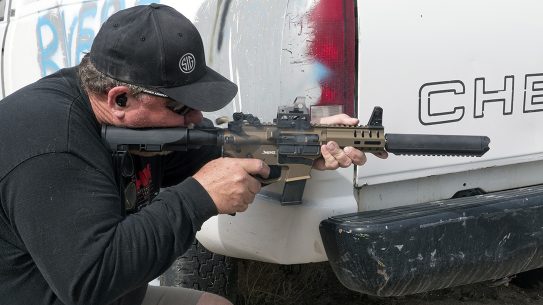