According to WOOD TV, it all began on May 3 when the officers found Carey, 18, while running a truancy check after being notified by Grand Rapids Public Schools that he hadn’t been showing up to class.

In his written report, Prosecutor Chris Becker said the officers approached Carey and had a “cordial” conversation with him, with “absolutely no indication” that things were about to turn violent, FOX17 reported.

Carey initially gave the officers a fake name, but once they ascertained his real identity by getting a picture of him from his probation officer—Mlive says he was absconding from probation, which he was on for firing a gun at a car full of people in 2015—they asked him to step out of the vehicle. Things went south after that.

The body cam footage shows Carey pulling a gun out of his waistband, at which point the officer backs up and yells “gun, gun, gun, gun!”

It’s not obvious in the body cam footage, but the dash cam footage clearly indicates that Carey got off four shots before officers returned fire.

Carey was shot twice and died at an area hospital.

The officers involved were all placed on administrative leave pending the results of the investigation, per standard procedure. Becker has cleared them of any wrongdoing.

If Carey had survived, Becker said, he would have been charged with attempted murder.

“When I watch the footage a few things strike me,” Rahinsky continued. “One is how fortunate the officers were the officers were that they weren’t struck. The fact that shots were fired at them when they still had their weapons holstered and how appropriately and promptly they responded with the appropriate use of force to address at that time what was a deadly threat.”

“It really does emphasize the unpredictability of what those officers, any officer, is dealing with when they approach any situation.”

Two of the officers involved are already back at work, with the third expected to be back this week. 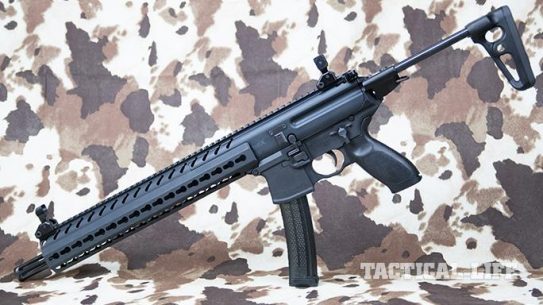 Well-suited to a variety of recreational and professional uses, the Sig MPX 9mm carbine...