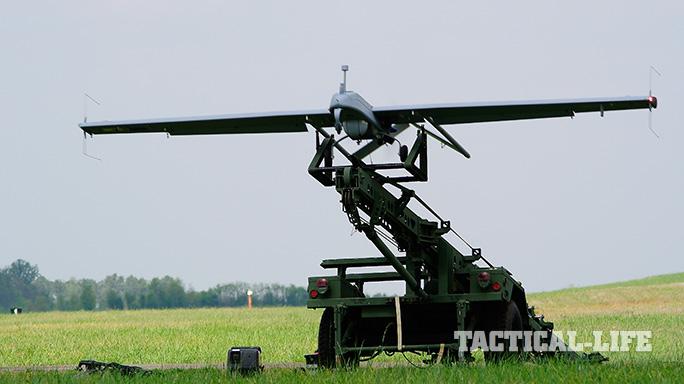 Manned-unmanned operations using helicopters linked with unmanned aircraft systems, or UAS, have been used by the Army for a number of years.

However, no single unit has ever actually been assigned to both assets until now, said Lt. Col. Tory Burgess, product manager for Shadow Tactical UAS.

Burgess and others spoke during a media roundtable from Redstone Arsenal, Alabama, March 19.

It was not just a name change, though. The new unit converted to a heavy attack reconnaissance squadron, equipped with AH-64 Apache Longbow helicopters and the new tactical common data link-equipped RQ-7Bv2 Shadows.

The reflagging ceremony and the unit having the Shadow v2 “organically assigned” to it is the culmination “of years’ worth of planning, development, testing and production,” Burgess said.

“What’s the big deal about a unit owning both assets?” asked a reporter at the roundtable.

Lt. Col. RJ Garcia, commander of 3-6, said, “It’s an improved capability that supports Soldiers on the ground as they execute the various missions that we assign them. Nothing is stove-piped now. We now have the ability to share across multiple levels.”

Until now, aviators, working with Soldiers on the ground, have been using manned-unmanned teaming, “but doing it with friction points because they were never in the same unit,” Garcia said.

For instance, a Shadow unit in a brigade combat team might be in the same forward operating base somewhere and they’d go over to the aviators and say “we’ll connect you to our Shadows. Let’s do this,” and they’d make it so, he said.

“They’ve been building this synergy themselves, but for different commanders,” Garcia said. However, “sometimes that tasking wouldn’t support them working together” and operating through two chains of command.

This formal arrangement removes these “friction points,” he said.

Lethality does not always mean capability to fire missiles. Shadow v2 extends situational awareness across the battlefield, not only for the Soldiers on the ground, but also for the Apache pilots, Garcia said.

The situational awareness, he said, includes the ability of Shadow v2 to “transmit live, real-time, full-motion video to multiple people across the battlefield.”

That situational awareness, he said, extends from mission command at the highest levels all the way down to the tactical level, meaning Soldiers on the ground.

Burgess said that the Apache pilot gains greater situational awareness through the eyes and sensors on the Shadow v2, which affords him or her greater standoff range.

Security was a top priority when Shadow v2 was designed, he said. The tactical common data link provides Type I encryption so adversaries cannot see the data being streamed or take control of the UAS.

Both the Shadow v2 and the Gray Eagle UAS can fly off the Universal Ground Control Station, or UGCS, which Burgess called “the centerpiece of Army UAS.” This enables the AH-64E pilot a considerable level of operability with the UAS system, up to level four.

Lt. Col. Ed Vedder explained in an interview last year the various levels of control and how manned-unmanned teaming works. His 1st Infantry Division battalion was the first to demonstrate teaming between AH-64Es and Gray Eagles.

While the Apaches have pilots in the cockpit, the UASs are piloted by Soldiers – usually enlisted – on the ground in universal ground control stations, he said.

If a request is made by an Apache pilot to take temporary control of the UAV or UAVs, that can happen, Vedder continued, but if or when it’s done, it’s normally for just a brief period of time.

Both UAS and Apache pilots train together and work together so the handoff and hand-back of control is seamless, he said.

“It’s very intuitive” for an Apache pilot to fly a UAS,” Vedder said. The pilot just “draws up some wave points then asks for level four control.

“Once he gives you that authority you can send that aircraft down a route, select intelligence, speed, orbit, and when it hits a checkpoint, you can say ‘I’m going to look at this grid’ and a sensor will do that,” he explained.

“The rest of time, the pilot is operating his Apache,” Vedder said. “It’s not as complicated as it may seem. It’s a powerful capability.”

Ground operators do so well flying the UAS that Apache pilots will usually just let them operate them, he said, adding that the relationship established between them is excellent.

When Vedder spoke of level four, he was referring to the Apache pilot’s level of interoperability, or LOI, over the UAV.

Garcia said he takes great pride in his unit, commenting that “we’re the first Apache battalion to convert to the heavy attack reconnaissance squadron. We were also the first unit to field Apaches in the 1980s.”

In May 2014, Garcia’s Soldiers conducted “a successful operational test” with the Apache-Shadow v2, held as part of Network Integration Evaluation 14.2. That is significant, he said, because the same Soldiers doing the testing are now doing the manned-unmanned teaming.

Operators, maintainers and leadership are undergoing final training on the new system. That training is projected to be completed by the end of May 2015, he said.

Burgess said that “we are finally getting to the point where we can field two to three [Shadow v2] systems a month to the entire U.S. Army, including the combat aviation brigades.”

“We continue to improve on [tactics, techniques and procedures],” Garcia said. “As Soldiers go through Shadow v2 training they will apply lessons learned and share those lessons with other Soldiers who will be making the same transition in the future.”

“Within the history of manned-unmanned teaming, the Shadow and the Apache have had an incredible combat record,” Garcia said. “This merging is really about the Soldier on the ground. We’re much more efficient, lethal and effective. We’re going to build on the great things that Soldiers across multiple organizations within the U.S. Army have done to be better.” 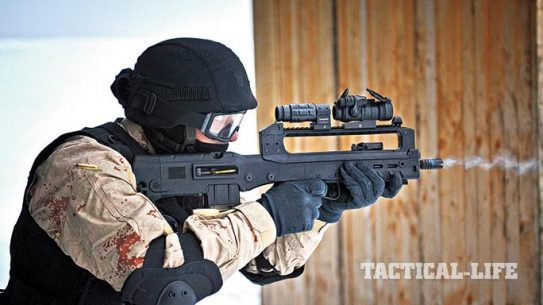 Select-fire combat rifle takes on terrorists in the mountains of Afghanistan!