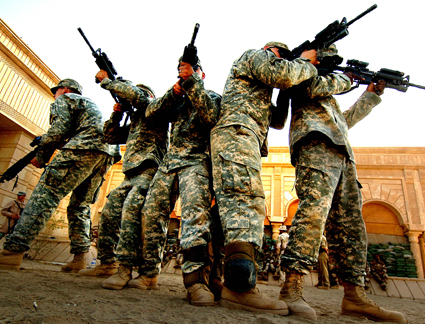 WASHINGTON (Army News Service, May 13, 2009) — For fiscal year 2010, the Army has requested in its base budget $142 billion dollars for a range of expenditures that include a focus on taking care of Soldiers and their families.

Also significant in the budget request, forwarded last week by the president to Congress, are items that have been trimmed. Portions of Future Combat Systems have been cut, for instance, as has the Army’s ownership of the Joint Cargo Aircraft. And both enlistment and re-enlistment bonuses have been reduced.

“One of the main themes is taking care of families and Soldiers,” said William H. Campbell, acting director, Army Budget Office. “That’s a theme both the secretary of Defense, the secretary of the Army, and the chief of staff of the Army have emphasized as we built this budget.”

Included in those family- and Soldier-friendly budget requests are funding for Soldier programs, wounded warrior programs, increases to child care centers and services, and an increase in family-support activities. Also included are increases in the quality of facilities, Campbell said.

The costs of providing for such things as warfighter and family services; childcare and youth programs; morale, welfare, and recreation; and voluntary education/tuition assistance are part of a more than $40 billion operations and maintenance expenditure. Those O&M funds also include recruiting, training, and maintenance of equipment, facilities and infrastructure.

The budget also includes provisions that will affect the wallets of Soldiers and Department of the Army civilians — a pay increase of 2.9 percent for Soldiers and 2 percent for civilians, said Lt. Gen. Edgar E. Stanton III, military deputy for budget.

This year there’s funding in the military personnel budget for 547,400 active-duty Soldiers, 358,200 Army National Guardsmen, and 205,000 Reserve Soldiers. With the increases in Soldier funding, the Army has met its growth goals. More Soldiers in the mix translates to more time at home and more robust training, according to Stanton.

“The Army in all three components has achieved its projected strength levels and we will stay at those strength levels both in the short term and the mid-term,” Stanton said. “The focus now will be on utilizing the Army Force Generation model as we hope to increase dwell and reduce deployed time. That will allow us to refocus training for the full spectrum operations as opposed to the current emphasis on COIN (Counter-Insurgency).”

Campbell also said the Secretary of Defense decided to not stand up three additional brigades and to instead use those Soldiers to bolster the manning of other units.

“That will help fill out units,” Campbell said. “It’ll decrease the need to cross-level between units as forces begin to deploy. And combined with a structured delivered drawdown plan that will reduce demand, we should see an increase in dwell time for units.”

Re-enlistment bonuses have gone down from 2009 to 2010 because of the success of the Army in both re-enlistment and recruitment, said Campbell.

From FCS, the entire line of manned ground vehicles — eight systems all based on a common chassis — have been canceled.

“(Secretary of Defense Robert Gate’s) guidance … directs that the Army will restructure its Future Combat Systems,” Stanton said. “This includes halting the development and production of the manned ground vehicles and directs that the Army relook at the requirement for the vehicle in the context of the current fight as well as the future fight and come forward with a new concept for an MGV.”

Stanton said Gates, Secretary of the Army Pete Geren, and Chief of Staff of the Army Gen. George W. Casey Jr. have directed research into a new manned ground vehicle be completed by the Army’s Training and Doctrine Command.

Despite the loss of FCS’s MGVs, the fruits of the work done by researchers will continue to be pushed to the field through “spinouts,” Stanton said.

“We will roll out the spinouts, these are tactical unmanned sensors, unmanned aerial sensors and the non-line-of-sight launch system,” Stanton said. “That technology, as it comes to fruition, will be rolled out to all brigade combat teams and done so in an accelerated manner. We will do it to all 73 BCTs and not just 15 BCTs. We are going to start in 2011 and finish in about 2025. It’s going to take time, clearly, to get to all 73.”

Also significant about the FY 2010 budget cycle is that both the base budget and the $83 billion “Overseas Contingency Operations” budget were submitted at the same time — in prior years that OCO budget was called a “supplemental” and was submitted after the base Army budget.

The base budget is specifically for funding training and equipping of the Army. The OCO budget is meant to address expenses related to actual Army operations.