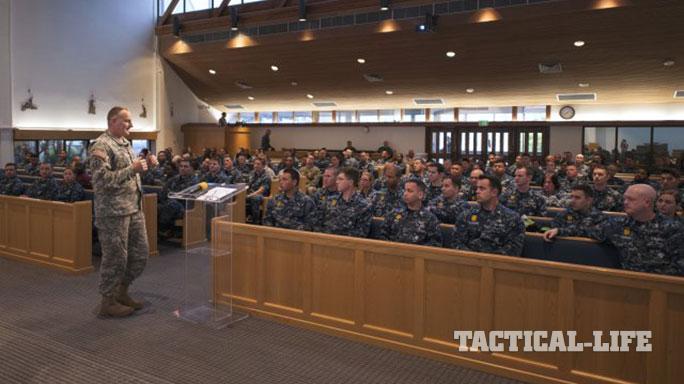 Lt. Col. George Corbari, assigned to Army Pacific Command, leads a suicide awareness and prevention presentation for Service members stationed at Joint Base Pearl Harbor-Hickam. Corbari, who fought his own battle with suicide, provided guidance for Service members and leaders on dealing with and overcoming adversity.
Comment(s)

The following is a press release from the U.S. Army:

Lt. Col. George Corbari shared his own personal story against the struggles of suicidal thoughts and discussed strategies Service members can use to help themselves overcome similar obstacles during a suicide awareness presentation at Joint Base Pearl Harbor-Hickam Memorial Chapel, Jan. 14.

Corbari, strategic plans and policy officer at U.S. Army Pacific, or USARPAC, shared his own story during the presentation, “Piercing the Darkness: Redefining Perceptions about Suicide.” During his remarks, he discussed modest, employable strategies Service members and senior leadership can employ in the workplace to aid against suicidal ideations.

According to Capt. William Kennedy, command chaplain for the commander of Navy Region Hawaii, raising suicide awareness is vital to accomplishing the Navy’s mission, as each Sailor and their family, plays an integral part toward the Navy’s success.

In the case of Corbari, life seemed to spiral out of control in 2009, when his son attempted to take his life, when he and his wife’s yearlong adoption process almost unraveled, and finally when his son-in-law was severely injured by an improvised explosive device during his deployment to Afghanistan.

Hiding his emotions from his wife and feeling as though he had no one to turn to, Corbari said he began to internalize his feelings and blame himself for the events that had unfolded.

“When you get to a point that those things become so crushing to you, your mind starts to play some tricks on you and that’s when you start to get into the darkness,” Corbari said.

It wasn’t until friends he met during intermediate level education, or ILE, noticed him “checking out,” and confronted him that he was able to navigate through his feelings and pull himself out of the darkness he found himself in.

“They attacked what was important to me, what they knew I really valued and that’s how they were able to break through the darkness,” he said. “So, it was what they did for me that helped me start to process things the right way and saved me from doing something harmful to myself.”

Corbari said trustworthy relationships between Service members and shipmates can go a long way toward opening avenues of communications for someone who may be having suicidal ideations.

“If you don’t know me, you also don’t know the things to drill in me that are important to me,” he said. “And you can ask me the questions, but I may deflect them, I may lie to you … It doesn’t require huge amounts of training, just me building relationships with my shipmates can help someone from doing harm to themselves or me from doing harm to myself.”

“Corbari really has ‘his hand on a pulse’ that relationships and the connectedness of the relationship makes all the difference in being successful in preventing suicide and creating a network of support,” Bingol said. “It reminded me of an old saying, ‘People don’t care how much you know until they know how much you care,’ and, in a nutshell, by knowing how much you care for people enables us to actually go into the dark spaces of their life and walk with them toward better alternatives and recovery.”

For Logistics Specialist 1st Class Lisa Mendez, assigned to U.S. Navy Supply Systems Command Fleet Logistics Center, Corbari’s story reinforced the notion that a person’s career will not end because they may be struggling with suicidal ideations.

“When a person speaks out about their struggle with suicide and is that much higher ranking, it really sets the tone that it’s not going to end your career,” Mendez said. “And at the end of the day, a lot of people are worried about that.” 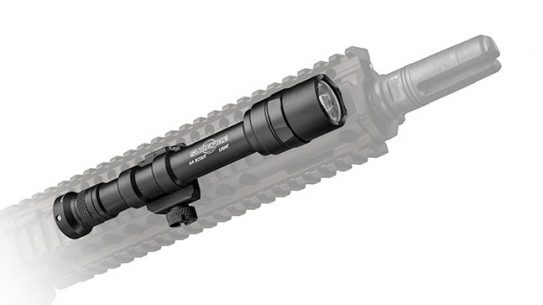 The all new M600 AA Scout Light from SureFire features a solid-state LED that...