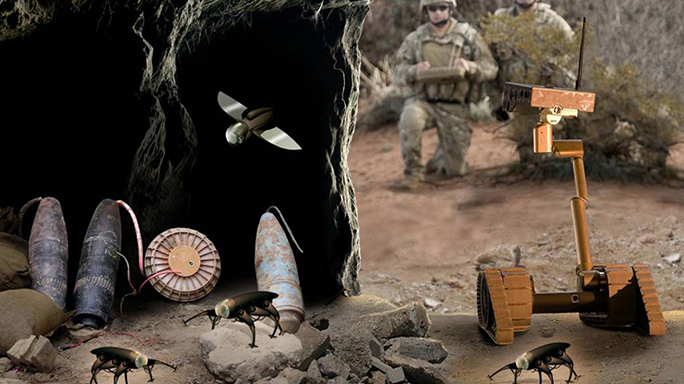 The following is a release from Jenna Brady, ARL Public Affairs:

Supported by the U.S. Army Research Laboratory, University of California-Berkeley researchers have developed a small, crawling robot that mimics a cockroach’s ability to squeeze through confined spaces.

A report by UC Berkeley researchers Dr. Kaushik Jayaram and Dr. Robert Full is featured in the latest edition of Proceedings of the National Academy of Sciences.

Cockroach exoskeletons inspired them to manufacture an origami-style, soft, legged robot that can move around rapidly in both open and confined spaces.

These spaces include rubble generated by natural disasters and explosions that first responders may not be able to access in emergencies.

The robot, which is palm-sized, is known as CRAM for “compressible robot with articulated mechanisms.”

While currently a prototype, researchers see great possibilities for this insect-inspired technology, which will be tested in real-world disasters when a more robust version is developed.

Dr. Brett Piekarski, cooperative-agreement manager of the MAST CTA, said its goal is to develop and explore the underpinning science to enable increased situational awareness for the dismounted Soldier in complex, real-world environments by enabling increased autonomy, collaboration, and mobility of micro-aerial and ground-based autonomous systems.

“The research at UC Berkeley is exploring bio-inspired mobility and control methods that can be applied to future Army autonomous robotic systems,” Piekarski said. “Over the course of the program, they have performed research in many areas from how insects can maneuver and transition over and through varying surfaces, to how lizards use their tails to maintain stability over rugged terrain or to maneuver rapidly, to bio-inspired self-righting technologies that have led to a joint project with ARL, and to the focus of the recent paper on how cockroaches maneuver through very small cracks.”

Piekarski said these studies are providing new discoveries that will lead to innovations in how future micro-autonomous systems will operate and rapidly maneuver through complex 3-D terrains.

Kessens, a robotic-manipulation research engineer, is developing an analysis framework for determining self-righting solutions; that is, getting a robot back on its feet/wheels/tracks after tipping over. It was designed to analyze how any given robot may utilize its available appendages or other means of movement for self-righting. The goal is to apply the framework to existing fielded systems as well as future systems, whatever they may look like.

“The software that we have developed at ARL analyzes and evaluates any given robot’s ability to return to its preferred orientation after tipping over,” Kessens said. “UC Berkeley’s group and I are using it to understand the relationship between the wing geometries of various cockroaches and the methods they choose for righting. We have been testing these on cockroach-inspired, self-righting robots they’ve been developing.”

Kessens said they hope to better understand what mechanical and energetic advantages the cockroach’s righting strategy offers for robotics applications.

Kessens said cockroach-inspired, self-righting robots would be a valuable asset on the battlefield.

“Soldiers have reported tip-over of existing robotic systems as a significant issue,” he said. “The very rugged terrain and dynamic conditions experienced in the field can cause robots to turn upside down, leading to mission delays and risking loss of these valuable robotic tools that Soldiers need to complete their missions.”

Kessens noted that it is almost inevitable that at some point on a mission this problem will be experienced, and once a tip-over occurs, it can be very challenging for an operator to determine how to right a robot. Operators often cannot directly see the robot, and cameras on the robot might be looking at the ground or the sky, making it difficult to know how the robot is oriented or positioned.

“One Solider I spoke with valued his robot so much that he got out of the safety of his vehicle to rescue it when he was unable to get it back on its tracks after many attempts. This is exactly what we do not want, and Soldiers should not be tempted to risk themselves for a robot,” Kessens said.

So, while some may view them as a nuisance, researchers are working to put the capabilities of cockroaches and similar insects to use to provide both civilian and military operations with technological support that could save lives in times of crisis. 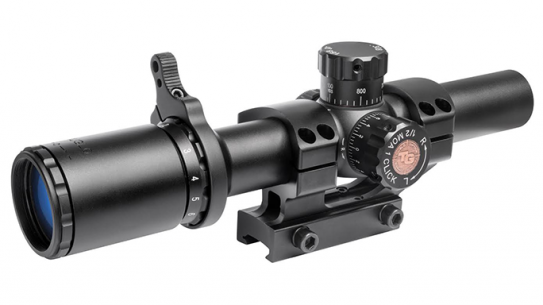 The all new Tru-Brite 30 series from Truglo features a 30mm tube for increased...