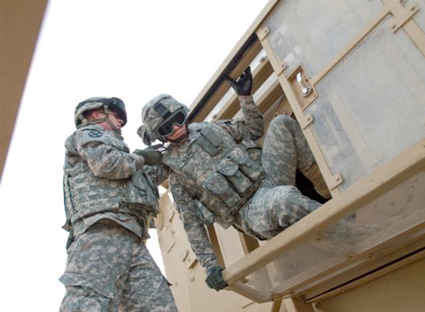 CAMP BUEHRING, Kuwait – The U.S. military is fielding a new vehicle rollover simulator to troops in Iraq and Afghanistan.

The simulator is the Mine-Resistant Ambush-Protected Egress Trainer, or MET, and is the military’s latest initiative to prepare troops how to react in the event of a rollover.

“The training was definitely beneficial,” said Sgt. 1st Class Marlon L. Williamson, first sergeant with Headquarters Company, 49th Movement Control Battalion, after going through the training. “Hopefully all Soldiers will be able to go through this so they experience what it feels like to go through a rollover just in case they do become a part of one.”

The MET consists of a vehicle cab mounted to two rotating wheels on a raised platform, and is based on an earlier humvee rollover trainer.

Unlike its predecessor, however, the MET comes in five variants for different MRAP models currently fielded by the military – the RG-33, RG-31, MaxxPro, Caiman and Cougar.

Although the MET system currently exists at only three locations – Camp Buehring and two camps in Afghanistan – this will soon change.

By the end of June, MET systems will spread to 20 locations, including 13 camps in Iraq and six in Afghanistan, said Bill Huggins, the project manager for Program Executive Office for Simulation, Training, and Instrumentation in Southwest Asia.

PEO-STRI is an Army agency responsible for developing and fielding new equipment.

Huggins said approximately half of the MET systems will be delivered to the 3d Sustainment Command (Expeditionary) in Iraq.

Future production models will be built with the ability to change out cabs to meet the training needs of troops at a given camp, Huggins said.

“Initially each site will only have a MaxxPro cab,” Huggins said. “As the … priorities from theater are determined, those follow on cabs will be built and shipped later.”

Because Buehring has three MET systems and three civilian trainers, it is capable of training up to 300 troops per day; at sites where only one system is available that number will be between 100 and 120, Huggins said.

Camp Buehring was selected as the location for three of the five initial trainers because it serves as the gateway to the Iraq theater and “touches every unit that deploys to Iraq,” said Capt. Anthony A. Wheeler, an operations training officer for United Stated Army Central G3 (Forward) Training.

While many troops have applauded the prototype MET systems at Buehring, they have not been without some hiccups, training officials said. Recently, during one training session an escape hatch broke off its hinges when a Soldier attempted to climb out of a vehicle.

Huggins said it’s not uncommon to encounter issues when equipment is fielded quickly because it hasn’t undergone the usual two years of extensive testing.

“The bigger interest is getting training capability to the warfighters,” Huggins said, noting these issues will be corrected on the “production” models fielded in coming weeks.