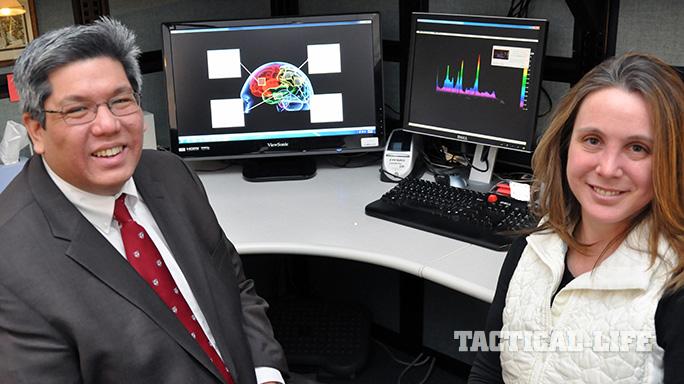 The following is a release from Bob Reinart and the U.S. Army:

Researchers from the Army and Harvard Medical School are collaborating on a Department of Defense-funded study to identify chemical biomarkers that could differentiate between post-traumatic stress disorder, or PTSD, and mild traumatic brain injury, also known as mTBI.

The study, which began five years ago with a Harvard catalyst pilot grant, involves personnel from the U.S. Army Research Institute of Environmental Medicine and Brigham and Women’s Hospital, the teaching hospital of Harvard Medical School. They are working to find better ways to treat warfighters returning home with one or both of the conditions.

“We’re hoping that by looking at subtle differences in brain chemistry, we might be able to more easily, more efficiently, differentiate the conditions, which ultimately will help us direct treatment approaches more efficiently and effectively,” said Dr. Kristin Heaton, a research psychologist at USARIEM.

Dr. Alexander Lin, director of the Center for Clinical Spectroscopy in the Department of Radiology at Brigham and Women’s, is using magnetic resonance spectroscopy to non-invasively measure chemical concentrations in the brains of 330 study subjects, including active-duty Service members, National Guardsmen, Reservists, veterans and civilian controls.

“One of the key things for us coming in and talking with Kristin was to better understand what is the main problem here, what are the things that we could do to solve the problem that the military has?” Lin said. “We look at different brain regions and what kind of changes we see in chemistry there. We call it chemical topography.”

“We’re using some tests that are commonly used for screening for mild traumatic brain injury and for post-traumatic stress,” Heaton said. “I’m using those tests to help validate the brain chemistry data that we’re getting.

“Using the cognitive tests as indicators of function, and then linking this data up with the brain chemistry results, we can create a more complete picture of brain health to work from.”

The study’s data will be used by Draper Laboratories for modeling.

“They’re the number crunchers,” Lin said. “Their role is to take all this data that we’re giving them from the chemistry standpoint, as well as … all neuropsychological information that Kristin is bringing into this, and fuse it together.”

Lin pointed out that it will take input from all the study partners to make this a successful effort.

“This is not going to be the silver bullet,” Lin said. “It’s got to be everything kind of coming together that forms the picture of what is going on in the brain.”

Heaton said that she and Lin are about halfway through their data collection.

“It is difficult finding [participants] who meet our inclusion criteria, and we knew that going into the study,” Heaton said. “We knew that was going to be a challenge.”

Separating out mTBI and PTSD has important implications for future treatments.

“We can look at this chemistry and target certain medications for treatment,” said Lin, adding that such applications could be as close as five years away.

Heaton added that this research might help identify potential preventive measures for warfighters before they deploy.

“If we can predict in advance who might be more vulnerable to injury or to functional changes … that would then provide us with information as to how we might be able to intervene with training programs or pharmacotherapies,” Heaton said. “It’s like body armor. It’s brain armor.”

USARIEM’s proximity to Brigham and Women’s has made for a smooth collaboration between Heaton and Lin.

“Kristin and I talk back and forth constantly,” Lin said. “We see each other all the time.”

“It’s absolutely critical,” Heaton said. “We are close to so many high-level academic institutions, hospitals. The biomedical activity in the Boston area is world renowned.

“We’re just so well situated, and taking advantage of that is a priority, because we can leverage so much more through these partnerships than if we were, I think, anywhere else.”

For more information on the study, visit http://bit.ly/bwh_study. 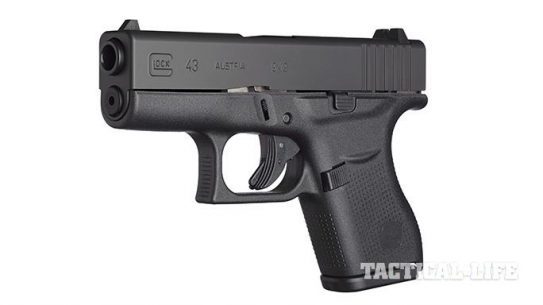 Glock revolutionizes the concealed-carry world once again with its brand-new Glock 43 in 9mm,...